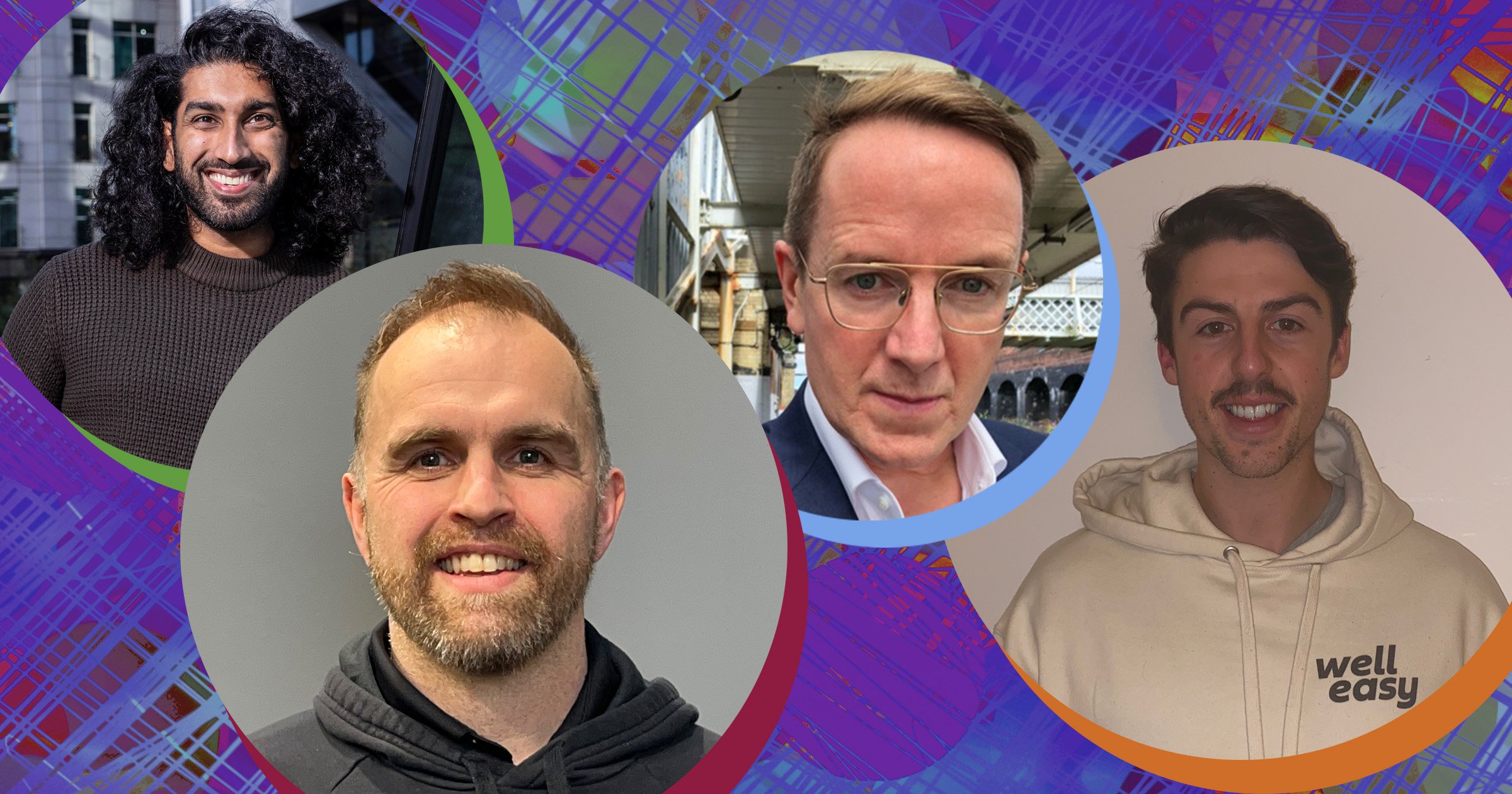 Today gives us an opportunity to reflect on these problems and see that actually, many of the circumstances men face today are a product of the patriarchy (that does an even bigger disservice to women).

Metro.co.uk spoke to men about their genuine concerns regarding their gender in today’s society.

Their responses go to show that gender stereotypes and norms all, in the end, put us at a disadvantage.

Sonny Drinkwater, a 23-year-old working in the healthy grocery industry for Well Easy, tells us mental health is still a burning issue among men and that it ‘worries’ him.

By now we all know the terrifying statistic that suicide is the biggest killer of men under 45, and this doesn’t surprise Sonny, who lives with Obsessive Compulsive Disorder (OCD).

‘I think I’ve had obsessive tendencies all of my life when I look back. It reared its ugly head however during university and I really struggled with intrusive thoughts,’ he says.

‘It can be hard to explain intrusive thoughts to someone that’s never suffered, but when you’re in the grips of OCD, it’s terrifying.’

Upon diagnosis, he struggled to accept his illness at first, partly due to the attitudes that can be typically on men and mental health.

‘As someone that’s always been competitive, it can be hard to openly show any signs of “weakness” – which despite what people say is still how mental health is perceived by a lot of men today,’ he explains.

‘It’s easier to conform than it is to challenge, and I think men have a very hard time detaching from pride and ego.’

He is grateful when successful men in the public eye share their stories of mental health struggles, as it helps normalise the deep-rooted issue that is at odds with ideals of masculinity.

A study by youth charity Stem4 on 18 to 21-year-old men found that 46% of were currently experiencing mental health difficulties.

Of those men, 53% had not spoken to anyone about their welfare.

Over half of all the men surveyed said they wouldn’t ask for help if they were experiencing poor mental health, with some adding they’d ‘feel less masculine’ for doing so while other reported feeling ‘ashamed’ – and 15% said they don’t know how to ask for help.

Sonny believes what needs to change is how mental health is showcased differently to physical health, believing men need to see their potential to ‘strengthen’ their headspaces as they do their bodies.

‘Look after it and champion that process rather than seeing it as an unchangeable flaw,’ he adds.

At work, where it can be particularly challenging to disclose mental health issues, Sonny leads with his in the hopes it will inspire other male colleagues to do the same.

‘I want to help change the narrative,’ he says, ‘I was at first a little skeptical about being vocal around mental health and my own personal experiences, especially when it came to investors, but there’s been a few that have even opened up about their own stories.’

Nick Wardle, a 40-year-old owner of Loughborough’s Body Transformation Centre thinks men need to be careful when it comes to their bodies as well as their minds.

Thanks to Love Island and Instagram influencers, men are faced with a body standard: a defined six pack with a deep ‘V’, biceps and thick quads.

Nick believes there’s more pressure to look a certain way now than men have experienced before.

‘The majority of men want a flat stomach and to get rid of their love handles – and I’d say they’re under more pressure to achieve this,’ he says.

‘When you consider the imagery that’s portrayed everywhere – even on men’s health products – of the guys with well-toned bodies, it’s no wonder.’

He believes this can be attributed to people spending more time online, which is ‘impacting on how we think about ourselves more than ever’.

‘I think we don’t discuss men’s body image enough. I do think it’s been overlooked, and more than people realise,’ he says.

Nick’s biggest concern for men is the time span in which body changes can be achieved. In an age in which everything is instant, a danger has emerged.

A study published in June 2019 suggests that body dysmorphia with a particular focus on muscles in men may be rising.

Nick tells us: ‘It’s the way the fitness industry now presents everything. Everything is a quick fix, about getting a six-week shed, or even dramatic results in four weeks, for example.

‘Today, there’s an expectation that people get results after shorter time spans and this is partly down to people needing to see results quickly to stay motivated.’

One issue specific to men that many people reached out to say they were concerned about is toxic masculinity.

Dr Nihara Krause, psychologist and founder of Stem4, tells us: ‘Toxic masculinity is a term used to refer to cultural pressures on men to communicate and behave in a particular way, for example, to act tough.’

When it comes to mental health, this can stop men getting the help they need.

‘In both education and workplaces there is currently good discussion around promoting the concept that “it’s ok to not be ok”’ while encouraging boys and men to reach out and talk,’ Dr Nihara says.

‘Toxic masculinity however directly contradicts this since the message is that “it’s not ok to not be ok” if when boys and men talk they feel unheard, dismissed or told to man up.’

But that isn’t the only thing toxic masculinity complicates.

Patrick Reid, a 51 year old FX trader, says he’s seen it play out alongside sexism at work, affecting the way women are treated in the office by their male counterparts.

Having been in the male-dominated industry for 15 years, he’s seen ‘pretty much the whole spectrum, from “light hearted” jokes to outright dismissiveness and verbal attacks’.

‘There was also peer pressure to “up the ante” in making comments, which was terrible,’ he says.

‘But I worry because the “boys will be boys” idea to some is an accepted form of bad behaviour – not just on the trading floor. We need to stop living in the past and realise this is not acceptable.

‘A lot of it comes from the school playground and today in new social media,’ he says.

Admitting that in the past he too engaged in this kind of behaviour, he’s done the work to fix this within himself and now tries to prevent this attitude presenting itself in others.

‘I grew up in the 1970s when a lot of things were “acceptable” and now thankfully they are not,’ he says, but thinks there is still some way to go.

Women aside, toxic masculinity affects the way men treat their peers, as Patrick has experienced.

‘One time I had a bad trading day at work and I was really upset – almost in tears,’ he remembers.

‘The head of our desk came up and put his arm around me. I thought he was going to comfort me but he said: “you see that girl over there”, pointing to a girl at the other side of the room, “you and her are the same – you both don’t have any balls.”

‘Another time we were in the local café getting breakfast and I ordered a blueberry smoothie. Everyone else ordered bacon sarnies. I got slapped on my face and told to wise up. I ordered a bacon sarnie after that.’

Though there is perhaps a generational divide at play here, some believe there is no such thing as toxic masculinity in our society anymore. Patrick disagrees.

Now at his company there is a resident female psychologist to help ‘teach the dangers’ of this perception of masculinity.

He says: ‘She works with us through group coaching and one-to-one sessions, but also she has interviewed me in a series of programmes as we discuss the challenges and fear of being macho, accepted and ridiculed as a trader

‘We are looking at the dark side of trader lifestyle and peer pressure which dovetails into toxic macho-ness. Prevention is better than cure.’

If you’re in a group with largely different views to your own, as Patrick has experienced, isolation can begin to take hold.

31-year-old Josh Sandhu, a co-founder of Quantus Gallery living in Cardiff, says loneliness can be especially rife among men.

‘Of course, it’s an issue that impacts all of us,’ Josh says, ‘but with men, whether you have a circle of friends or not, there isn’t necessarily that space to be vulnerable and talk about problems you might be going through.

‘It can feel very lonely because even if you have that outlet, you might not know how to without a whole lot of frustration.’

Socially, men on the whole haven’t been encouraged to speak up when there’s a problem – rather, to embrace anger over other negative emotions.

Josh continues: ‘We’re not really encouraged to form close emotional bonds with our friends – I think that’s a large reason why our circles tend to get smaller and smaller as the years go by.

‘Also, there’s a lot of men who wouldn’t really know what to do if a friend needed emotional support.’

He worries about – without saying the word – incel culture, because ‘there’s a warped view from some men who do suffer from loneliness, and for them they might specifically focus on intimacy and not having a partner as the core issue as to why they’re feeling the way that they are.

‘That can become quite dark very quickly.

‘All their ire is at women specifically instead of the expectations and roles men are “supposed” to have.

‘The fact is that we’re not socialised or taught to deal with our emotions and talk about them. So when you have that mixed with the isolation large swathes of men find themselves in, it’s a pretty terrible concoction.

‘I know that a lot of men have a visceral reaction when they hear the word feminism, and that’s simply a lack of understanding of the goals and how men’s issues are core to it.’

Ultimately, he feels men need to come at the issues with ‘a whole lot more with compassion and judgement’.

The other complexity he shares, being of Indian heritage, is that some minority cultures may value traditional notions of masculinity that ‘stand in stark contrast to liberal values’.

‘It’s an added complexity that men of minority heritage have to deal with,’ Josh adds.

Men clearly have their gender-driven battles, and an ever-changing social set up has shifted what’s most pressing.

One thing that’s needed in abundance: the normalising of talking.

These problems won’t be fixed in a vacuum – they rely on wider systemic changes that both men and women have been calling for.

Dan Bell, CEO of the Men and Boys Coalition, tells Metro.co.uk: ‘There is an incredible network of charities, practitioners and academics in the UK who are doing crucial, unsung work on the ground to support men and boys and raise awareness of the many issues they face – often on a shoestring budget and with a lack of support from government.’

He is involved in the team that put together International Men’s Day, which aims to bring issues surrounding men into the spotlight.

He adds: ‘It is time for policy makers to take heed of the work of these individuals and organisations that are re-shaping the understanding of, and provision for, issues of disadvantage that disproportionately affect men and boys in the UK.’