Opposition Leader Anthony Albanese has made a pitch for Labor to deliver a “sound, considered, honest” government, saying the party is ready to replace the Coalition after eight years in the political wilderness.

Addressing the faithful at the ALP’s virtual national conference on Tuesday night, Mr Albanese said a government he led would back the aspirations of all Australian families for a better life as the country clawed its way out of a coronavirus-induced economic downturn. 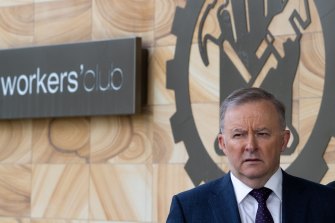 Preparing his party to head to the polls any time within the next 15 months, the Labor leader said he would lead a government that faced up to reality, listened to Australians and had genuine empathy for people’s concerns.

Nodding to the Morrison government’s string of scandals over sexual assault allegations and treatment of women, Mr Albanese said Labor had heard the women of Australia “loudly and clearly”.

“While we must do better on child care, on workplace rights, on closing the pay gap, on women’s safety and on representation within our parliaments, we need a seismic cultural shift,” Mr Albanese said on the virtual stage at Revesby Workers’ Club in Sydney’s south-west.

“You can’t seize a moment if you don’t understand it in the first place. And a Prime Minister who keeps [disgraced MP] Andrew Laming in his party room but removes [former Australia Post CEO] Christine Holgate from her public service position just doesn’t get it.”

Mr Albanese said he wanted to be a prime minister “for every Australian”.

He said senior Labor women, led by Tanya Plibersek, would lead the process of further developing a comprehensive women’s policy to take to the next election.

“It will be a policy that delivers on the two most important aims: women’s economic security and independence, and safety,” he said. “These aims are indivisible. Labor has always led on gender equality.”

Mr Albanese was played onto the stage by veteran Australian rocker Jimmy Barnes and delivered his speech to more than 400 delegates around Australia and supporters watching live on YouTube.

The party adopted a new policy to formally consult with affected unions about the impact of any proposed trade agreement and will commit to campaigning against deals that don’t comply.

The Electrical Trades Union accused the party of hypocrisy and criticised past oppositions for not publicly speaking out against free-trade agreements while denouncing them in private.

The Health Workers’ Union failed to gain the support to demand Labor refuse to subsidise or support private health providers should it win government. It also wanted a future Labor government not to award private health contracts without first guaranteeing the pay, conditions and jobs of public workers.

Former Labor MP Michael Danby, a long-time champion of Israel, was denied a chance to speak against a motion calling on a Labor government to recognise Palestine as a state.

“Associating Labor with a homophobic, undemocratic, divided, kleptocratic, misogynist Palestinian regime is bizarre enough,” Mr Danby said. “But attempting to create the false impression that this is accepted by all delegates is worthy of Stalin.”

He said it was a day that would live “in infamy for true friends of Israel” and a just peace in the Middle East.

“There’s no lesser or greater weight and the position is replicated. It is a position which recognises the views of the conference in relation to statehood,” Senator Wong said.

Labor reached a factional deal to water down a strong denunciation of China’s regional transgressions and mass human rights violations as “not the actions of a responsible global power”.

Senator Wong would be given the job of healing a tense relationship with Beijing should the opposition win the next election.

“Whatever we call this, there are serious, credible reports of egregious violations of human rights,” she said. “I would say this, and I’ve said this previously – publicly and about China – these are not the actions of a responsible global power.”