Steph, 37, who hosted The Steph Show from her home in Yorkshire for two months during the coronavirus lockdown, launched the new lunchtime programme on Channel 4 today.

The former BBC presenter was joined in the studio in Leeds with a host of fellow presenters, including GBBO host Matt Lucas, Vogue Williams, Miquita Oliver, Gemma Atkinson, Lady Leshurr and Angus Deayton.

Despite it’s impressive line-up, viewers slated the programme and questioned the sound quality and production on the show, with one commenting: ‘Packed Lunch seems devoid of anything. Sound is awful as well. Why didn’t they just bring back The Big Breakfast?’ 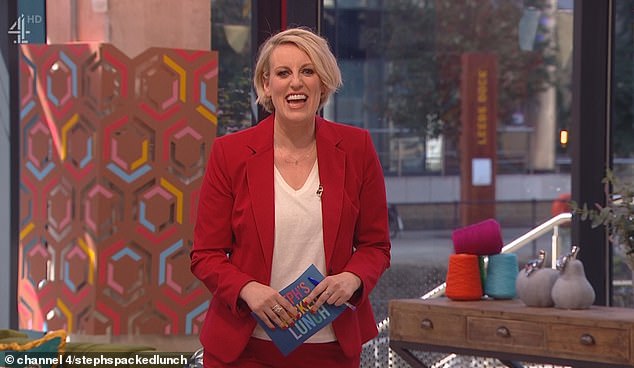 Another wrote: ‘Turn down her mic – Angus Deaton does not need her fake laughing. It’s so cringeworthy.’

In one segment towards the end of the programme, Steph told viewers she was  looking forward to hosting the show’s first ever game.

She explained: ‘We could be about to make one deserving viewer £1,000 richer because we’re about to play our new lunchtime game, 4 for a Grand.’

She told viewers that in order to win, they simply needed to answer questions that begin with who, what, how or where.

Viewers were critical of the sound quality on the programme, with one calling it ‘awful’ and another saying producers should turn down Steph’s mic

The TV presenter went on to speak with Louise, from Yorkshire, but the audio issues meant it was almost impossible to hear the viewer phoning in.

Less than a minute into the segment, Steph said: ‘Can you hear me? Do you know what we’re going to do, we’re going to sort out the mics because apparently, we can’t hear you.

‘I mean, I can, but maybe it’s just another voice in my head.’

She went on to joke she was ‘just building tension’ ahead of the game and quickly moved onto a cookery segment in the show. 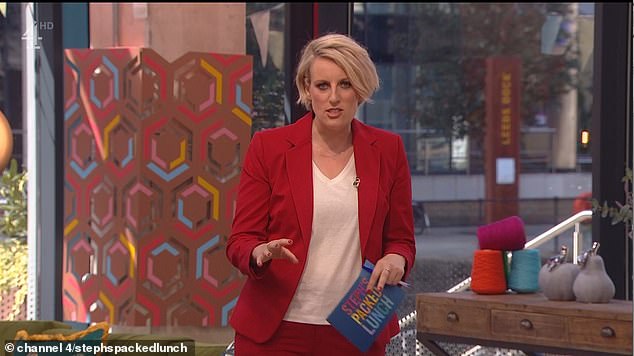 The programme faced issues with sound during its first ever phone-in game, with Steph hastily ditching the segment for a cookery demonstration instead

The blunder wasn’t missed by viewers, with some calling the sound quality ‘awful’.

After the sound was corrected, and Louise was brought back for a phone in, one commented: ‘Thank f*** they’ve sorted the sound issues out.’

But others said that the problems hadn’t stopped them enjoying the programme, adding: ‘Really enjoying the first Packed Lunch. Steph doing a superb job as always, so warm and down to earth like a great mate but on the telebox.

‘A few issues with the sound but it is live and hopefully that’ll be ironed out over the next few shows.’ 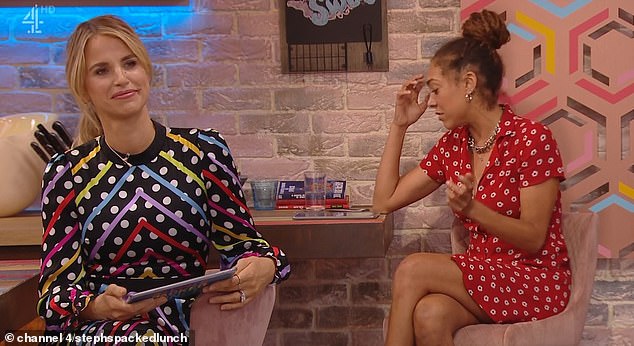 Explaining their decision to stick with the original launch date, despite being in lockdown, Steph told her followers at the time: ‘Everything is surreal, everything is strange, you know, the word ‘unprecedented’ has never been used so much in our lives has it?

‘And I just felt like we either postpone the show, because we’ve got to keep everyone safe, or we do it from my front room.

‘And if you’d have asked me six months ago: ‘How would you feel about doing a show from your front room?’ I would have said: ‘No way’. But now I’m like “Yes way” because I want to get on air.

‘I’m itching to get on and start talking to people, do something fun and do what I’ve done all my career, which is just find out what’s going on out there, and do that with everyone together.’