Former deputy prime minister and coal mining executive Mark Vaile has blamed a campaign led by activists and minority groups for his decision to quit as chancellor of the University of Newcastle before even starting the role.

Firing back at the coalition of environmental groups, students, staff and potential donors who opposed his appointment, Mr Vaile condemned a “dangerous style of activism” he said was waged against him and the university over his coal links, leading to his decision to walk away on Monday. 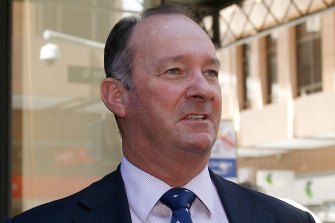 Mark Vaile, who quit as chancellor of Newcastle University weeks after he was appointed, has hit out at an “unfair campaign” he claims was waged against him over his links to the fossil fuel industry.Credit:Daniel Munoz

“This has been a very difficult decision for me but has become necessary given the unjustified campaign against the appointment led by minority groups placing ideology before proper governance and what is in the best interests of the University of Newcastle and the communities it serves,” Mr Vaile said in a statement.

His comments come as the university’s council prepares to meet on Tuesday to consider its next steps for appointing another chancellor. Chancellor Paul Jeans will continue in the role until a new candidate is found.

Mr Vaile, the chairman of Whitehaven Coal since 2012, which has four mines near Gunnedah in north-west NSW, was announced as the next chancellor on June 4 and was due to take up the position on July 1. But his appointment was immediately met with a backlash over his links to the fossil fuel industry.

Within 48 hours of the announcement, professor Jennifer Martin resigned in protest from the university’s council, saying she’d been contacted by “loads” of staff opposing his appointment, including some academics whose research was funded by coal companies.

‘It represents everything a university should not be and diminishes all who are associated with it.’

“They realise in the future their current students, their PhD students and postdocs won’t have the opportunities in funding from coal, so they desperately need the university to be leading by example and moving into new industries,” Professor Martin said.

She said there was a view among staff that Mr Vaile’s appointment was not aligned with the university’s strategic plan and its ambition to be carbon neutral by 2025.

“Nor was it aligned with the desperate need we have in Newcastle to lead a post-coal transition, particularly around jobs, research funding and the development and support of new businesses,” she said.

Mr Vaile’s role was further imperilled last week when a group of 16 philanthropists and climate activists penned an open letter saying they would not financially support a university led by him.

“As significant donors we write this letter to make clear to the university that we, and many like-minded others, will not support a university who would choose as their leader someone who is determined to build new coal mines when most of the world is determined to reduce fossil fuel use,” the letter, published in the Newcastle Herald, said.

Mr Vaile said the backlash bore “all the hallmarks of the worst intolerance of the self-righteous”.

“It is based on emotion and not fact and demands conformity before understanding. It is an approach that corrodes respectful civic debate. It represents everything a university should not be and diminishes all who are associated with it,” he said.

Mr Vaile was National Party leader and deputy prime minister from 2005 to 2007.