Inside the mind of a 1950s housewife: Uncovered diary reveals what daily life was really like for a stay-at-home mom, from eating out of boredom to turning down dinner invites

An uncovered diary is revealing what life was really like for American housewives in the late 1950s, with a year’s worth of entries chronicling everything from boredom to canceled plans.

TikTok user @otherworlddesign has been sharing videos of the daily logs written by a woman named Nellie in 1957, earning herself nearly 200,000 followers on the platform in less than two weeks.

‘Found this old diary at the local thrift shop today,’ she captioned her first clip on March 13. ‘It’s from 1957. So far, it seems like a housewife! She filled it out for the whole year. And tbh, she seems like a mood.’ 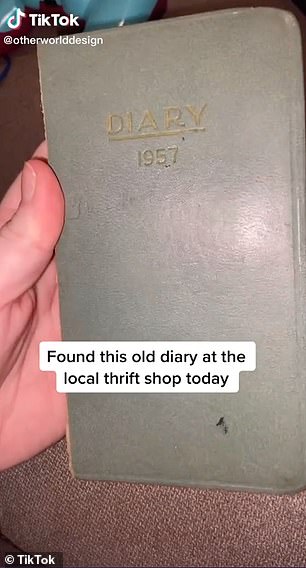 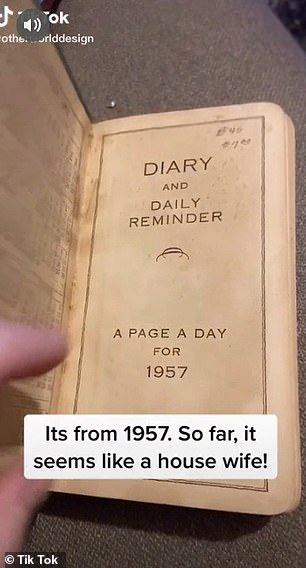 1950s housewife: TikTok user @otherworlddesign found a diary from 1957 at a thrift shop and has been sharing videos of the daily logs written by a woman named Nellie 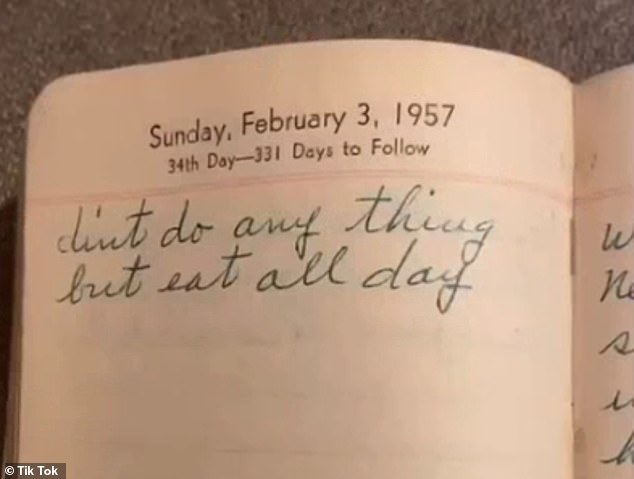 We’ve all been there! In the first post shared by @otherworlddesign, Nellie simply wrote: ‘Didn’t do any thing but eat all day’

The TikToker showed off the diary’s cover before flipping through the book and landing on a relatable entry from Sunday, February 3.

‘Didn’t do any thing but eat all day,’ Nellie wrote.

The video has been viewed more than 1.2 million times and left many TikTok fans begging for more diary entries to read.

In another log from Sunday, November, 10, Nellie jotted down a few lines about not wanting to go out, admitting: ‘Winnie called wanted me to come for dinner. I didn’t feel like going.’

The entries end up getting a bit stranger, with the diarist saying she had nothing to do on Tuesday, September 24, besides ‘catch [flies] for the lizard and ‘a little patching.’

On March 15, one TikTok user asked for the day’s entry from 64 years ago, and this daily log ended up raising some eyebrows.

‘Chief just brought me home. Heard a police call,’ Nellie wrote. ‘Kinda glad to be home for good. Such a nice family.’

Viewers had a lot of questions about why she was escorted home, with one person asking: ‘The POLICE chief brought our sweet protagonist home? From WHAT?? What did she do? I’m hooked.’

Some people wanted @otherworlddesign to post the entries in chronological order to get the full story, but she explained that Nellie’s logs are only usually a line or two and don’t ‘tell us too much.’

Winnie was mentioned in the diary multiple times, but Nellie didn’t seem to hang out with her that often based on her comments. 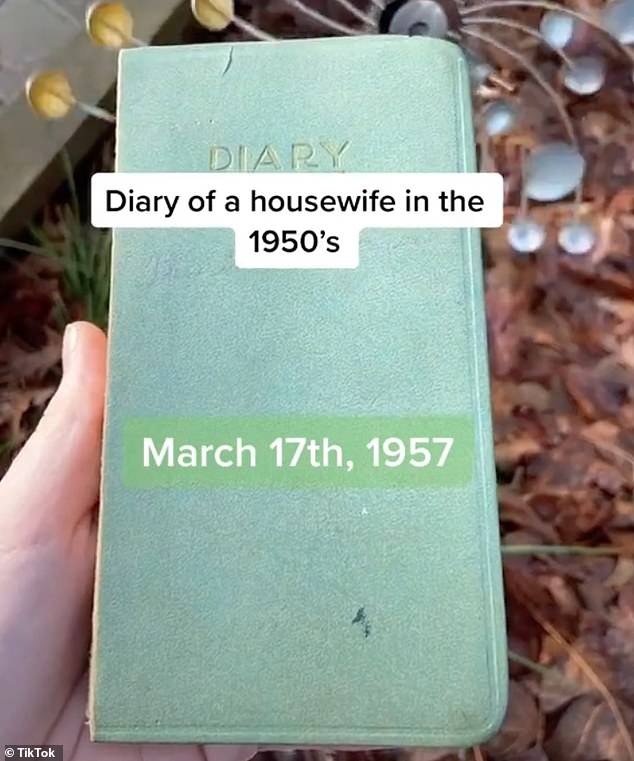 Taking requests: A number of TikTok users have asked @otherworlddesign to post certain days to see what Nellie was up to 64 years ago 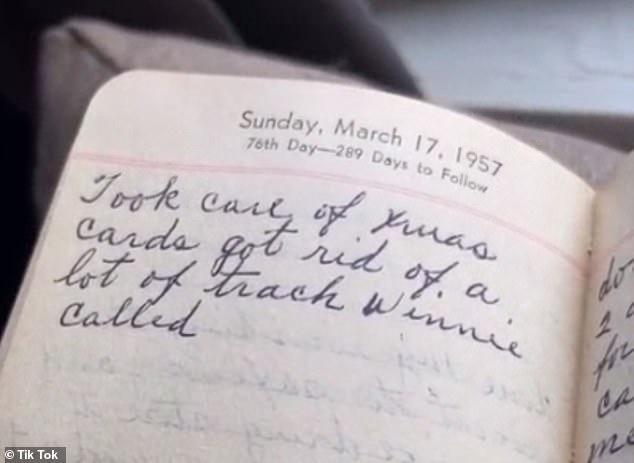 Procrastination: On Sunday, March 17, Nellie was just getting around to taking care of her Christmas cards 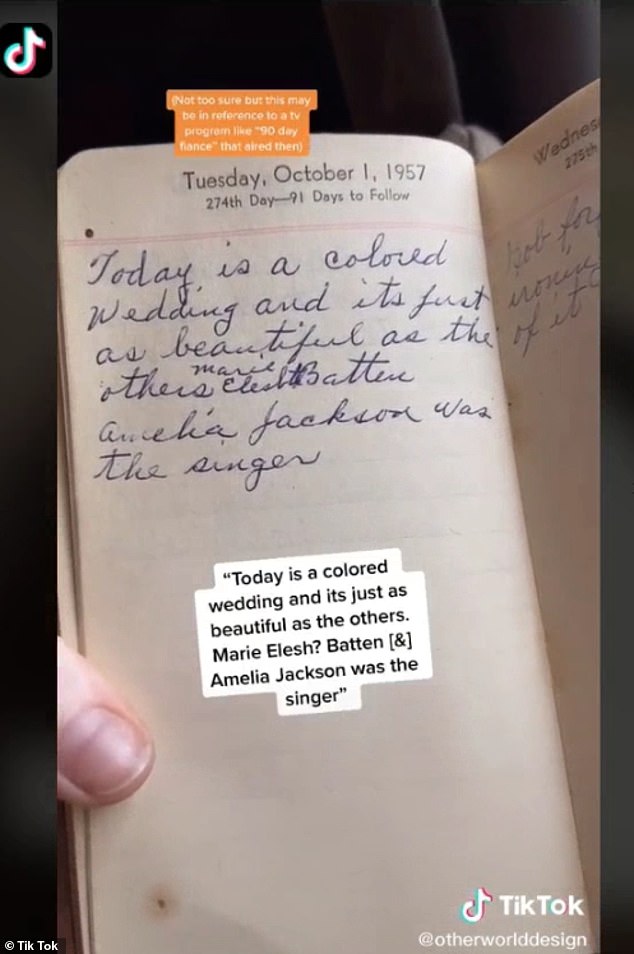 Sign of the times: On Tuesday, October 1, Nellie wrote about a black couple getting married. The TikToker believes she was referencing an early reality show that aired at the time

On Sunday, November 17, seven days after she skipped out on dinner with her, she noted: ‘Called Winnie [and] told her I couldn’t go to Okla T.G.’

Nellie appeared to be referencing TG&Y, a popular chain of variety stores in the U.S. that was headquartered in Oklahoma City.

The TikToker then jumped back to a post from Tuesday, October 1, about a black couple getting married.

‘Today is a colored wedding and it’s just as beautiful as the others,’ Nellie wrote, prompting @otherworlddesign to point out that she was on the right side of history at the start of the civil rights movement.

‘In a very different time where the nation was cruelly divided, Nellie was equal,’ she explained in the caption.

The TikTok user believes the entry was in reference to a ‘TV program like 90 Day Fiancé that aired then.’ 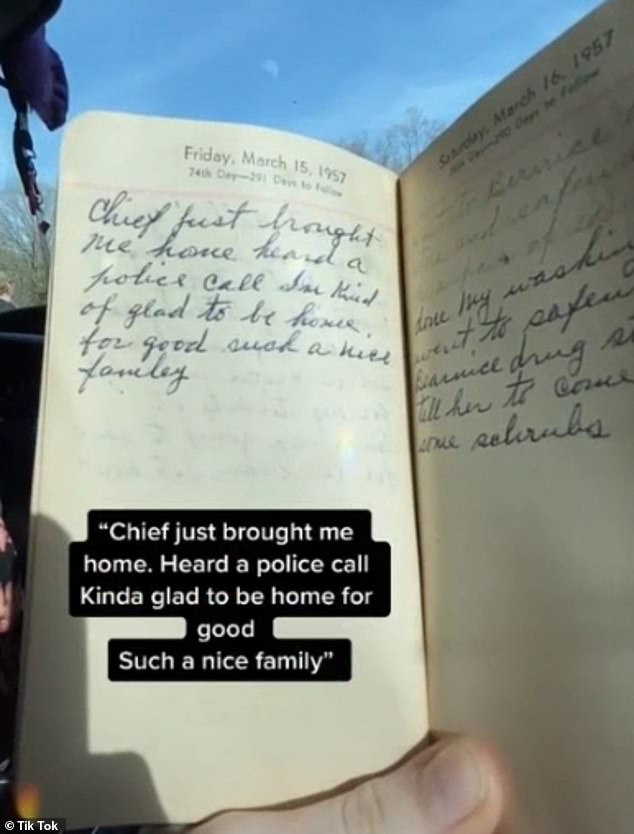 Say what? An entry about Nellie getting a ride home from a police chief raised some eyebrows 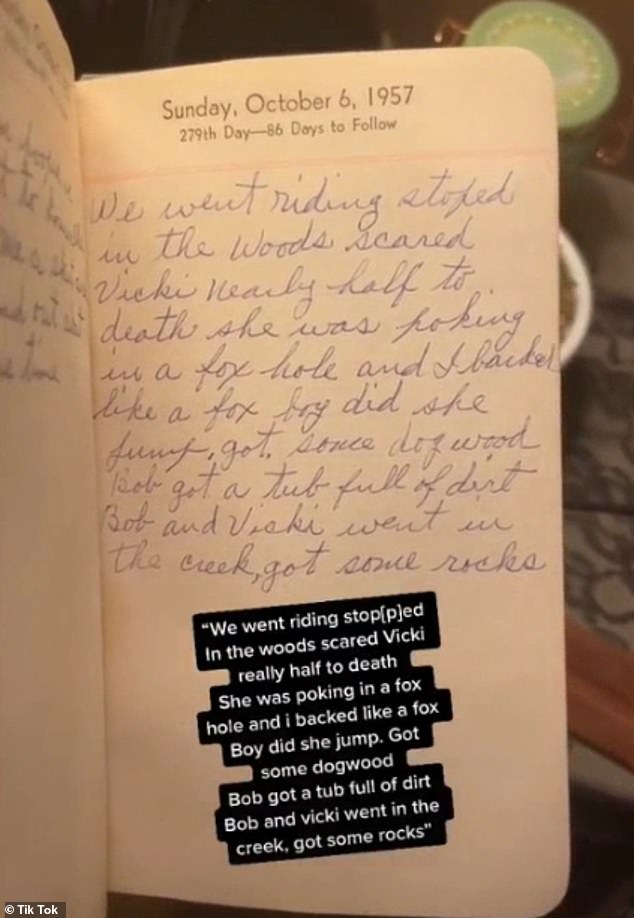 She’s a grandma! On Sunday, October 6, Nellie went riding with her granddaughter Vicki. The TikToker isn’t sure who Bob is

Bride and Groom, an early reality series that showed engaged couples getting married, aired from 1951 to 1958 and may have been what she was watching.

Shirley Robinson and Ernest Brown were the first black couple to say ‘I do’ on the show, according to an old newspaper clipping.

Fast forward to March 17, Nellie was still clearing out some leftover Christmas items in her home.

There were also a few detailed entries, including one from Sunday, October 6, which was written after she went riding with a man named Bob and her granddaughter Vicki.

‘[I] scared Vicki nearly half to death. She was poking in a fox hole and I barked like a fox. Boy did she jump,’ she explained. ‘[I] got some dogwood. Bob got a tub full of dirt. Bob and Vicki went in the creek, got some rocks.’ 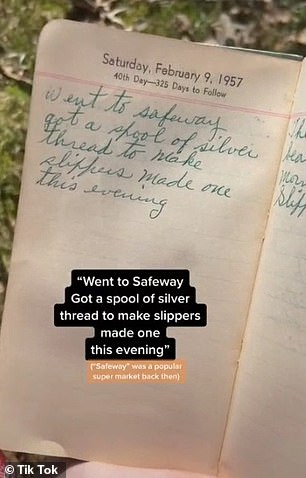 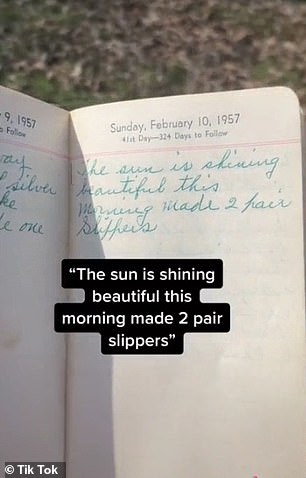 Big to-do: The diary revealed what a typical weekend was like for Nellie, who went to Safeway to get ‘a spool of silver thread to make slippers’ on Saturday, February 9 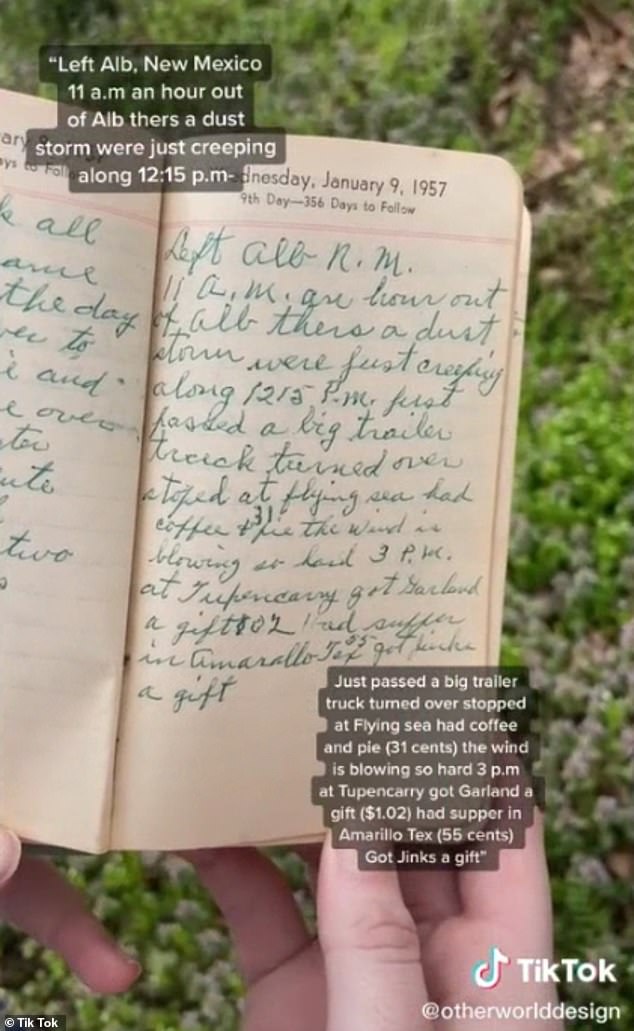 Detailed notes: Nellie seemed to live somewhere in the southwest, and in the latest entry shared by @otherworlddesign, she was leaving Albuquerque, New Mexico

The diary revealed what a typical weekend was like for Nellie, who went to Safeway to get ‘a spool of silver thread to make slippers’ on Saturday, February 9.

‘The sun is shining beautiful this morning,’ she added the next day. ‘Made 2 pair [of] slippers.’

Nellie seemed to live somewhere in the southwest, and in the latest entry shared by @otherworlddesign, she was leaving Albuquerque, New Mexico. She took notes throughout the drive on Wednesday, January 9.

‘Can you guys help me find out what a Tupencarry and Flying Sea are?’ the TikToker asked, adding that ‘Garland is her son’ and ‘Jinks is unknown.’