A genius toddler has been caught on camera doing algebra, fractions and reciting multiple digits of pi.

Three-year-old Aiden Blasian, from Washington, D.C., can easily add together numbers of more than 10 digits, and regularly plays around with algebraic equations.

The adorable boy spends hours at his chalkboard every day, learning increasingly harder math operations with the help of mother Cynthia Adinig, 34. 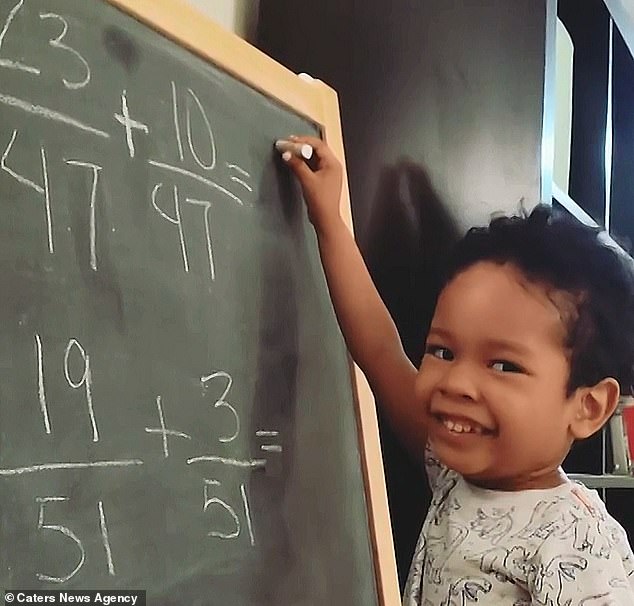 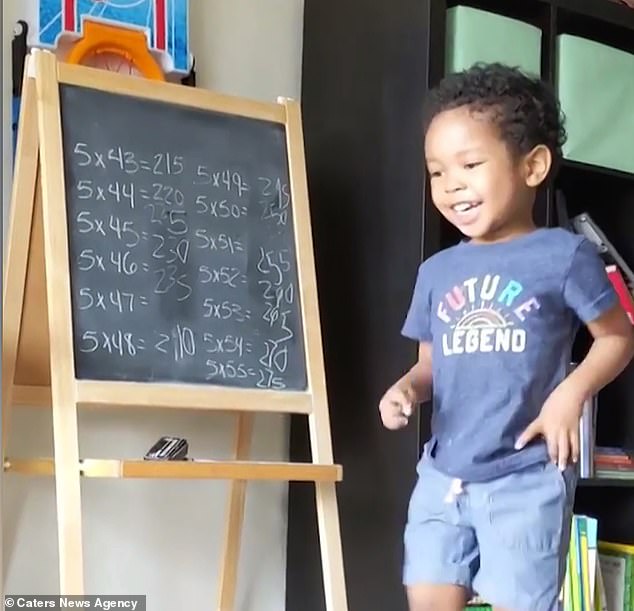 Practice makes genius! The toddler works at his blackboard every morning and every evening, focusing on his math skills with the help of his mother Cynthia Adinig, 34 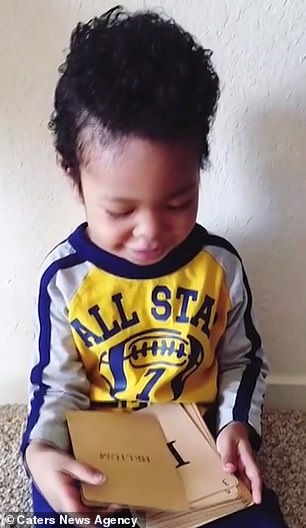 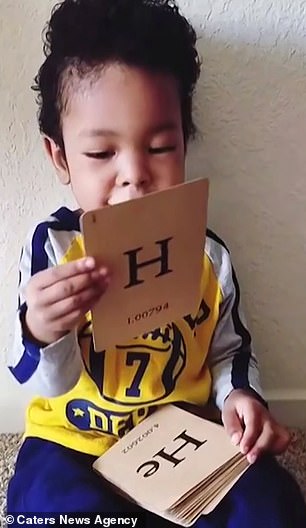 Multi-talented: As well as math, Aiden also enjoys science, and has already memorized multiple elements from the periodic table, using flash cards to practice them all

Cynthia says Aiden’s interest in math and science started in a spontaneous way briefly after he learned to write at the tender age of two.

The graphic designer said: ‘In my family we like math and sometimes we do math problems together.

‘One day my dad sent me a problem, Aiden saw the notes and started solving it.

‘We started giving him problem after problem and he was answering everything correctly.

‘We expect him to be at a fourth grade level by the time he starts school.’

Traditionally, children start school at the age of five, when they enter kindergarten, however by that point, Cynthia believes her child will be on the same level as a ten- or eleven-year-old.

Video clips shared by Cynthia on Aiden’s Instagram page show the impressive toddler standing in front of a small easel blackboard writing out the answers to different equations, as his mom coaches him through each problem.

But while his mother certainly lends an encouraging hand, it’s clear that the bulk of the work is being done by young Aiden himself, who is able to do huge multiplication sums in his head within mere seconds.

In another clip, Aiden is seen perched on the ground while reciting the first 15 digits of pi from memory.

And it’s not just math that captivates the child genius – he is also fascinated with science.

The youngster uses flash cards to memorize different elements from the periodic table, flipping through each one and reciting the full name of each element upon seeing its corresponding symbol.

Other videos show him doing different science experiments at home with his mother, including filling a balloon by mixing vinegar and baking soda to create ‘an acid base reaction’, as he tells the camera. 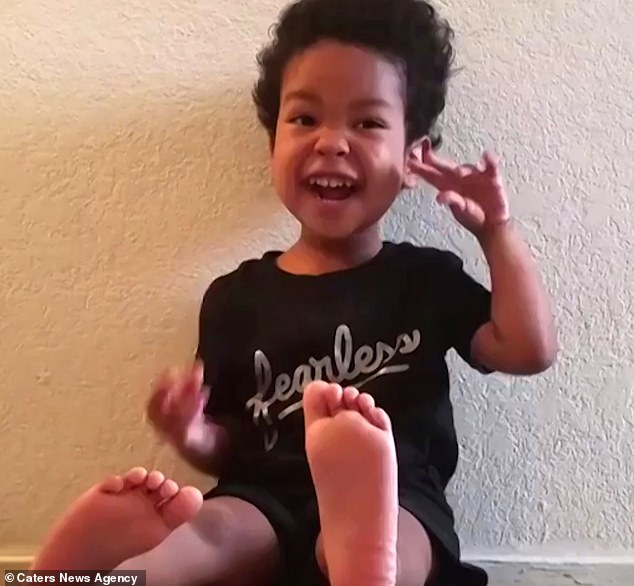 Joker: Aiden ‘immediately gets hooked’ to whatever new subject he tries, according to his mother, who will then do her best to study up so she can help him 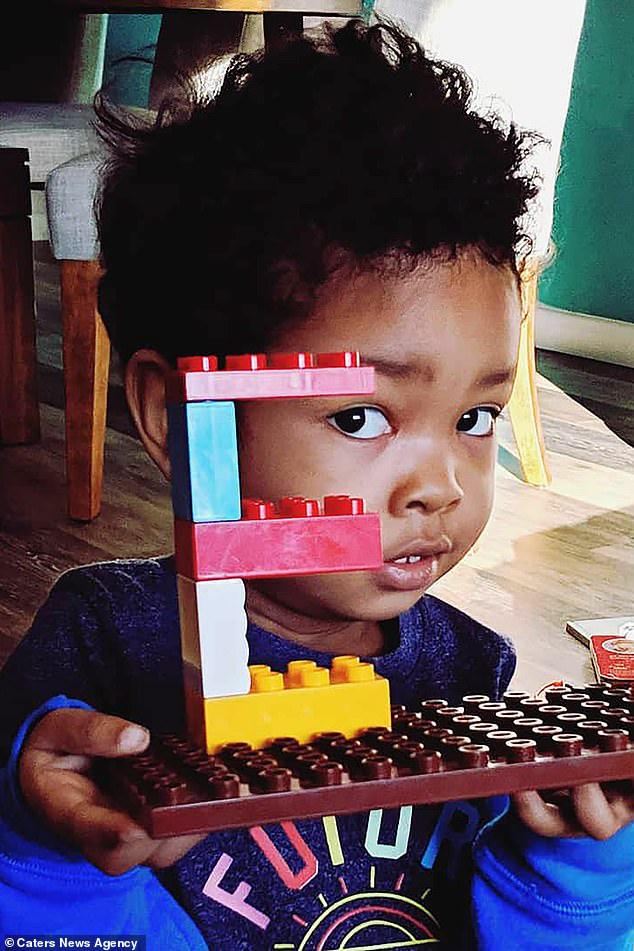 Tradition: ‘In my family we like math and sometimes we do math problems together,’ Cynthia explained of her son’s interest in the subject 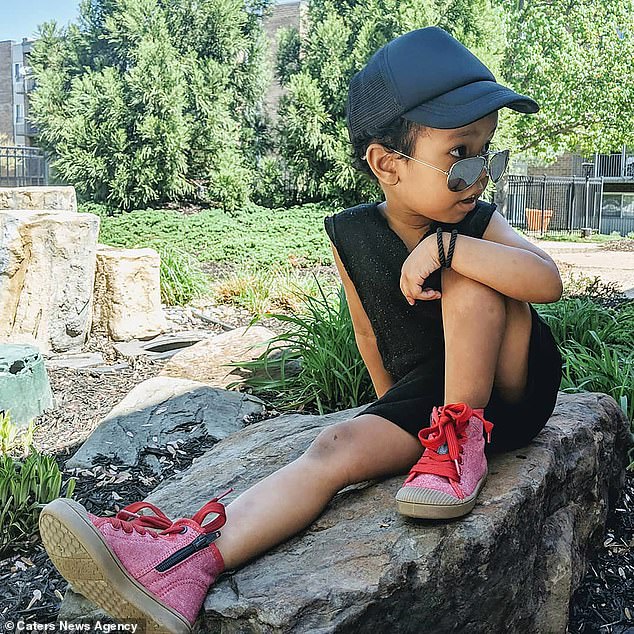 Advanced: By the time Aiden starts school, likely at the age of five, his mother believes he will be on the same level as a fourth grader

Aiden also loves to play chess against his mother, and the two regularly enjoy games against one another, with the toddler showing off an impressive grasp of the game, both in terms of the basic rules and the tactics that are put into play by far more experienced players.

But Cynthia says, her son’s main passion currently is math.

According to his mom, Aiden, who is Filipino and African American, never misses a day of practicing his numbers, and he likes to stand up at his blackboard and start working on them first thing in the morning and before going to bed.

She said: ‘At the moment Aiden is learning more algebra and to add increasingly bigger numbers.

‘He also decided he would learn the periodic table, so I had to learn it too.

‘Whenever he gets into a new subject he immediately gets really hooked.’