Growing up, I felt my life existed in two halves, that there were two distinct individuals living inside my body, two distinct cultures. Some days I could see them, even feel them. I saw them fight. Felt them collide.

Watching from afar, I shaped them, gave them form and even named them. I imagined Akosua’s short dark hair and Mary’s angular face. The girls had their own lives, own childhoods, but somehow shared the same body, my body. It was easier that way, to split my life in two. 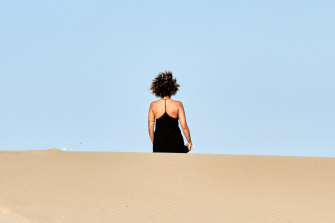 They don’t fight quite so often now. Most days they blend so seamlessly, their thoughts overlap. I have begun to forget the cracks that used to loom so large.Credit:Stocksy

Akosua was an angry child. My mum always said I had a tiger inside me, which would appear without warning, and I never did have the heart to tell her I had given that tiger a name. Akosua means “born on a Sunday”, a name one in seven girls in Ghana share. It is associated with the sun and thus with fire. A firecracker, that’s what my teachers called me.

Mary, on the other hand, was contemplative, thoughtful. She shared her name with every second-born in my mum’s family. Was always doing her best to fit in. She had this innate ability to mimic, to adjust. In the evenings, she’d arrange her impressive collection of multicoloured beanie bears on the end of her bed. She would imagine them as friends, disciples even, a whole kingdom to rule over. Mary was always good at imaginary games; they were the only places she was able to make the rules.

Akosua’s home smelled of peanut soup and chilli. There were kente cloth curtains and wooden masks on every spare bit of wall. On the weekends, at Ghanaian events with her family, Akosua would come alive. She made friends easily, tried to learn the dances and eat the spicy food despite Mary’s complaints. She learnt to say “hello”, “goodbye”, “how are you?“, “I’m good” and “God bless you” in Twi. It was Mary who learnt to say, “I’m sorry, I only speak English.”

In the summers, Mary and her family went to the NSW South Coast, always to the same house. One afternoon, at the local shopping centre, her mum left her with the trolley as she popped into the bakery. A woman, dripping in beige with pearls around her neck, approached Akosua. She began to question her, demanding to know where she was from, where had she got the piles of food in the cart. Mary tried to explain that she and her family were there on holiday from Sydney. Her mum came to collect her, a package of soft white rolls under her arm.

Are you sure she’s yours? Her mum scoffed and pulled her away, explaining, frustrated, exhausted, that some people are just ignorant. In the back of the car, Mary inspected herself in the rear-view mirror. She looked identical to her mum, didn’t she? Same chin, same big eyes. But she had forgotten that Akosua controlled the tone of her skin and wide, flat nose.

In class, Akosua gets into an argument with a boy. A cute boy, a boy Mary has a crush on. He is explaining about people in other countries, poor countries, people in Africa. They don’t care as much about their dead, it happens so much over there, he says. They just throw away their dead and get on with their lives. Akosua is yelling. She is talking about the funerals she has been to, the night-long celebrations of life. The ceremonies that last weeks in Ghana, about her dad letting her practise tying his thick red-and-black funeral cloth. Later, as they are walking home, the boy laughs, “You get so angry in arguments.”

A few weeks later, Mary has agreed to go to the year 10 formal with him. She has told him to buy a pink and white corsage to match her dress. Chemicals on chemicals burn her scalp, straightening Mary’s hair. There is a symphony of sound in the salon, a loud Afrobeats CD and the fast-paced unrelenting chatter of the hairdressers as they work. Akosua attempts to translate a sentence, even a single word. One of the women notices her inquisitive eyes and smiles.

When her father appears to collect her, the woman chides him. How could you not teach her the language? He just sighs. It’s the same story Akosua has heard a thousand times, excuses spouted to camouflage his fears: why would she need it in Australia? Akosua wants to pipe up, explain the importance of culture, of talking and communicating with people like herself, but Mary is too busy admiring her new hair in the mirror.

Akosua decides she wants to write stories. Stories about people who look like her. About what it’s like to feel out of place. She sets to work reading Maya Angelou, Alice Walker, Toni Morrison, but is confused when these women’s stories don’t sound like hers. She writes a story and hands it to a teacher she admires. She watches him carefully as he reads the words, leaning back in his chair, crossing his arms.

He shakes his head. “You’re going to have to pick a new topic if you want to get good marks.” He says there are no more black stories to tell. “I mean, all this suffering is a bit overplayed, isn’t it?” He laughs.

When Akosua leaves the room that afternoon, it is Mary who asks her friend to tell the teacher she is sick. Because Akosua couldn’t say a man she admired had broken her heart that day, couldn’t say she felt betrayed. Mary later hands in a story about a robot uprising and tops the class – much more accessible.

Mary sits alone in another room full of white students watching a video. She is doing a better job of blending in now. She has learnt to mimic their behaviour. If she speaks in slang and does her make-up just right, then maybe, just maybe, they won’t see Akosua there beneath her skin. They are watching a documentary, Race and Intelligence: Science’s Last Taboo. It discusses the science of why black people are less intelligent.

Later, when Akosua goes to speak to the teacher, she’s told it’s just the syllabus, they know it’s a bit old-fashioned but what can you do. She cries herself to sleep that night. I’m not sure if it’s Mary or Akosua now. They’re starting to blend into one, the edges of their worlds blurring beyond my control.

At first they fight it. Mary seeks out white spaces, white hobbies, white men. A sense of safety, a sense of security. She tries to convince the world she belongs. She learns violin, goes to folk concerts, travels to England to visit family.

She begins to talk like her mum, rounding her vowels. Akosua lets her rage fuel her. She argues with her dad about not knowing the language, not knowing the culture. She starts a Twi language course online, cuts off her hair and throws out half her wardrobe – she can no longer even look at stripes.

At night I hear them, fighting in my head, whispering away. Akosua’s words are not her own, she’s learnt them. Heard them yelled from car windows, spat across playgrounds and from the lips of those she loved, those she admired. This is not your country. This is not your home. You are not from here.

They feel it, each other’s pain and dread, and seek solace and protection in each other’s arms. They discover that to fight they must lean on each other, learn to get along. Or at least to co-exist.

But the battle inside is nothing to what rages beyond. Nothing to the strangers, passers-by or even friends who tear at their skin. And as Mary bleeds, it is Akosua who ties the bandage. As Akosua cowers in fear, it is Mary who extends her hand. They feel it, each other’s pain and dread, and seek solace and protection in each other’s arms. They discover that to fight they must lean on each other, learn to get along. Or at least to co-exist.

The weekend before they leave home, they lie on the beach under the Australian sun with their family and cannot help but smile as their melanin glows. They leave the familiarity of their town of one black family and move to a city where they learn to be one of many. They take with them one African mask and one orchid from their mum’s greenhouse. The first night in their new home they watch Jane Austen and eat jollof rice.

They don’t fight quite so often now. Most days they blend so seamlessly, their thoughts overlap. I have begun to forget the cracks that used to loom so large. Black, white. Mixed-raced, biracial. British, Ghanaian, Australian. From Mpraeso, from Berkshire. Coloniser, colonised.

Now, when I visit my parents in my childhood home, I see the memories of the two little girls who used to live there. They watch me still, out of mirrors and reflections in windowpanes. But now they’re smiling. As I explore my new world, I walk between those girls, Mary on my left, Akosua on my right. I feel safe there, I am the product of their two halves. Between them, I am whole. Between them, I belong.

Edited extract from Roots: Home Is Who We Are (Hardie Grant Books), an anthology of voices from the SBS Emerging Writers’ Competition, available now.

This article appears in Sunday Life magazine within the Sun-Herald and the Sunday Age on sale August 22. To read more from Sunday Life, visit The Sydney Morning Herald and The Age.

The Booklist is a weekly newsletter for book lovers from books editor Jason Steger. Get it delivered every Friday.