The very last thing we need is a Covid public inquiry, warns DAN HODGES amid fears Dominic Cummings will tell all to the Health Select Committee over the coronavirus ‘disaster’

It was the tweet that sent a tremor through No 10. ‘Don’t understand why the House of Commons has been so slow to try to understand what and why things went so catastrophically wrong, but agreed today I’ll give evidence,’ announced the message from @Dominic2306.

Downing Street had been breathing easy after the Prime Minister’s most influential former adviser Dom Cummings put in a relatively restrained appearance before the Commons Science Select Committee last week.

But now their very own evil genius was threatening to return in May, and tell all to the Health Select Committee about what he termed the Covid ‘disaster’. 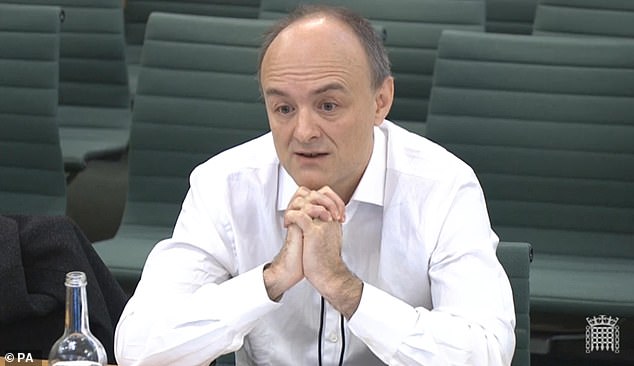 It was the tweet that sent a tremor through No 10. ‘Don’t understand why the House of Commons has been so slow to try to understand what and why things went so catastrophically wrong, but agreed today I’ll give evidence,’ announced the message from @Dominic2306

A Minister who remains close to Cummings predicts: ‘I don’t think he’s got any axes to grind. I suspect he’s just planning to tell the truth.’

But others take a very different view. They believe Cummings is preparing to jump aboard the bandwagon of those putting their personal gloss on the Covid crisis, using it to settle political scores, or seizing the lofty vantage point of hindsight to redefine the history of the pandemic.

‘Why do people still buy into this cult of Cummings?’ asks another Minister.

‘Remember, this is the guy who literally changed his blog to pretend he’d seen the pandemic coming. He was telling journalists the Government’s strategy was herd immunity, when it wasn’t. He didn’t start turning up to the key meetings until Boris did. It drives me insane. He’s just trying to put his own spin on things.’

Maybe. But so is everyone else. Last week Labour demanded a full-blown Covid public inquiry.

After meeting the families of some of those who died, Shadow Cabinet Minister Rachel Reeves declared: ‘Justice is being denied, and they can’t have closure until they better understand what happened. They should be in the driving seat for how this is conducted, but it needs to be independent, it needs to be held in public.’ 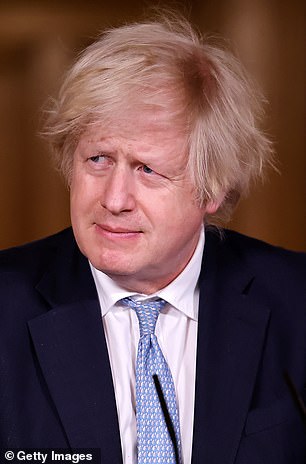 The idea that as the crisis engulfed them Boris and his team were thinking, ‘Whose pockets can we fill?’ is a paranoid conspiracy. But as the immediacy of that time dissipates, it will become an increasingly fashionable one

Let’s get this straight: apparently we need a full, open inquiry. But Labour have already decided a terrible crime has been committed, and many victims are being wronged. It must be independent. But it should be driven by the relatives of the deceased.

Again, Reeves is not alone in her blinkered search for Covid truth. Many already have their version of pandemic history typed and bound. And no inquiry will alter it.

Take, for example, the favoured narrative that Boris failed to lock down at the start of the pandemic, costing tens of thousands of lives.

Even the most cursory perusal of the Sage committee minutes shows this to be false. It was the scientific experts who drove the initial strategy, not Ministers. And those experts advised caution and delay.

February 27: ‘On the risk posed by national and international travel… Sage advised that the additional numbers travelling are not significant.’

March 3: ‘There is currently no evidence that cancelling large events would be effective.’

March 13: ‘The UK remains on broadly the same epidemic trajectory and time to peak… Sage was unanimous that measures seeking to completely suppress spread of Covid-19 will cause a second peak.’

March 16: ‘On the basis of accumulating data, including on NHS critical care capacity, the advice from Sage has changed regarding the speed of implementation of additional interventions.’ But blaming scientists isn’t the story many people want to tell. Not least the scientists themselves.

One of the loudest voices demanding an inquiry has been that of Sage expert John Edmunds.

‘An event of this magnitude needs to be looked at in detail, including – if necessary – compelling witnesses to attend,’ he insisted on Tuesday.

Fine. But if he’s asked to appear himself, which John Edmunds will turn up? The one who told the nation on March 3 last year that Covid mitigation measures were ‘not for now. It’s for coming weeks or months’?

The one who later claimed it would have made ‘a big difference’ if the UK had entered lockdown earlier but ‘we simply didn’t have the data at the time’? Or the one who admitted he didn’t even begin modelling a full lockdown until the middle of March? 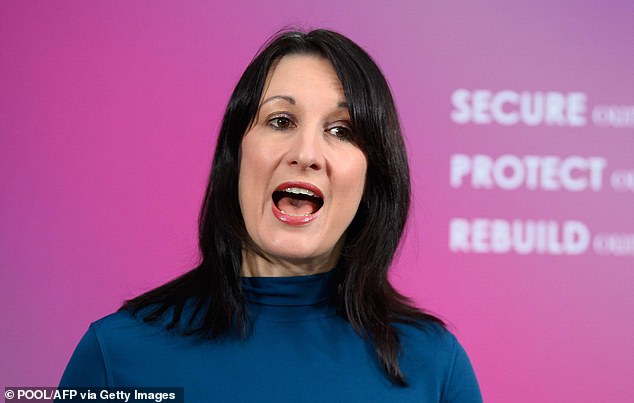 After meeting the families of some of those who died, Shadow Cabinet Minister Rachel Reeves declared: ‘Justice is being denied, and they can’t have closure until they better understand what happened. They should be in the driving seat for how this is conducted, but it needs to be independent, it needs to be held in public’

Advocates for an inquiry claim this is precisely why one is required. So the inconsistencies of key participants can be interrogated. But they won’t be.

Not just because this has already become a political process. But because as time moves on, we are not gaining perspective, but losing it.

Look at another major area of contention, PPE. As one Minister involved in pandemic planning told me: ‘It was a shambles at the procurement end. We were being told we had to tick all these boxes, and the process would take a couple of months. I was basically shouting, ‘People are dying! Just send someone over to China and get it!’ ‘

But that’s not what people are shouting today. Now the criticism is of billions squandered, cronies rewarded.

The idea that as the crisis engulfed them Boris and his team were thinking, ‘Whose pockets can we fill?’ is a paranoid conspiracy. But as the immediacy of that time dissipates, it will become an increasingly fashionable one.

Which isn’t to say the Government has no case to answer. Bad mistakes were made. But again, time will only distort, not clarify, the reality of how and why.

Another Cabinet Minister tells me he believes Cummings is going to inflict significant damage on the Government. But he will do so because he’s going to attack on a different front from the other critics.

‘The real failing was over the summer, and the build-up to the second and third waves,’ the Minister explained.

‘By that point we had a handle on it all. The scientists were clear. But we bowed to political pressure from the right of the party and sections of the press. Yes, we had to have an eye to the economy. But we would have done much better to lock down early, and reopen gradually in the spring.’

But this analysis once again ignores the realities of the moment. Scientists who became summer lockdown hawks were the same scientists who had warned extended national incarceration would play havoc with support for their Covid strategy. It overlooks the belated impact of the Kent strain and, crucially, it ignores the vaccine.

Any Minister advocating a return to lockdown in advance of its discovery would have effectively been calling for a vicious never-ending cycle of national shutdown, brief reopening, then further shutdown.

At which point the stoicism of the British people would have been stretched to breaking point.

People don’t need a learned judge to tell them about the Covid crisis – they lived it.

Most have formed the view those mistakes that occurred were made in exceptional circumstances, and good conscience. They do not blame Boris and his Ministers. And their sole focus is on unlocking and moving forward.

Of course there will be others who take a different view. And no inquiry is going to change their minds either. So why not save ourselves a lot of time and trouble.

Let Dom settle his scores. Let anyone who wants to lambast the Government for its failings. And allow the rest of us to leave history to the history books, and get back to living our lives.