Virgin cabin crew member reveals the two seats frequent flyers ALWAYS choose on their planes – and believe it or not, one of them is in economy!

A Virgin Australia flight attendant has revealed where the best seats on their standard planes are – and best way to ensure you secure one of them on your next trip.

But while 2A is a business-class seat, but the second, 19F, is in economy.

’19F is so popular because it’s in the middle of the aircraft, which generally means there’s more luggage space available,’ she told news.com.au.

‘You don’t have to rush on-board first, you can wait until the line’s a little smaller, enjoy your coffee and avoid that hectic rush.’ 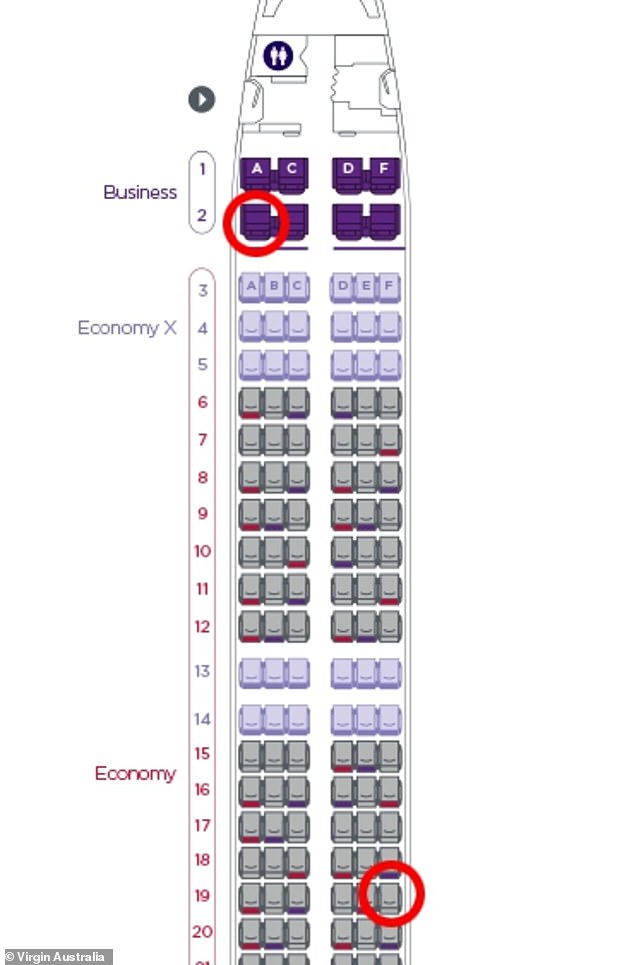 Ms Ferguson said seat 19F is popular on their Boeing 737-800 aircraft because it’s a window seat, about halfway in the cabin, on the right-hand side

How can you get rid of jet lag?

Start adjusting to the new time zone before leaving home. Wake up earlier if you’re flying east or later if flying west.

Stock up on super foods

Lemons help to fight off dehydration and cherries reset the body clock.

Get your ‘anchor’ sleep

Passengers should get a minimum of four hours of sleep during the local night.

Ms Ferguson said seat 19F is popular because it’s a window seat, about halfway in the cabin and it’s on the right-hand side.

‘A hot tip: If you’re flying into Sydney, the right-hand side of the aircraft generally has the best views of the city so you can get that all-important Insta pic,’ she said.

Across all Virgin aircrafts 2A is a business class seat, which means it offers priority boarding, more baggage allowance and space and a menu created by chef Luke Mangan

It also offers more privacy than the row in front and has ‘fantastic’ views because it isn’t seated over a wing.

Ms Ferguson also shared her tips to ensue you’re able to nab the best seats on any flight.

Her main recommendation is to check in online and book the seat in an advance. If you’re unable to book either of the two best ones then you want one in the overwing exit.

‘If you forget, remember to opt for a seat in the middle of the aircraft as it generally has more luggage space available,’ she said.

Ms Ferguson’s favourite seat when travelling domestically in Australia is the overwing exit window seat because it offers extra leg room and is available by booking Economy X.

1. Kathmandu Packing Cubes – ‘I’ve had the same set of Kathmandu packing cubes for 5+ years and take them everywhere with me.’

2. Bang & Olufsen Play Headphones – ‘My boyfriend gave me these headphones for my birthday and I take them on every flight.’