There are 156 suburbs in Sydney and 15 in Melbourne where every house sold this year has changed hands for more than $1 million as first-home buyers start to retreat from the hot property markets. 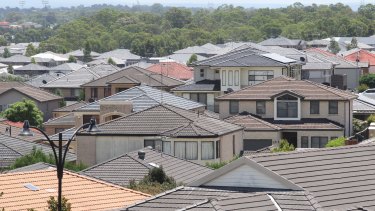 Far flung suburbs have joined the list of suburbs where every house sells for more than $1 million.Credit:Natalie Roberts

The report looked at suburbs with more than five house sales between January and May, meaning there may be tightly held areas where all the homes are worth above $1 million but they are not transacted frequently enough to make this list.

In Sydney, there were 32 suburbs in the upper north shore, 30 in the city and east, 24 in the northern beaches, 23 in the lower north shore and 22 in the inner west where every home sold for more than seven figures. There was one suburb – Ashbury – in Canterbury Bankstown, two each in the west and the south-west, and three on the Central Coast with all million-dollar-plus sales. The analysis does not include apartments.

The list of Sydney suburbs includes the typically desirable neighbourhoods of Point Piper, Glebe, Bellevue Hill, Bondi and Double Bay. But it also includes Beaumont Hills, about 40 kilometres north -west of the Sydney CBD, and two suburbs 70 kilometres from the city centre in the Camden area — Kirkham and Grasmere.

In Melbourne there were five suburbs in each of the inner city and the Mornington Peninsula where house sales exceeded the $1 million benchmark, two in the outer east and one each in the inner-east, north-east and west. These include Portsea, Cremorne, Kangaroo Ground and Merricks Beach.

Dr Powell said the market had been red-hot this year and the million-dollar median in Sydney had been a feature of the nation’s most expensive property market for some time. Melbourne’s prices had also been tracking higher.

“Lower-priced areas were leading the pack last year [for price growth] but now it’s the upper part of the market growing the fastest,” she said.

She said there were some signs the peak may have been reached. On a measure introduced by Domain during the pandemic which tracks changes to asking prices during auction campaigns, there are now fewer upward revisions in price than in the first few months of the year.

Independent economist Nicki Hutley said people were attracted to suburbs, usually close to city centres, with many amenities and high quality infrastructure. Governments have sought to boost infrastructure to suburbs further out, but she said this had just helped to push up prices of those areas as well.

“Ballarat or Bendigo, Wollongong and Newcastle, they’ve grown slower than they should have. Better infrastructure for them may actually take some price pressures off,” she said.

“Mortgage rates, however, have fallen by over 1 per cent and incomes have increased by over 6 per cent … which buyers have taken advantage of,” he said.

He said the affordability ceiling would start to have an effect on prices eventually, as interest rates are not going any lower and wage growth is relatively subdued.

“First home buyers … will predictably be the first to retreat,” he said. “The joker in the pack however are investors who are clearly and predictably rising as banks now find renewed interest in this segment.”

The ABS data also shows new housing loan commitments increased 3.7 per cent over April, while lending to investors increased 2.1 per cent and other home buyers jumped 4.3 per cent.