The Queen and Prince Charles have honoured the RAF pilots who fought in the Battle of Britain in moving Instagram posts to mark the 80th anniversary of the WWII showdown.

Members of the Royal Family paid tribute to the day on the official Royal Family Instagram account by sharing archive pictures taken on the battlefield, as well as posting photographs pictures of the Queen, 93, The Duke of Kent, 84, the Prince of Wales, 71 and the Duke of Cambridge, 38, with veterans throughout the years.

Prince Charles’ official Instagram account Clarence House also shared several archive pictures of the event, alongside pictures from previous commemorative efforts attended by the Prince of Wales and the Duchess of Cornwall.

While it is remembered each year on September 15, the Battle of Britain took place from 10 July to 31 October 1940 and saw the Royal Air Force fight off the raids from Hitler’s Nazi Luftwaffe.

The Nazi leader wanted to force Great Britain into submission with multiple air raids but 15 September 1940 saw the confrontation take a decisive turn in favour of the British forces, after 60 German aircrafts were shot down during two large attacks. 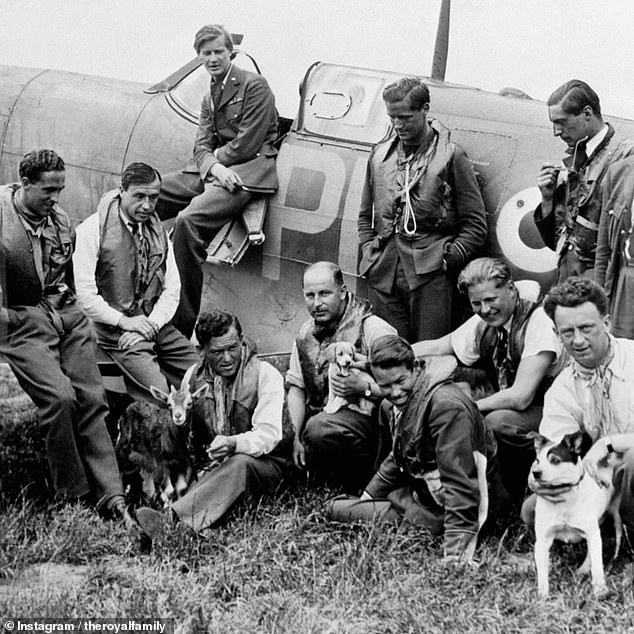 The royal family have honoured the RAF pilots who fought in the Battle of Britain in an Instagram post to mark the 80th anniversary of the WWII showdown (Pictured: RAF pilots of the Advanced Air Striking Force beside a Spitfire aircraft with their mascots) 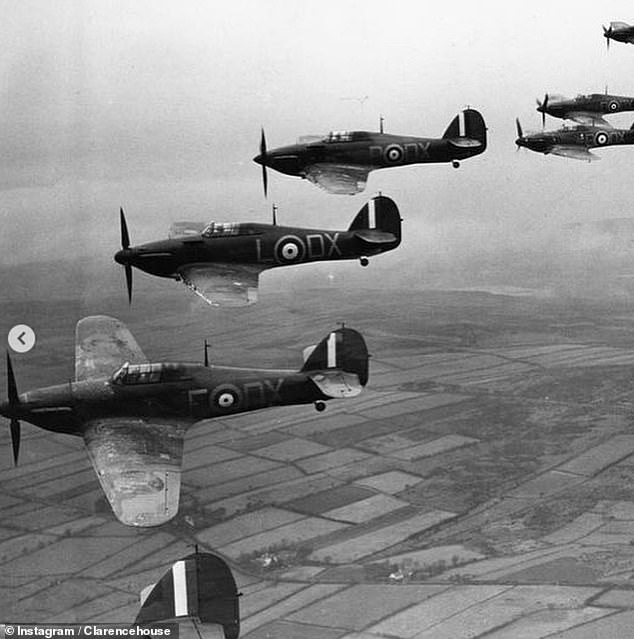 In a heartfelt homage to the fighters, the royal family quoted the words of the late Prime Minister Winston Churchill, who once said of the Battle: ‘Never has so much been owed by so many to so few.’

Sharing the post, they wrote: ‘Today is Battle of Britain Day. The decisive Second World War battle took place in the skies of southern England 80 years ago, between July and October 1940.

‘Ultimately, the Luftwaffe was defeated and Germany was unable to carry out its planned invasion of Great Britain.

‘While most of the pilots whom Winston Churchill referred to as ‘The Few’ were British, Fighter Command was an international force made up of men from across the Commonwealth and occupied Europe.’ 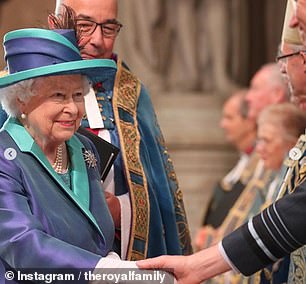 Photographs on the Queen, 94, and Prince William, 38, meeting veterans over the years were shared by the Royal Family account 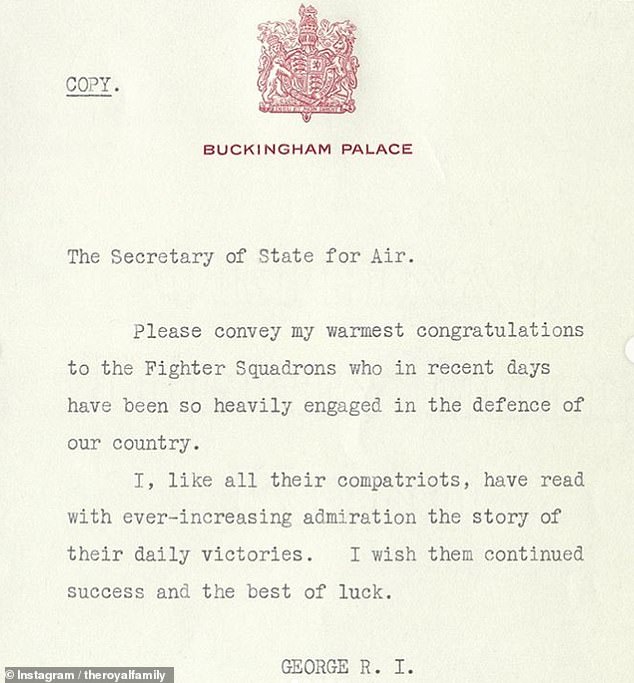 Alongside the caption, they shared lovely pictures of veterans with the Queen on the 100th anniversary of the RAF in 2018.

The Queen is Patron of the RAF Benevolent Fund, which provides support for veterans.

Meanwhile another photograph was shared of the Duke of Kent, who is the fund’s President. attending a reception for the centenary in 2018 as well.

A third image showed the Duke of Cambridge talking to veterans during Battle of Britain Memorial Flight’s 60th anniversary in 2017. 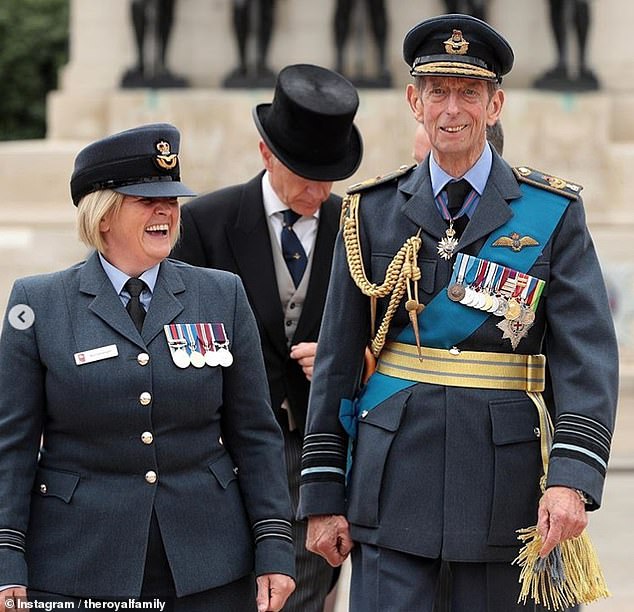 A photograph of the Duke of Kent, who is the President of the RAF Benevolent Fund, was also shared by the account (pictured attending a reception in honour of the 100th anniversary of the RAF in 2018) 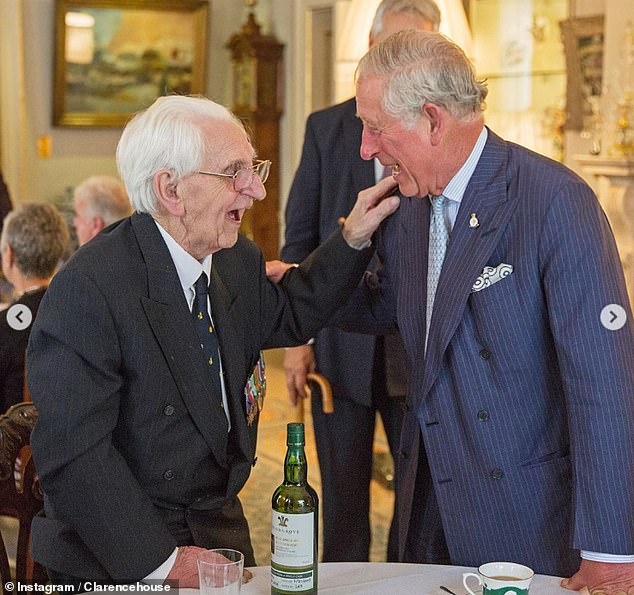 The Prince of Wales also paid tribute to veterans online in a post to mark the day (pictured,  enjoying a laugh with one of the RAF veterans during a reception for the  Battle of Britain Fighter Association Service of Thanksgiving and Rededication)

Another photograph shared a glimpse at King George VI’s message to Fighter Command, conveying his congratulation and admiration for the fighters involved in the Battle.

The Prince of Wales, who is the Patron of the Battle of Britain Fighter Association, shared his own homage on the Clarence House Instagram account.

‘On this day in September 1940, the Battle of Britain reached its climax, as the Royal Air Force shot down a substantial number of invading German aircraft. The action on this day was seen as an overwhelming and decisive defeat for the Luftwaffe. 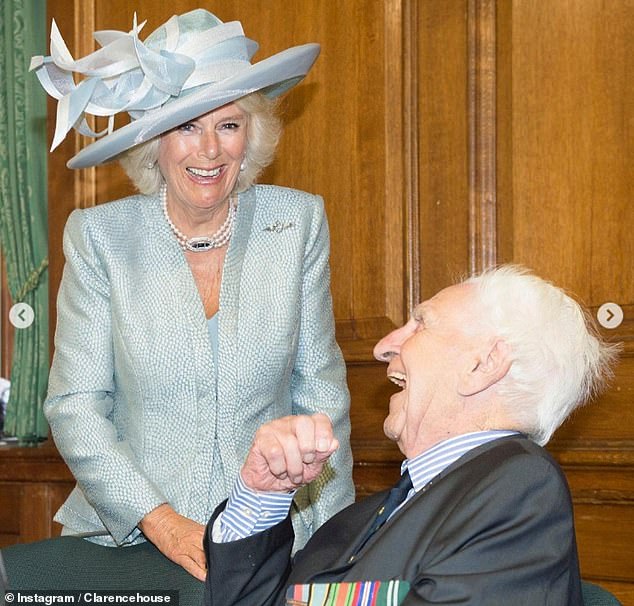 The Duchess of Cornwall enjoying a pleasant conversation with a veteran at a reception for the Battle of Britain Fighter Association Service of Thanksgiving and Rededication at Westminster Abbey, London

His post went on: ‘As commemoration for the 80th anniversary of the Battle have been postponed this year, take a look back at previous events The Prince and The Duchess have attended to mark the Battle of Britain.’

2,936 pilots fought for the British side during the Battle of Britain, which included 595 non-British pilots hailing from Canada, New Zealand, Poland, Ireland, Australia, Czechoslovakia, France, Belgium, Jamaica, South Africa, the US, Newfoundland and Barbados, as well as Southern Rhodesia.

1,452 aircrew perished for Britain during the showdown with the Luftwaffe, 422 were wounded and 1,744 aircraft were destroyed.

The Battle of Britain: Hitler’s failed attempt to crush the RAF

In the summer of 1940, as the Nazi war machine marched its way across Europe and set its sights on Britain, the RAF braced for the worst.

Young men, in their late teens or early twenties, were trained to fly Spitfires and Hurricanes for the coming Battle for Britain, with others flying Blenheims, Beaufighters and Defiants, becoming the ‘aces’ who would secure the country’s freedom from Hitler’s grasp.

But Britain’s defiance came at a cost. From an estimated crew of 3,000 pilots, roughly half survived the four-month battle, with 544 Fighter Command pilots and crew among the dead, more than 700 from Bomber Command and almost 300 from Coastal Command falling to secure Britain’s skies.

The losses were heavy, but the Germans, who thought they could eradicate the RAF in a matter of weeks, lost more.

2,500 Luftwaffe aircrew were killed in the battle, forcing German Air Command to reconsider how easily Britain would fall to an invading Nazi occupation force.

The pilots who gave everything in the aerial fight for British freedom were named ‘The Few’, after a speech from Sir Winston Churchill, who said: ‘The gratitude of every home in our island, in our Empire, and indeed throughout the world, goes out to the British airmen who, undaunted by odds, unwearied in their constant challenge and mortal danger, are turning the tide of the world war by their prowess and by their devotion.

‘Never in the field of human conflict was so much owed by so many to so few.’ 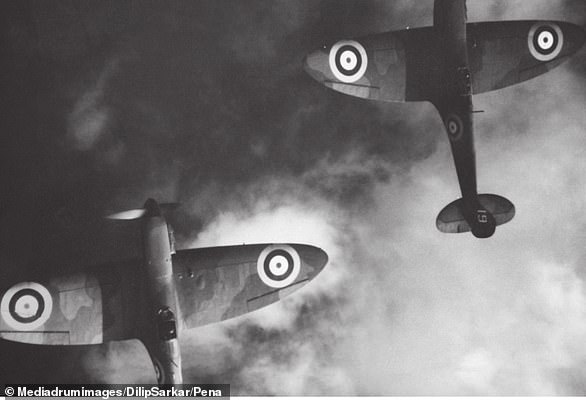 ‘Never in the field of human conflict was so much owed by so many to so few’ (pictured: An aerial photograph of Spitfires)

After the fall of France to the Axis in May 1940, German High Command considered how best to push the fight across the English Channel to take Britain out of the fight.

Up until mid-July the German campaign consisted of relatively small-scale day and night air raids, targeting towns, aerodromes, ports and the aircraft industry.

But the Luftwaffe was at full readiness, ready to ramp up attacks on ships and ports and eliminate the RAF in the air and on the ground.

After the Allies were defeated in western mainland Europe, the German Air Force set up bases near the Channel to more readily take on Britain, hurriedly establishing the infrastructure needed to co-ordinate an aerial conflict with the UK.

As the Battle of Britain begun, the Royal Air Force consistently downed more Axis aircraft than they lost, but British fighters were often overwhelmed by the greater number of enemy aircraft. 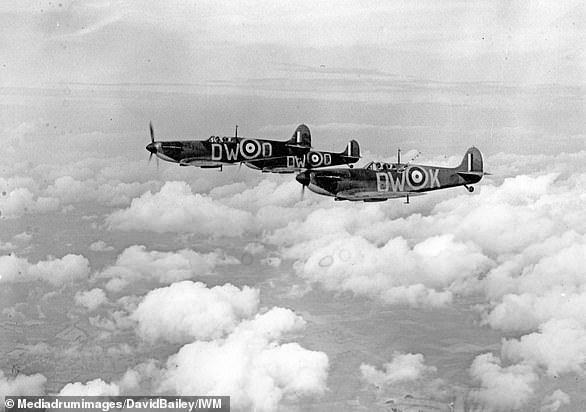 Pictured: One of the most iconic images of the summer of 1940 and the fight above Dunkirk, with Squadron 610’s F/Lt Ellis pictured at the head of his section in DW-O, Sgt Arnfield in DW-K and F/O Warner in DW-Q

Fighting in France and Norway had left British squadrons weakened as the time now came to defend the homeland from Nazi occupation, but as the year went on, the RAF’s fighting force increased in strength, with more pilots, aircraft and operational squadrons being made available.

The Luftwaffe started a mounting campaign of daylight bombing raids, targeting strategic targets such as shipping convoys, ports, and airfields – and probing inland to force RAF squadrons to engage in an attempt to exhaust them.

German air units also stepped up night raids across the West, Midlands and East Coast, targeting the aircraft industry with the objective of weakening Britain’s Home Defence system, especially that of Fighter Command, in order to prepare for a full-scale aerial assault in August.

Heavy losses were sustained on both sides.

The main Luftwaffe assault against the RAF, named ‘Adler Tag’ (Eagle Day), was postponed from August 10 to three days later due to poor weather. 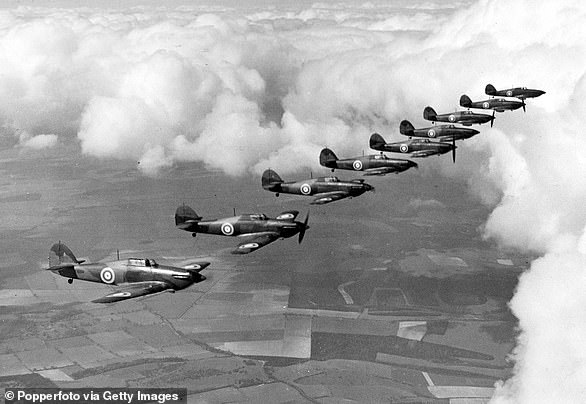 Hawker Hurricane planes from No 111 Squadron RAF based at Northolt in flight formation, circa 1940 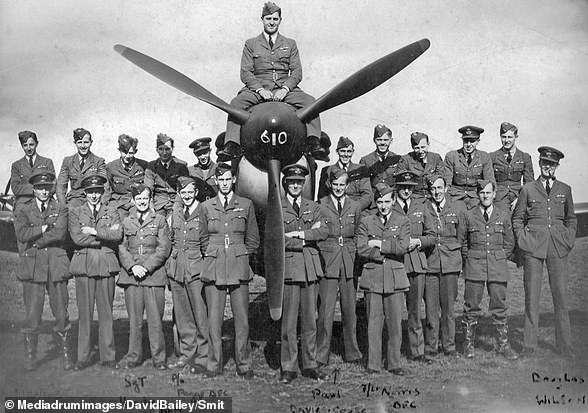 Pictured: Squadron 610’s fighter pilots, a unit which witnessed some of the most intensive aerial combat in the Second World War (taken at RAF Acklington, in Northumberland, between 17-19 September 1940)

The Luftwaffe battled ruthlessly in an attempt to exhaust Fighter Command through ceaseless attacks on ground installations, which were moved further inland, with airfields in southern England facing intensive daylight raids while night attacks targeted ports, shipping targets and the aircraft industry.

But despite sustaining heavy damage across the south, Fighter Command continued to push back against the Germans in a series of air battles, which inflicted critical losses upon the enemy, who thought the RAF would have been exhausted by this point.

Both sides feared becoming exhausted through the constant engagements. 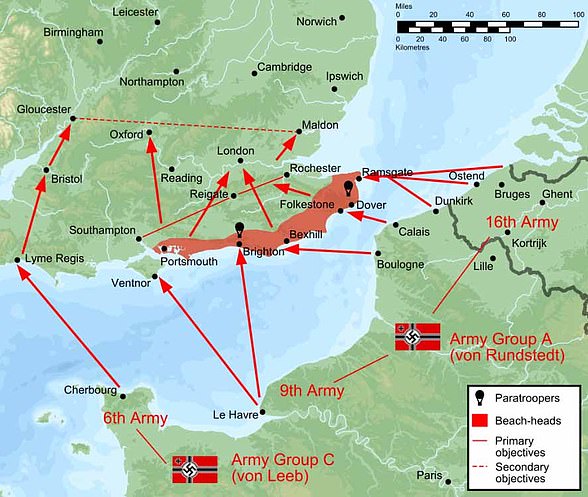 Pictured: German plans to invade Britain, if naval and air superiority was achieved

Focus of the German attacks then shifted to London, where the RAF would lose 248 and the Luftwaffe would lose 322 between August 26 and September 6.

By September London had become the primary target of Luftwaffe aggression, with large-scale round-the-clock attacks carried out by large bomber formations with fighter escorts.

German Air Command had still not exhausted the RAF as it had hoped to, and British forces continued to face off against their German counterparts, with Fighter Command pushing back Hitler’s forces, forcing German invasion plans to be postponed.

By October, it had become apparent to the Germans that the RAF was still very much intact, and the Luftwaffe struck against Britain with single-engined modified fighter-bombers, which were hard to catch upon entry and still dangerous on their way out.

By the middle of the month German strategy had pivoted from exhausting the RAF to a ruthless bombing campaign targeting the Government, civilian population and the war economy – with London still the primary target.

But as of November, London became less of a target, with the Battle of Britain morphing into a new conflict – the Blitz.