That amounts to a lot of impact on the environment. An estimated 80 percent of all sneakers end up in landfills. And this is partially because they are so hard to recycle. “A typical pair of running shoes comprises 65 discrete parts requiring more than 360 processing steps to assemble,” a Massachusetts Institute of Technology study noted in 2013. That includes various plastics, potentially poisonous adhesives and other chemicals like dyes.

Many shoe brands have been looking into recycling, adapting materials or manufacturing processes for some time, but if they’re simply recycling potentially toxic materials, then it’s only postponing the problem.

That is why the next goal is a pair of truly “circular” running shoes — that is, footwear that can be completely recycled at the end of its life and used to make a new pair of the same shoes. The manufacturer then ostensibly controls all of the required materials in what is known as a “closed loop.” A truly circular running shoe is the holy grail of environmentally friendly sports footwear.

Dressing Up: Greatest Party Looks From the Fairchild Archives

According to Nicoline van Enter, a footwear industry futurist based in the Netherlands and director of Footwearology, an online academy, the companies leading this “arms race” in Europe are Adidas from Germany, On Running from Switzerland and Salomon from France. All three are taking different approaches, she says. 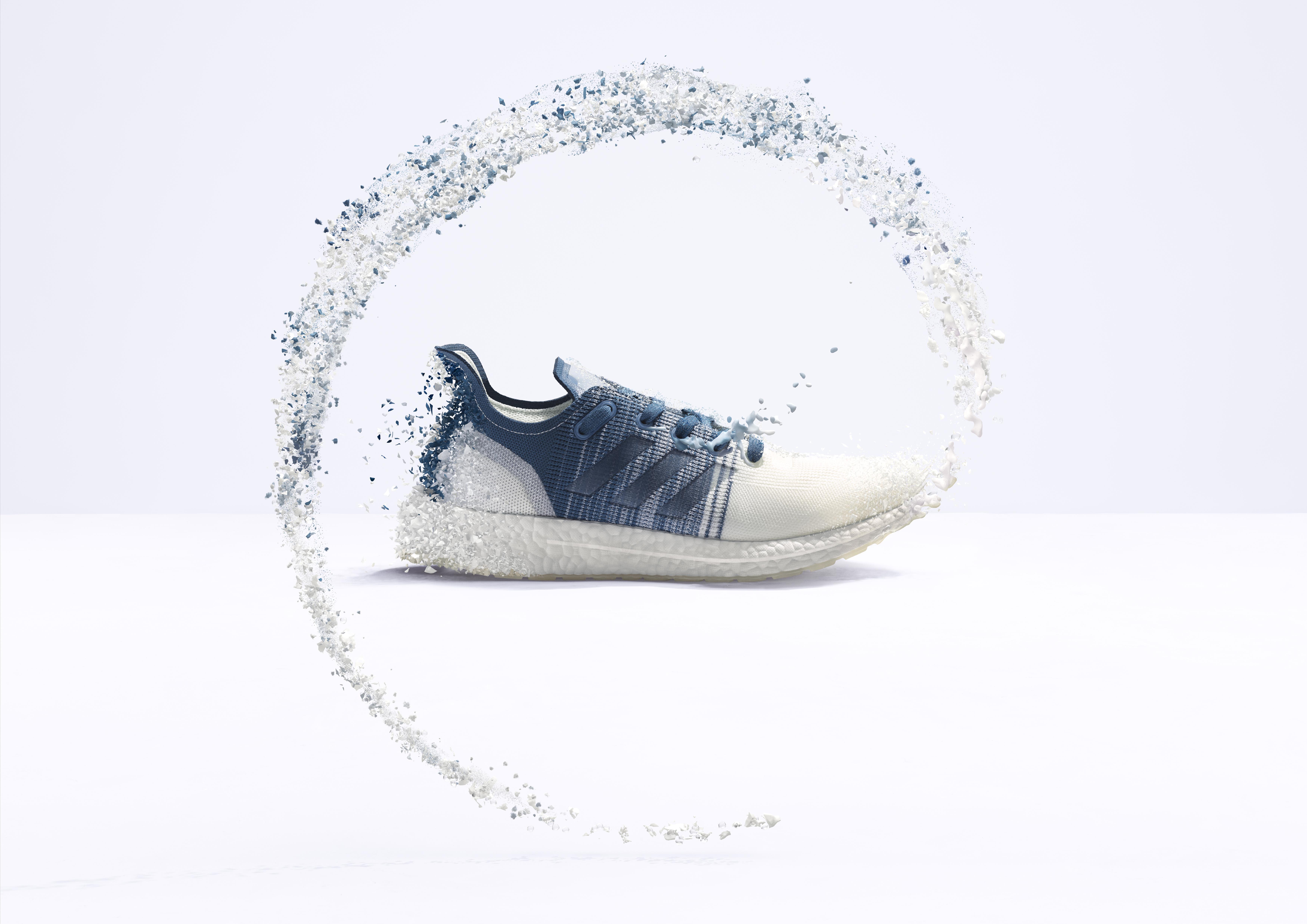 Adidas’ project, named Futurecraft.Loop, is the only one of these models already in use. After a decade of research, the German company has developed a shoe made from only one material — thermoplastic polyurethane, or TPU — and no glue.

In April 2019, the company dispatched 200 sample pairs. After getting that first edition back from users in 2020, Adidas cleaned the used shoes and recycled parts of them, turning the TPU back into pellets that were then used to make the second edition of the shoe.

In a statement, Adidas said it plans to launch Futurecraft.Loop commercially this summer.

Salomon’s shoe, named the Index.01, is also made solely from TPU and, when the shoes are returned, the company will also be able to recycle parts of it, turning the TPU into pellets and then making them part of the shell of an alpine ski boot. Salomon said the Index.01 will be available to customers this spring.

Salomon’s shoe, named the Index.01, will become part of a ski boot at the end of its life.

Meanwhile, Swiss performance running brand On is taking a slightly different tack. Its Cyclon subscription service will see runners receive the latest version of a running shoe, also called Cyclon. Over half of the shoe will be made out of biological materials derived from castor beans.

Having paid a $29.99 subscription fee every month, customers can return the Cyclon at the end of its life and receive a new pair. The company will then recycle the returned shoes, with some of the old materials used in other On products. The Cyclon subscription service will launch in the second half of 2021, the company said.

Footwear consultant van Enter praised each of the brands’ efforts but, she told WWD there are still problems with each project.

“With Adidas, they haven’t told us how much of the old shoe will make it into the new shoe. If it’s just 10 percent recycled materials, then the new shoe will still need a lot of virgin components. So even if you get all the old shoes back, you’ll still have to make a lot more virgin material to keep manufacturing the shoes,” she pointed out. Asked for comment, Adidas would only say that “no material is thrown away or wasted” and that “every returned shoe was completely reused.” 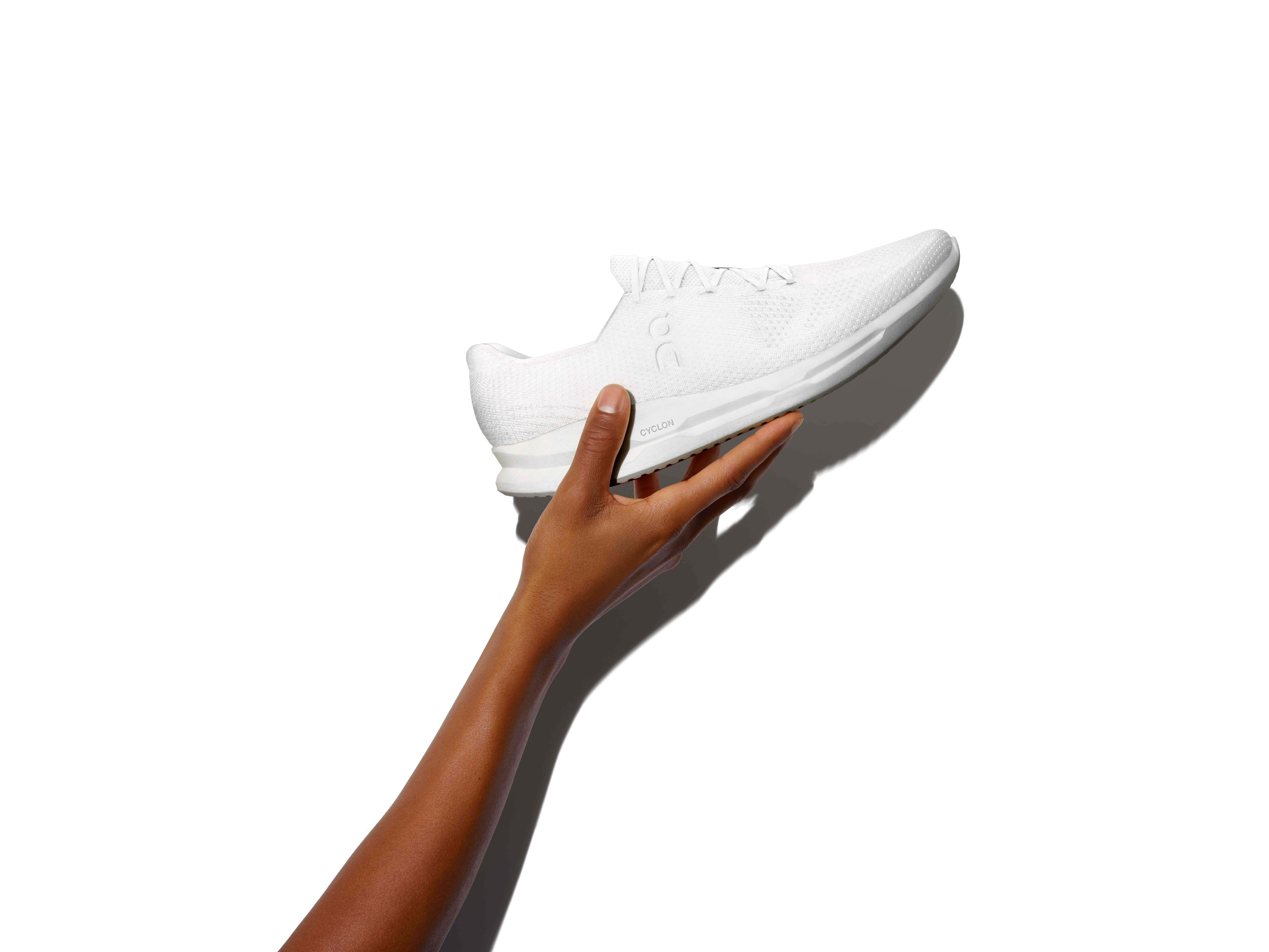 The Cyclon shoe will be available as part of On’s subscription service. Courtesy

Salomon’s approach offers an answer to this, in that the recycled components go into other products made by the same company. Even so, it too will need virgin materials to make ski boots and this means the running shoes wouldn’t be truly circular.

This is why van Enter prefers the term “networked economy” rather than circular. “Making the same product out of the old product is very difficult,” she explained. It makes more sense for an old running shoe to end up as, say, part of a molded plastic chair; then that the chair eventually ends up as the filling for a couch, and so forth and so on, she argued.

With circular running shoes, there’s also the problem of getting people to bring the shoes back in the first place, van Enter said. What if sneaker collectors want to keep the valuable first edition, for example?

A spokesperson from Adidas agreed that this had been tricky, even with the limited numbers of shoes it had distributed: “Not enough people understood clearly enough that they had to give the shoes back, which is not surprising as we’ve never asked this of consumers before. We have to take these learnings forward and adapt,” the spokesperson conceded. In fact, one of the project’s biggest problems recently had been that “we didn’t have enough of the first-generation shoes to create the second-generation shoes in our forecast.”

On’s Cyclon subscription service partially answers that question. But, as van Enter noted, those Cyclon running shoes won’t all come back at the same time and the footwear cannot be recycled individually — it’s far too expensive. For the subscription service to work efficiently, a lot of shoes would need to be coming back all at once. Or, van Enter suggested, the recycling industry evolves technologically where recycling one pair, or a dozen, at a time becomes financially feasible.

Given all the potential hitches, does the footwear consultant think this idea of a circular shoe is just a cute marketing trick? Is a truly circular running shoe even possible?

Yes, it is, van Enter argued, especially if footwear companies continue to transparently share the knowledge they are gaining with one another and push the whole industry forward, and if the plastics and recycling industries continue to develop as they are doing. “And no, I don’t think it’s a gimmick,” she concluded. “These projects are just too complicated and too expensive for the companies to undertake them as a gimmick. They really do mean it. And while some of these projects may not be 100 percent ideal, they are a very good start.”