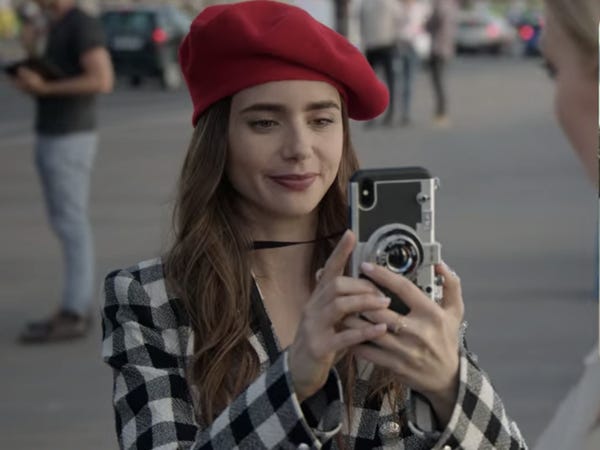 On Friday, Netflix released a new romantic-comedy series, "Emily in Paris," which comes from "Sex and the City" creator Darren Star.

The show follows Emily Cooper (Lily Collins), a millennial who moves from Chicago to Paris for a job in social media and marketing. Along the way, she navigates culture shock, love, friendships, and workplace roadblocks — all while sporting outfits that are sparking comparisons to the costuming of other rom-com series, including "Gossip Girl."

To the delight of fans admiring the fashions created by the series' costume designer, Marilyn Fitoussi, some of the clothes and accessories that are worn by Collins in "Emily in Paris" are still available.

For starters, the phone case that Collins carries in the show — which is made to look like a vintage film camera, complete with a strap to wear the gadget like a necklace — has seemed to already inspire some viewers.

"[Four] minutes into 'Emily In Paris' E01 and I'm googling her phone case to purchase," one Twitter user wrote on Saturday.

Another user tweeted on Saturday that watching "Emily in Paris" led them to search on Amazon for a camera-printed phone case, but that a similar design they found was sold out.

Refinery29 also shared a selection of vintage camera-style iPhone cases that were available Amazon from between $9 and $12. At the time of writing, those three cases were also sold out on Amazon.

Fans hoping to emulate Emily Cooper's signature accessory aren't completely out of luck, though. The brand Casetify sells a camera-inspired phone case for Apple and Samsung phones that range in price from $44 to $50, depending on the level of drop protection the particular case offers.

In the show's first episode, Collins wears a yellow top and midi-skirt with a bandana-style print from the brand Ganni, as pointed out by the Daily Mail in August 2019, when the show was being filmed. The Ganni Hemlock printed tank top is available for purchase on The Outnet for $64 at the time of writing.

The Ganni matching skirt was listed on Shopbop for $395 but is sold out at the time of writing.

In the show's ninth episode, Collins' character sports a plush, light-pink crossbody bag, which Refinery29 identified as Kate Spade's Nicola Faux Fur chain wallet, which is out of stock on the brand's website.

However, another version of the style in a similar light-pink color — with a shimmer texture opposed to a furry fabric — is available for $99 on the Saks Off 5th website.

Season one of "Emily in Paris" can be streamed on Netflix.

Representatives for Netflix, Ganni, Kate Spade, Amazon, and Casetify, and Etsy sellers AlphaCases and CrankCases did not immediately respond to Insider's requests for comment.