A nutritionist and chef has listed the four major mistakes impacting your energy levels, from poor sleep to elevated stress and an imbalanced gut – and revealed how you can transform your health today.

Lee Holmes, from Sydney, said if you regularly feel groggy, headache-y and tired, then you probably suffer from depleted energy.

And while you might think this is part and parcel of life, there are plenty of strategies that can help. A nutritionist and chef has listed the four major mistakes impacting your energy levels, from poor sleep to elevated stress and an imbalanced gut (Lee Holmes pictured)

The first reason why your energy levels might be bad is down to poor sleep.

‘Poor quality sleep, combined with a short amount of time spent asleep, is one of the biggest culprits behind low energy levels,’ Lee wrote on her website.

‘If you’re not sleeping deeply or for a long enough time, your circadian rhythm or sleep/wake cycle – which regulates feelings of sleepiness and wakefulness – will be disturbed, causing low energy levels.’

You should be aiming for between seven and eight hours of sleep per night, and this sleep should be consistent and unbroken.

If you’re struggling to get this, then the best things to do is set a consistent bed time and wake time, create a bedtime routine to prime your body and help you fall asleep and sleep in a completely dark environment.

You should also expose yourself to bright light, preferably the sun, as soon as you rise.

It’s worth trying to get on top of this in any way you can. When you’re chronically fatigued and low on energy, you can feel permanently stressed and exhausted, Lee (pictured) explained

Stress is one of the biggest draws on your energy.

When you’re chronically fatigued and low on energy, you can feel permanently stressed and exhausted.

And according to Lee, as recently as 2018, an estimated 2.4million Australians felt this way.

Fix this by clocking off from work when you can from work, taking a few deep breaths, moving your body and eating nourishing foods.

Lee loves calming foods like soups and stews, which can work wonders for your overall well-being.

She also recommends something called Fulvic Acid, which is used in the Indian system of Ayurveda.

It holds adaptogen qualities, which means it helps the body adapt to stress.

Lee drops something called Fulvic Humic Concentrate into her water every single day, which helps to boost mental health, enhances gut healing, and supports the integrity of the gut lining.

‘The gut microbiota regulates several processes in the body, including the absorption and digestion of nutrients; this plays a significant role in sustaining energy levels,’ Lee explained.

So, if you’re always eating the wrong foods, then your energy levels will be depleted and you’re likely to feel worse.

Replace high-sugar and caffeinated foods with plenty of healthy protein, fats and salads. 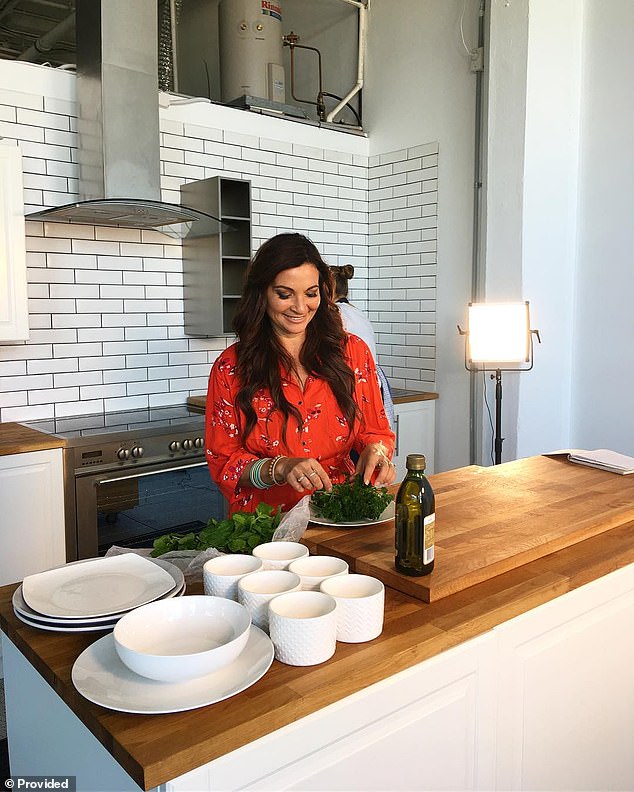 ‘I know that when you’re tired, you’re likely to grab that cup of coffee and a sugary snack for some energy, and sure, that will give you a quick energy boost,’ Lee (pictured) said

Finally, if you’re eating an inflammatory diet that is full of caffeine and sugar, then it’s no wonder you always feel rubbish.

‘I know that when you’re tired, you’re likely to grab that cup of coffee and a sugary snack for some energy, and sure, that will give you a quick energy boost,’ Lee said.

‘However, the research shows that a few hours later, you’ll have less energy than before your treat.’

Instead, try and limit your coffee to one per day, ideally before midday, and if you’re consuming a higher in sugar food, add a quality source of protein to slow down a possible blood sugar spike.

You should also make sure you’re drinking around two litres of water per day in order to stay well-hydrated.