During the opening moments of The Good Liar, we flip between Ian McKellen and Helen Mirren as they fill out a form on an internet dating service, perpetrating a few pardonable untruths along the way. Later, when they meet over dinner, McKellen’s Roy Courtenay is the first to come clean, explaining to Mirren’s Betty McLeish he can’t go on deceiving her because he abhors dishonesty. 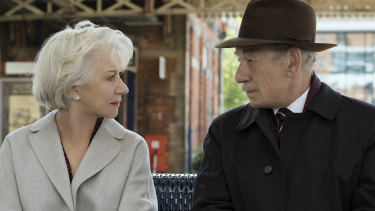 Naturally, he’s protesting too much. Straight after waving goodbye, he heads for one of London’s better known strip clubs to go to work on two gullible businessmen whom he and his fellow conman, Vincent (Jim Carter), have in their sights.

It’s already clear Betty, a cashed-up widow, is next on his list.

The film is an adaptation of a debut novel by Nicholas Searle, a former British intelligence officer who completed it while studying at a writing school set up by the literary agents Curtis Brown. When published in 2016, it was an immediate success, inspiring a contest for the publishing rights, along with comparisons to the work of John Le Carre.

Searle has said he believed it to be unfilmable as it moves back and forth in time, spans 70 years and has a large cast of characters. But director Bill Condon and screenwriter Jeffrey Hatcher have compressed the timelines, streamlined the cast, adjusted the pacing and re-arranged the twists that shape Searle’s serpentine structure. They haven’t arrived at a perfect solution, but it does keep you interested.

After all, they’re experienced time travellers. Two of Condon’s earlier films, Gods and Monsters (1998) and Mr Holmes (2015), co-written by Hatcher, revolve around characters haunted by their past actions. And both starred McKellen.

This is the first time he and Mirren have appeared in a film together and while the script gives them more or less equal screen time, his is the juicier role. In one scene, he’s all smiles, twinkles and old-fashioned courtliness. In the next, he’s the embodiment of calculated villainy, moving smoothly between smarmy and steely.

When wooing Betty, he makes an unsubtle bid for her sympathy by assuming the crab-like walk of an old man with a bad knee. When threatened by a vengeful victim of one of his scams, he suddenly recovers the speed and agility of a street fighter.

In contrast, Mirren has to bide her time. Although she fortifies herself with a vodka martini at their first meeting, Betty is far from a merry widow. Mirren would always have trouble if called upon to camouflage her intelligence and in this case, she doesn’t really have to try.

You can just about forgive the minor inconsistencies.

While Betty’s house in the suburbs has all the character of a Holiday Inn, it’s hard to see it as a guide to her own character. Listen carefully and you can catch the sardonic note in her affable response to Vince’s suggestion she and Roy pool their finances in a fund guaranteed to double their money in five years.

But Roy isn’t listening, having already written her off as being dull and naive. So he’s the unimaginative one. She’s a time bomb in a cardigan. At this stage, however, it’s impossible to see why she’s waiting to so long to pull the pin.

It’s only when the action shifts briefly to Berlin that we begin to get an inkling of the events powering the whole narrative. And that’s because Roy and Betty are accompanied by her grandson, Stephen (an impressive Russell Tovey), who has the instincts of a guard dog and tenacity of a terrier when it comes to nosing out a secret.

It’s a script so ingeniously put together you can just about forgive the minor inconsistencies that punctuate the action. The pat nature of the feelgood ending is more difficult to overlook, but the film’s main flaws lie in the fact McKellen’s and Mirren’s performances are constrained for most of the film by a such a heavy armouring of politeness.

There’s not enough tension – or intimacy – in their relationship. And as a result, there’s not much suspense. It’s an enthralling exercise but a peculiarly cerebral one – a psychological thriller without the thrills.