In the war against the pandemic, state governments have turned to building hospitals, railway tracks and roads to keep the economy in fighting shape.

State and local government spending surged nationally in 2020-21 on Australian Bureau of Statistics data, with the increase in investment in new buildings up 13 per cent, engineering construction 11 per cent and new equipment spending up 11 per cent. 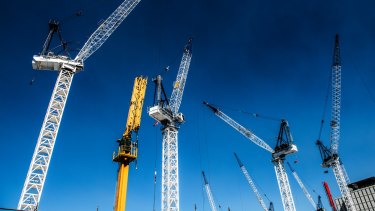 Hospital, school, road and rail projects were the main recipients of the extra public cash being funnelled into the economy. The additional spending provided more services, facilities and job opportunities, but it also helped keep the economy battling in the June quarter.

Public investment totalled a record $29.2 billion over the three months to June, accounting for 5.8 per cent of GDP, largely driven by state and local general government spending as funds were poured into infrastructure and non-housing construction projects nationally.

Market Economics managing director Stephen Koukoulas said without the government spending “GDP would’ve been zero” or near to it.

“The role of government is important as we saw last year and through the GFC,” he said.

Healthcare spending was up, including due to the higher numbers of contact tracers needed on the ground to manage outbreaks, but Mr Koukoulas said the overall outlay was potentially also due to more hospital construction and equipment.

The lift in government investment spending was one of the most encouraging aspects of the latest economic figures for CommSec chief economist Craig James. Public investment added 0.4 percentage points to the June quarter’s 0.7 per cent growth, second only to household spending’s contribution of 0.6 percentage points.

“[The government spending is] highlighting the substantial increases in infrastructure projects that will support the economy over the next few years,” Mr James said. “The massive lift in infrastructure spending will benefit construction, building materials, engineering and mining over 2022.”

State and local government investment in new assets has now increased for six consecutive quarters and was the main contributor to the growth in the public investment sector for the last three.

Over the past year, seven of eight states and territories recorded an increase in per capita investment. This was largest in Victoria and South Australia.

In Victoria, the increase in general state and local government investment was 21.4 per cent on the back of health projects, road and rail infrastructure and second-hand asset transfers from the private sector. In NSW, the same category saw a 3.8 per cent increase due to more spending on health, education buildings and road infrastructure projects. There was also an 8.8 per cent increase in state and local public non-financial corporations spending due to ongoing rail investments.

In Queensland, rail and road infrastructure was largely behind a 5.1 per cent increase in state and local government investment while in South Australia and Western Australia it was education, road projects and rail infrastructure leading the charge.

State and territory governments are expected to tap into the war chest even more over 2022-23 in NSW, South Australia, Tasmania and the ACT with spending to remain at elevated levels in Victoria and Queensland.

“I think public investment, particularly in infrastructure projects, are going to be very important for the recovery and as you know we have a $110 billion pipeline which we continue to add at each budget,” Mr Frydenberg said.