Grace Cummings is a creature of two worlds: an accomplished stage actress and a lauded singer-songwriter.

One world is a collective pursuit: but for Cummings, writing music is a personal journey – and not just because of the pandemic. 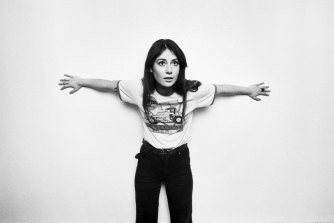 Grace Cummings is about to release her second album, Storm Queen.

“I always do work by myself when I’m writing,” she says. “As an actor you work very collaboratively, then [when] you’re in a band and you’ve got something, you work with people to move it forward and to make it into something interesting.

On the musical stage she sheds all costumes and scripts to bare her fears, hopes and revelations in raw, riveting folk rock.

Her new sophomore album, Storm Queen, is wild, tempestuous and dramatic – but anchored by her earthy vocals.

Her voice forms the bond between her two worlds: the gravitas that emanates from her theatrical vocal delivery. And the deep, smoky singing voice that’s a revelation.

“I think I was a little bit shocked when I found out that that was coming out of my mouth but it’s also pretty cool. It’s exciting to be able to sing and I don’t think I ever modelled it on anybody else … Subconsciously you pick up things from what you love in your phrasing, but that’s like living overseas for long enough – you pick up the accent.”

Her musical accent was influenced by the artists she has on high rotation.

“[Bob] Dylan’s pretty up there, Van Morrison’s a big one for me … Grace Slick is a huge one and Buffy Saint-Marie, she kind of blew my f—ing socks off when I heard It’s My Way and she sings a song called Cod’ine. It’s just her and an acoustic guitar, and she just wails through this thing and it gets bigger and bigger. The way she sings it is so powerful and so emotional, I kind of lost my shit when I heard that. It’s outrageous.”

Storm Queen is powerful, too. Cummings’ 2019 debut album Refuge Cove was a paean to Wilsons Prom in Victoria’s south-east, where she has immersed herself in beauty and solitude as a regular visitor for many years, but it was another part of Victoria that inspired songs of devastation, renewal, divinity and sacrilege.

“A lot of the songs that I’ve written come from a place that I’ve been going to for many years in East Gippsland that is beautiful, lush and green with rolling hills and forest for kilometres. I had three experiences over writing this album: the first was being there when it was that beautiful, the second was when it was all burnt to the ground and completely black, and the third was observing the new, young growth after the fire and the rain.

“Driving through, there were two main colours: black and a kind of unbelievable, Scottish green emerging from ash, really. The contrast between those two things is quite heavy on the eyes and to think about really.”

That contrast is played out in the gothic, bluesy folk of the album – both thrilling and soothing by measure. On the stunning title track Storm Queen, featuring Harry Cooper on baritone saxophone, Cummings croons: “It’s the time for life, not dying, not dying.”

The sax wails, the acoustic guitar tries to hold the whole maelstrom together and Cummings is there at the centre of it all as the valiant Storm Queen.

She has previously toured with acts such as Evan Dando and J Mascis and in February she hits the road with Gareth Liddiard’s supergroup Springtime.

As for her acting career: in Joanna Murray-Smith’s play Berlin, staged by the Melbourne Theatre Company last year, Cummings attracted praise for her role as Charlotte, a Rilke-loving poet and underground bar owner. Cummings had a recent lunch date with the playwright, but she is keeping any announcements close to her chest.

“I love Joanna and we work well together and I think I’ll be seeing a lot of her in the next little while, but [there’s] nothing in front of me right now.”

Storm Queen is out on January 14.