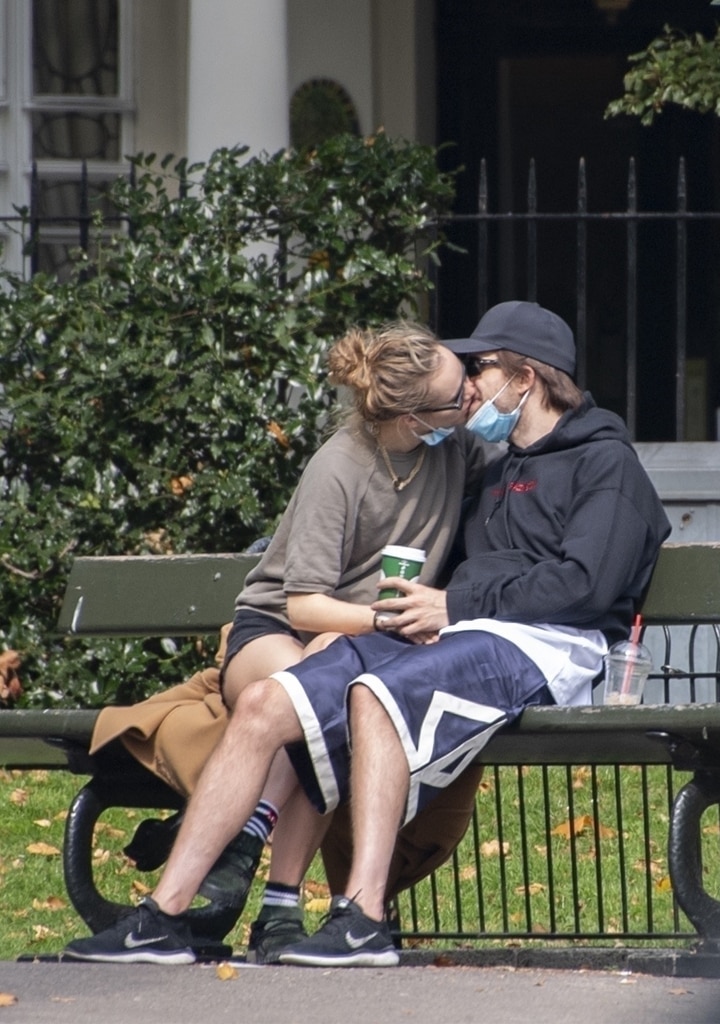 Two weeks after reports spread that Robert Pattinson had tested positive for coronavirus, the 34-year-old actor was spotted kissing his girlfriend Suki Waterhouse in London.

The couple, who has been social distancing together, got cozy on a bench during a stroll through the park on Wednesday, Sept. 16. The Twilight alum kept things casual by wearing a pair of blue athletic shorts, a dark sweatshirt and sneakers. He also shielded his eyes from the sun by wearing a baseball cap and sunglasses. As for the 28-year-old model, Waterhouse donned a gray T-shirt and black shorts. She also brought along a camel-colored coat to keep warm and swept her hair up into a messy bun. In addition, they each had a face mask on that had been pulled down for the kiss.

Citing "two people with knowledge of the production," The New York Times reported on Sept. 3 that Pattinson tested positive for coronavirus. The news came after Warner Bros. confirmed in a statement that "a member of The Batman production" had tested positive for COVID-19 and was "isolating in accordance with established protocols," resulting in filming being "temporarily paused." However, the studio did not name the person. Pattinson's team also didn't respond to E! News' request for comment.

On Sept. 17, MailOnline reported Pattinson had returned to The Batman set. Warner Bros. also confirmed to E! News it had resumed filming "following a hiatus for COVID-19 quarantine precautions." No other details were revealed.

This was the second time production had been postponed. The first was in March, again due to the global coronavirus pandemic. At the time, Pattinson suggested he was looking forward to returning to the role.

"As many of you probably already know, we were in the beginning stages of production when COVID hit, so now I'm very anxious to get back to work and continue to form this beloved character," he said at a DC Comics' FanDome event in August. "I've always been a massive fan."

News of Pattinson's casting as Bruce Wayne broke last year. The movie is scheduled to be released in 2021.