RICHARD LITTLEJOHN: Bedtime stories and mindfulness apps? Our civil servants are away with the fairies

Are you sitting comfortably, children? Then I’ll begin. Once upon a time, someone in Whitehall thought it would be a good idea to spend half a million pounds on mindfulness apps and bedtime stories for civil servants.

Nope, I haven’t a clue what a mindfulness app is, either. But the Cabinet Office has splashed out £102,456 on something called Unmind, which is described as a ‘cultural change platform’ and helps ‘empower employees to lead more fulfilling lives’.

Staff will be encouraged to attend meditation sessions and issued with personal journals which allow them to ‘track their own thoughts and feelings’.

The Cabinet Office is just one of six Government departments forking out our hard-earned on this kind of New Age tosh. The Departments for Education; Culture, Media & Sport; and Environment, Food & Rural Affairs, have all signed up to an app designed by a Buddhist monk from Bristol.

It’s called Headspace and has already cost the environment department alone more than £260,000 in subscriptions. Headspace offers its disciples ‘the lifelong skill of everday mindfulness’, along with stories and soothing music to aid restful sleep. 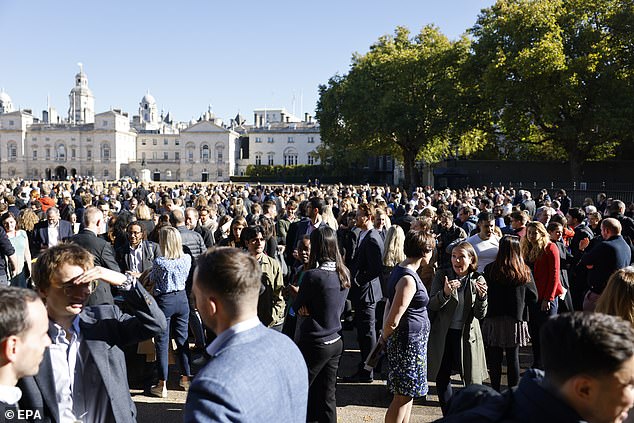 The Cabinet Office is just one of six Government departments forking out our hard-earned on this kind of New Age tosh (pictured: Civil servants outside of Whitehall)

The UK Health Security Agency — ie: the utterly useless, rebranded Public Health England which was supposed to be abolished, but wasn’t — and the Department for Levelling Up have spent £45,000 on giving staff membership of Calm.

Subscribers can relax to bedtime stories read by, among others, the saintly Mary Berry. Chris Advansun, Calm’s Head of Sleep Stories — you couldn’t make him up — said it ‘gives permission to grown-ups to return to what was one of the most comforting and soothing experiences they’d had as children’.

There’s been a lot of talk in the Bubble lately about the ‘grown-ups’ being back in charge of the Government. This must be what they mean.

You won’t be surprised to learn these ‘wellbeing’ organisations are based in California and deal in the type of hippy-dippy drivel which the likes of the Markles peddle.

But why should the Civil Service be ladling British taxpayers’ money in their direction?

If they must persist with this superfluous nonsense, surely a handful of magic beans would work out cheaper.

Not so long ago, about the only perk the Civil Service offered, on top of jobs for life and a gold-plated pension, was a subsidised canteen. When did it become necessary to provide meditation sessions and bedtime stories to help staff unwind?

It’s not as if they’re exactly rushed off their feet. Half of them don’t even bother turning up for work any more, after becoming used during lockdown to lolling about at home on full pay, watching daytime TV and eating Hobnobs. 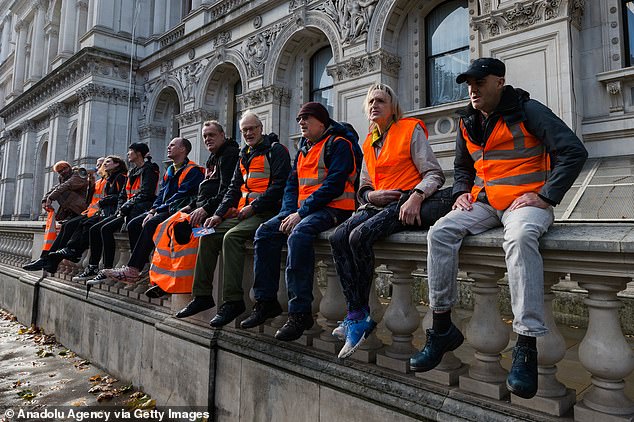 Millions of people are worrying themselves sick over whether they will be able to afford their mortgage payments or to heat their homes this winter. Yet the political class continues to obsess about the ‘climate emergency’ to the point of insanity.

Civil servants now consider WFH an entitlement. Sixty per cent of Foreign Office staff still haven’t returned to their desks. At the Treasury, it’s only 50 per cent. Just as well there’s not much for them to do, like dealing with a war in Europe, or helping to stem the flow of foreign migrants heading our way illegally, or stopping the economy disappearing down the gurgler. Maybe they’re all too busy sitting cross-legged on the floor going ‘OM!’ or curling up to Listen With Mother.

Meanwhile, the country is coming apart at the seams and there are interminable waiting lists for everything from hip operations to driving licences.

It sometimes seems as if we’ve already passed through the looking glass and are living in a fairy tale world, more nightmare than soothing Mary Berry bedtime fable. Millions of people are worrying themselves sick over whether they will be able to afford their mortgage payments or to heat their homes this winter.

Yet the political class continues to obsess about the ‘climate emergency’ to the point of insanity.

Having said initially he wouldn’t be going to the Cop27 jolly-up in Egypt, Dishi Rishi did a reverse ferret and scuttled off to Sharm el-Sheikh rather than incur the wrath of that weird global warming gremlin Greta Wossname and the End of Days doom-mongers.

The latest lunacy is Ed Miliband’s demand for us to pay reparations to Third World countries to acknowledge our ‘historic responsibility’ for creating climate change.

War On Want has even put a price on it. One trillion pounds. Yep, that’s trillion with a ‘t’. Or, to put it in context, roughly a third of all the money generated by the entire UK economy last year. 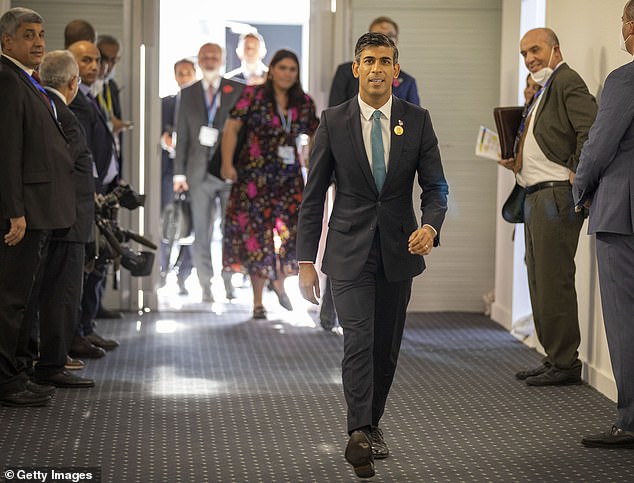 Having said initially he wouldn’t be going to the Cop27 jolly-up in Egypt, Dishi Rishi did a reverse ferret and scuttled off to Sharm el-Sheikh rather than incur the wrath of that weird global warming gremlin Greta Wossname and the End of Days doom-mongers

This is Fantasy Island stuff, but finds a receptive audience. And not just among Just Stop Oil headbangers. Wee Burney has already said she’s willing to bung in a few bawbees. That should make all the difference.

The deranged rush towards Net Zero has been embraced fully by the Civil Service. It was revealed at the weekend that plans are being drawn up to ‘decarbonise’ every single Government building at an estimated cost of £30 billion.

Where’s that money going to come from, then? Coincidentally, it’s not far short of the total amount of spending cuts being prepared by Chancellor Jeremy Hunt. And that’s in addition to tax rises due to be announced later this month.

Yet while one arm of Government is in full financial crisis mode, another is gearing up for a sailors-on-shore-leave spending spree in the name of saving the polar bears.

As far as the Civil Service is concerned, it’s only taxpayers’ money. So what’s another few quid on mindfulness apps and fairy stories? Call it half a mill for cash.

And coming up at bedtime, Mary Berry reads To Hell In A Handcart . . .

The London to Brighton vintage car run, immortalised in the glorious 1953 movie Genevieve, took place at the weekend.

Drivers of open-top vehicles had to contend with Biblical rain storms and flooding. Yet despite getting soaked and being limited to 20mph, hundreds of entrants managed to complete the 60-mile trip. Actually, come to think of it, a 20mph top speed wouldn’t be much of a disadvantage these days. In London and other cities, it’s difficult to get over 20 without breaking the law. In Wales, they’re even talking about slapping a 20mph limit on all residential roads.

When I come to change my 12-year old diesel, I’m thinking of getting a 1903 5hp Vauxhall. I might get drenched, but I wouldn’t get another speeding ticket.

I sometimes think that Just Stop Oil get away with it so often because most of our politicians agree with their cause. Their intention is to force us out of our cars. Frankly, I don’t know why anyone bothers spending a small fortune on a flash new motor. Half the time you can’t get out of first gear, and speed cameras are everywhere.

It can’t be long before they bring back the man with the red flag walking in front. When I come to change my 12-year old diesel, I’m thinking of getting a 1903 5hp Vauxhall. I might get drenched, but I wouldn’t get another speeding ticket.

And when they ban flying, we’ll all have to take our holidays in Britain.

The vintage Vauxhall may not be a top-of-the-range Tesla, but at least it would get me to Brighton.

My Saturday Essay on the report into the shameful response to the Manchester Arena bombing certainly struck a chord with you. Not least among former emergency service workers disgusted at the institutionalised cowardice I described. Thanks for all your emails and comments.

There’s now a campaign to strip Chief Inspector Dale Sexton, who was in overall charge, of the bravery medal he received for his actions on the night. Somebody has to be held accountable for the dreadful dereliction of duty, which left victims bleeding and dying on the floor and may have contributed to at least two preventable deaths. Maybe next time, someone in Sexton’s position will think differently before holding back first responders.

But don’t count on it.

We have become wearily familiar with the world’s battles being fought out on British streets, most recently in Leicester with Muslim and Hindu factions clashing. Yes, the right to peaceful protest is sacrosanct. But demonstrators have got it into their heads that there are no limits. Picketing people’s homes and harassing their families is crossing the line. For the past eight months, opponents of Pakistani cricketer-turned-politician Imran Khan, who survived an assassination attempt last week, have been regularly laying siege to the London home of his ex-wife Jemima. The Khans divorced in 2004 and there is no legitimate reason for targeting her.

Threats have been made against Mrs Khan and her children, both online and in person. Police have attended the demos, but made no arrests, even though the Met is usually keen as mustard when it comes to prosecuting ‘hate crime’. Are they afraid of being accused of racism? I shouldn’t be surprised. It’s time the Old Bill started feeling some collars. This intimidation has to stop. These bullies certainly wouldn’t get away with it in Pakistan.