We were just Common People! Couple whose wedding day featured on the cover of Pulp’s Different Class are STILL together 25 years on – and say they had no idea their photo would be used by the band

The couple from Pulp’s Different Class album cover have revealed they’re still together 25 years on from the record’s release.

Dominic O’Connor, 53 and his wife Sharon, 50, celebrated their wedding day by accidentally becoming part of album artwork history in 1995 in Molesey, Surrey.

The pair, who had just tied the knot, were captured by a photographer friend of the bride’s brother along with his assistant – a pre-fame Rankin – posing with cut outs of the Britpop band members with their wedding party.

Unaware what the image would be used for, they only discovered they were on the cover when Sharon’s parents spotted them in the window of HMV.

A quarter of a century on, the couple are still together and have revealed the not-so-common story of how they ended up on one of the most celebrated Britpop albums in history. 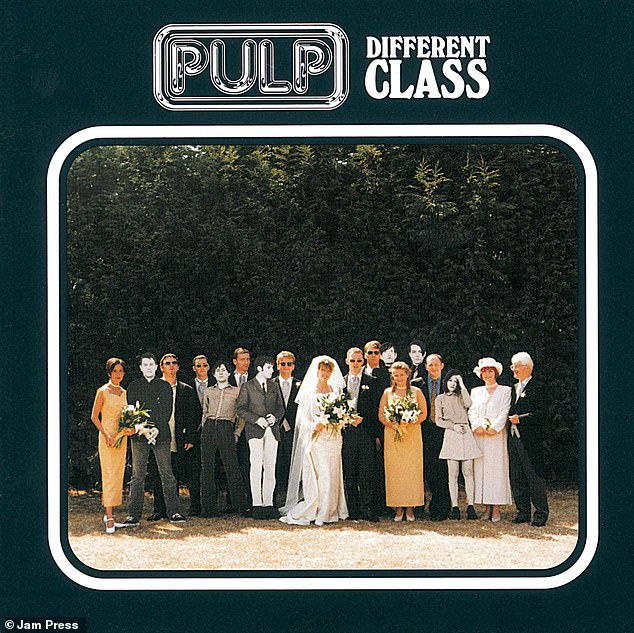 Sharon, 50, and Dominic O’Connor, 53, who met in Haymarket, featured on the cover of Britpop band Pulp’s 1995 album Different Classes, on their wedding day 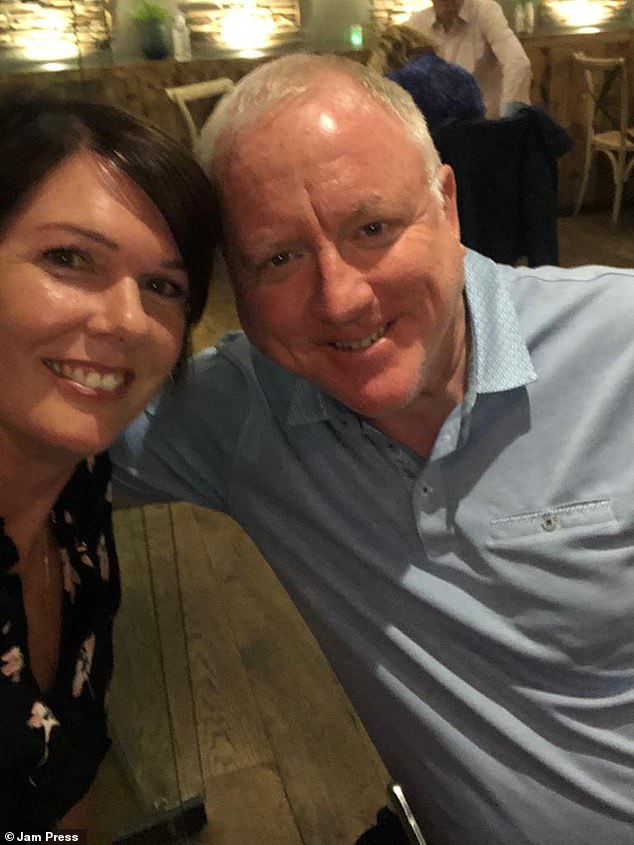 Dominic and Sharon, who are still together, said they had no idea the picture would be used for an album cover

‘Donald was a fan of taking photos for Britpop bands as well as some fashion and art.

‘I met Sharon in December 1991 at the Haymarket Publishing Christmas party. I bought her a pint of white wine and we never looked back!

‘Sharon and I were paying for our wedding ourselves, so we blagged everything. Shaz did the invites, the printers at work printed them for free, we borrowed the wedding car from work and my mate drove it. 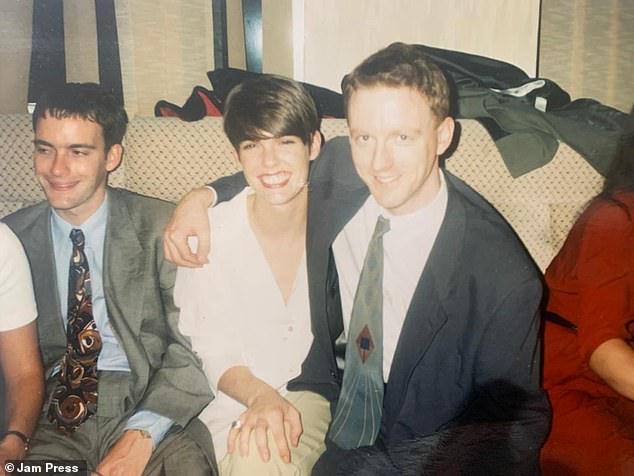 The pair met in 1991 at a Christmas party and soon became an item, tying the knot four years later 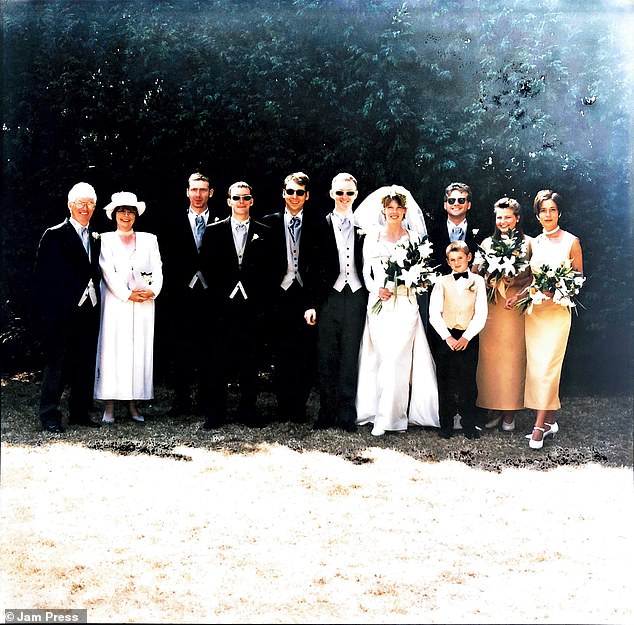 The wedding party at Dominic and Sharon’s wedding, without the famous Pulp cut out featured on the album

‘We asked my brother Ben if his photographer friend Donald could take the wedding pics, but he was unable to at the time.

‘Two weeks before the wedding, Donald called up my brother and said yes he could take the photos – but there was a catch.

‘He told us that he needed to take some images of “common” scenes, including a wedding, for this band called Pulp.

‘He said all we needed to do is pose with life-size cut-outs of the band and once he’s taken these, then he will do some nice wedding ones for us. 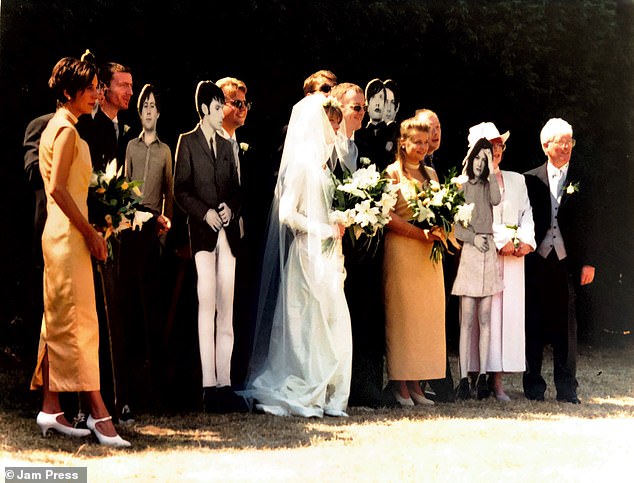 On their big day, the couple, who knew the photographer through a friend, were asked to pose with the cut outs of Jarvis Cocker and the other Pulp members 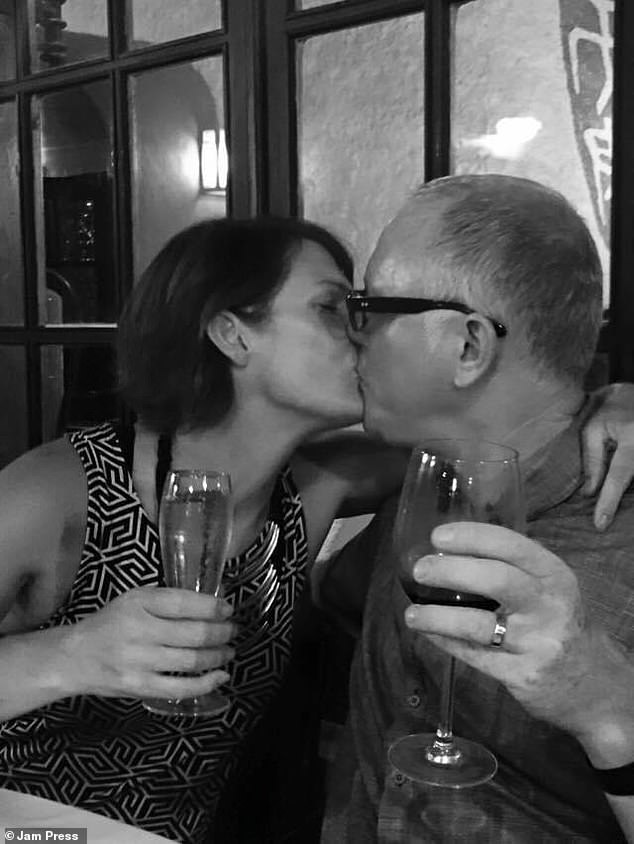 Sharon and Dominic are still very much in love now. They said they only k=heard about the fact Pulp had used their pictures for an album when Dominic’s parents saw the album at HMV

‘Of course we said yes, sure. No one told us what the photos would be used for, just for some sort of “future” use.

‘On the wedding day, Donald arrived with his assistant (now famous photographer called Rankin!), and these big cut-out figures of the band members.

‘We took the silly pictures and then Donald did some nice ones too.’

But despite being aware that these images were for Pulp, the O’Connors had no idea that their wedding would be immortalised in music forever.

He said: ‘The first we heard about it after the wedding was when my mum and dad saw the album cover blown up in a HMV window! 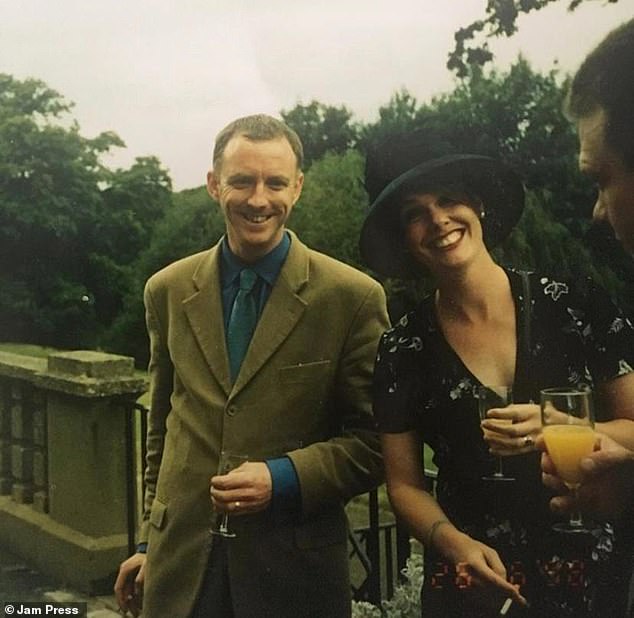 The couple in 1996, a year after their wedding. They explained that the original album had eight different pictures, but that eventually, Pulp kept re-using theirs 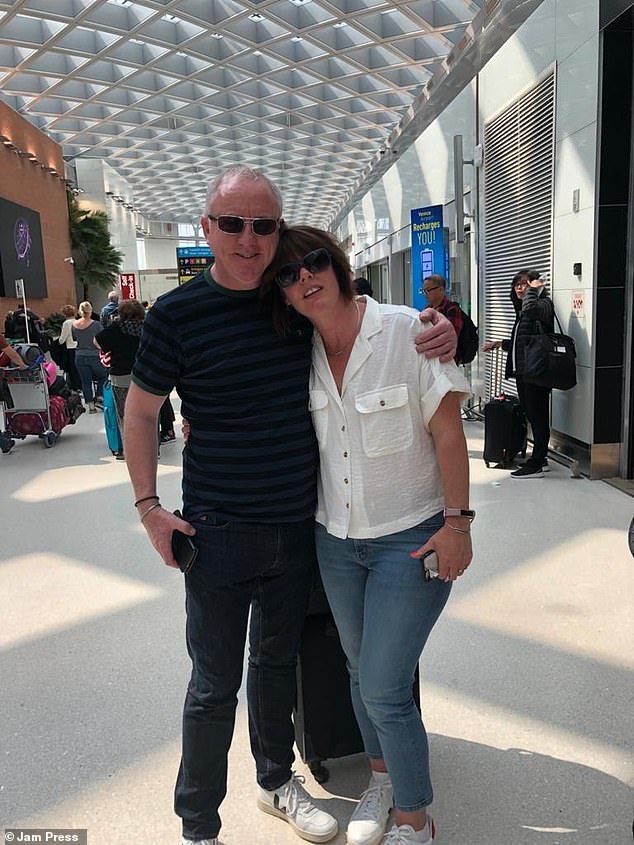 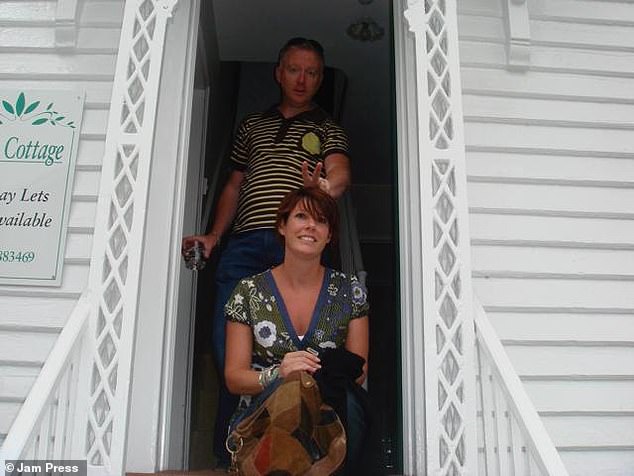 The playful couple, pictured in 2007. Dominic ironically said he knew of Pulp early on, because he is from Sheffield, where the band started

‘The original album had eight different photos on cards that you could slide in and out of the cover and switch the ‘common’ scene on the front.

‘But eventually they just kept printing our wedding photo – it seems the band liked that one best!’

‘The first time me and Sharon ever saw the artwork out and about was when we were driving to IKEA – it was on a huge poster and we nearly crashed the car!’

The couple didn’t originally sign a release form for the image to be used on the album cover, but around seven years ago the record label and the photographer got in touch again. 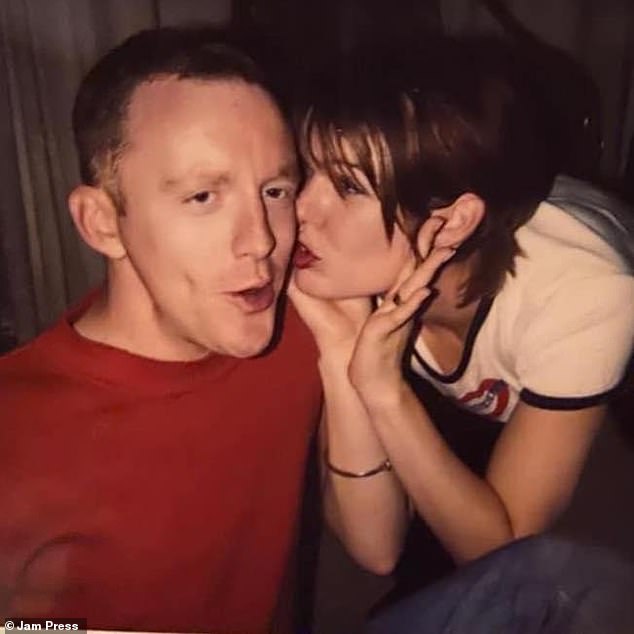 While he features on the Different Classes album by Pulp, Dominic (pictured in 1996 with Sharon) admitted he did not like their music 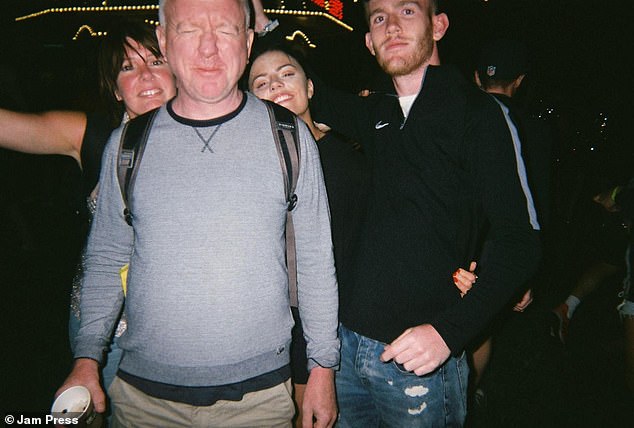 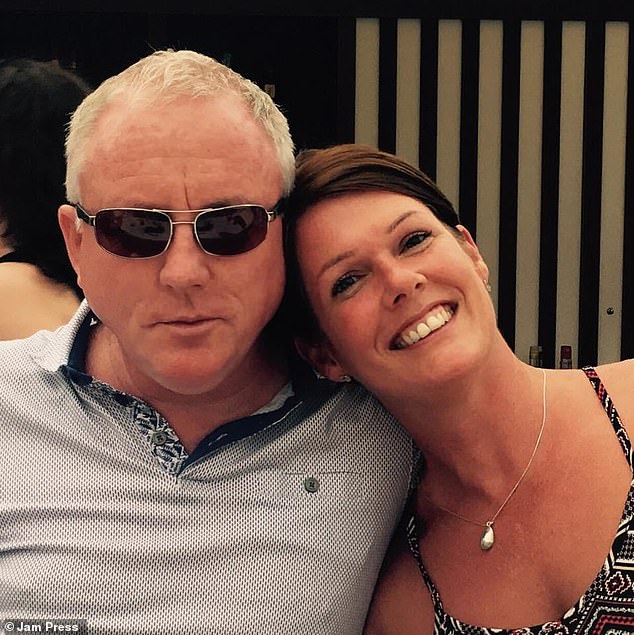 The couple received Pulp merchandise in 2013, from CDs to mugs, and signed poster from Jarvis Cocker

He said: ‘Donald reached out to my brother Ben around the time of Pulp’s reformation, and said they wanted to use the images with proper consent this time.

‘I ended up negotiating with the label Rough Trade and we signed it off properly.

‘I’ve got some of the merchandise they created. They didn’t give us much money for it, but they sent me a load of CDs and mugs etc.

‘They also sent a signed poster from lead singer Jarvis Cocker, saying: “Thank you for letting us crash your wedding again”.’

Although both the couple are now proud of their contribution to music history, Dominic admitted he wasn’t a huge fan of Pulp at the time. 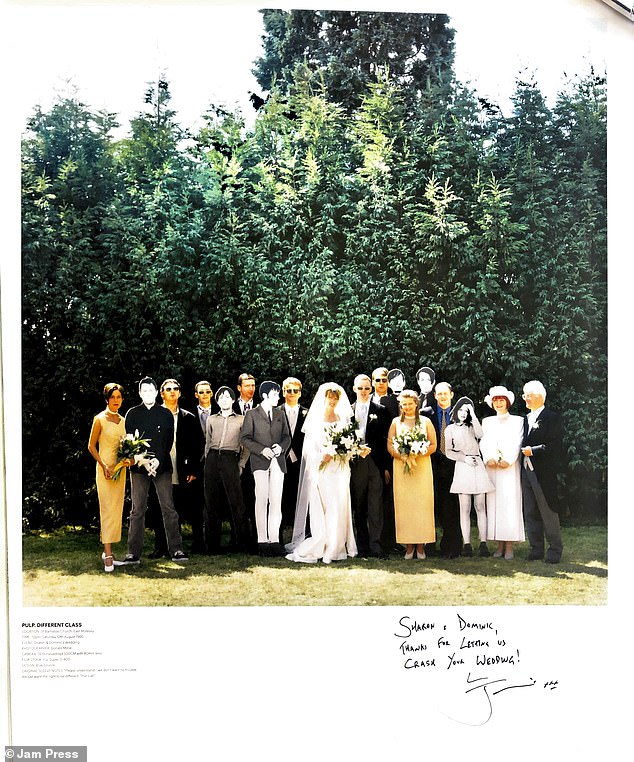 A card with a picture of the wedding signed by Jarvis Cocker, reading ‘Sharon and Dominic, thanks for letting up crash your wedding’ 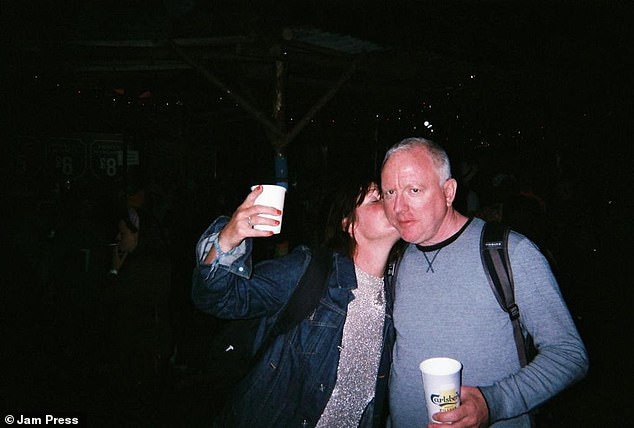 The couple pictured in Glastonbury in 2019. Dominic admitted that he wasn’t much of a fan of Pulp at the time of the wedding

He said: ‘I knew who Pulp were because I went to Sheffield University – where the band is from.

‘I’ve accidentally seen them play live loads of times as they were often playing support for bands I did really like. I didn’t like them much and I actually prefer their previous album!

‘I do occasionally listen to Different Class and I was a fan of Jarvis’ show with Radio 6 Music – he has good musical taste.’

Despite the O’Connors having been a big part of the Pulp’s fame, they have never actually met the band members.

‘My mum and dad went to see them at Middlesbrough town hall and got invited backstage. My parents said they were lovely and were quite excited as of course, they are in the wedding photo too.’

Dominic says he appreciates seeing such a meaningful photo regularly.

He said: ‘It’s nice to be associated with it and to see your wedding photo everywhere all the time.’

The couple currently reside in Surrey with their two children and are still very happily married.

As to what they are doing on the 25th Anniversary?

Dominic says: ‘Chilling at home together, of course!’