In the delivery room of a hospital, as women become mothers, apparently the most common words uttered – or shrieked, yelled and howled – are “I’m never having sex again!”

And that’s just the doctors. 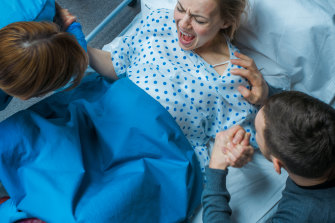 After the birth of our first child in a London hospital, I spent the following two days with my brand-new family in a “private” room directly beneath – and in earshot of – the birthing rooms. Forget fingers down a blackboard or microphone feedback, this megaphone of misery sounded more like people reluctantly ending their lives than voluntarily helping others begin them.

If it wasn’t the sound of women enjoying the most memorable day(s) of their lives, I would have sworn it to be some satanic ritual. And this Sunday, for all that drama and distress, we buy them chocolates and flowers?!

And the suffering isn’t left behind at the hospital. After the stitches in the perineum or the Caesar scar come the sleepless nights, the chewed nipples, the leaky bladder, the saggy sundries. If men had to endure the self-destruction of creation the human race would have died out long ago, probably with the television remote control in its hands.

Speaking of men, I’ve heard it suggested that more women are having emergency Caesareans nowadays because the new-age norm of having their bloke at the birth (while checking his phone and hoping he’s home in time for the footy) is adding to their angst. Perhaps mothers were better off when fathers only participated in the making rather than the breaking of the umbilical cord.

Whether that theory is science or speculation, the physical drama of motherhood is only the first labour of love if a woman wishes to be revered on the second Sunday in May. Then comes the emotional trauma, such as the torrents of tears on the first day of Kindy or the wails and weeps at immunisations.

Then there’s the anxiety of teething, tantrums and toilet training, followed by puberty, piercings and parties, followed by first loves and the fear of drugs. It’s the clichéd rollercoaster of emotions, but at least with rollercoasters you don’t have to worry about whether your loved ones are wearing a seat belt or not.

Then, for all your efforts, you become an embarrassment to them. The ungrateful perishers have the teenage temerity to ask for the full chauffeur service to a party or pub, only to then make you drop them off in a different postcode so their friends don’t spot your lack of street cred, particularly if you’re driving the drab family wagon you had to buy because it had five stars for safety, but none for sexy.

“Then, for all your efforts, you become an embarrassment to them.”

Next comes the financial burden. A UK study I read at the time claimed that from conception to high school graduation the average child costs about £200,000 ($380,000) give or take inflation. And that’s not counting that drab family wagon.

If the above list isn’t insult enough, a mother who dares complain to her child about any item on it will be treated to the perfect comeback – “I didn’t ask you to have me”. Rebellious teenagers will dream up the most fanciful retorts, but that old chestnut is irrefutable.

This cynical look at motherhood is not a criticism of the concept but an attempt to encourage you not to skimp on your mother this Sunday.

Most of us do, of course, adore our mums and wouldn’t dream of not spoiling her at least one day a year. On the whole, Australian mums are pretty good at achieving the right balance of tough love for their kids. Unlike the stereotypical Italian mamma, or mamma-in-law, who, as often as her name appears on Mother’s Day cards, also appears under the “reason for” on divorce papers.

I married an Italian and can say with certainty that there are of course many wise and wonderful Italian mums and mothers-in-law. But they are famous for smothering their children with affection, so much so that it gave rise to the famous saying: “Jesus Christ must have been Italian because he lived at home until he was 30 and his mother told him he was God”.

Italian mothers aren’t ashamed of their intrusiveness. On an Italian TV show where couples in crisis air their differences in an attempt at reconciliation, one woman gave her lover – who was sitting in the studio audience to remain anonymous – an ultimatum.

“It’s either me or your mamma,” she said. “Stand up if you choose me.”

“I choose you,” said the man, standing up.

“No he doesn’t,” said his mother, standing up beside him.

Despite handing me down some unfashionable genes, my own mother is the most kindhearted, selfless and caring person. She has taught me many things (including never to be biased). And by way of thanks for all the love and support she has given me, I will spoil her this Sunday.

Make the most of your health, relationships, fitness and nutrition with our Live Well newsletter. Get it in your inbox every Monday.

Most Viewed in Lifestyle