In two snaps shared by the royal household on Instagram, the 13-year-old son of Prince Joachim and Princess Marie can be seen giving the camera a tranquil smile.

The teenage prince lives in Paris with his father, mother and older siblings, where his dad took a job as a Defense Attaché at the Danish Embassy in 2020. However, he will be celebrating his birthday in Denmark.

Henrik is ninth in the line to the throne and holds the title of Count of Monpezat. 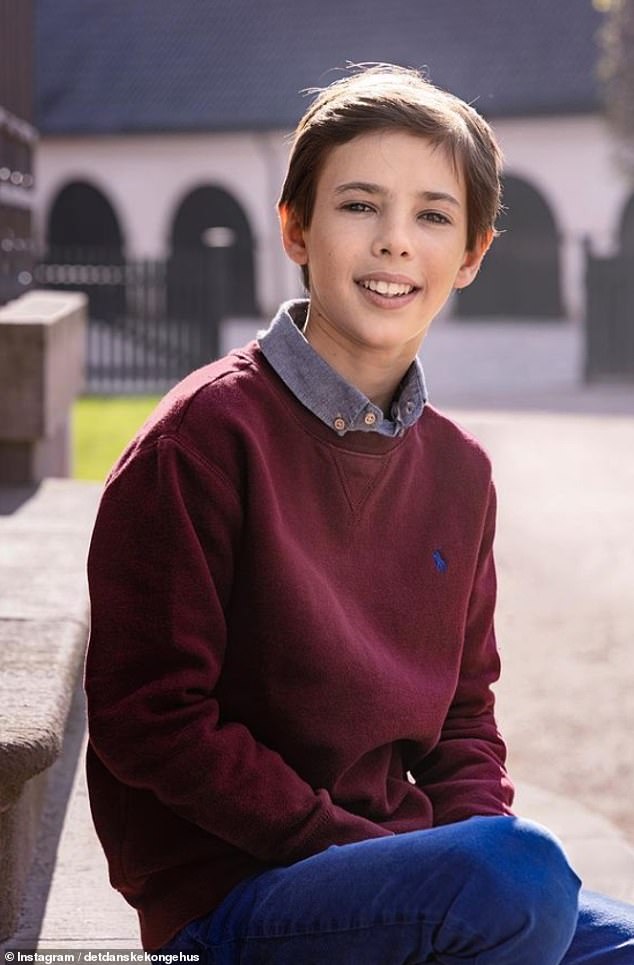 In two snaps shared by the royal household on Instagram , the 13-year-old son of Prince Joachim and Princess Marie can be seen giving the camera a tranquil smile

In one snap, the teenager looks quietly at the camera, sat on the steps outside his family’s home in Denmark.

He is wearing a burgundy Ralph Lauren sweater, which he wore in previous pictures taken over Christmas, with a light blue shirt as well as a pair of blue chinos.

In the second picture, which is a close up portrait, Henrik gazes into the camera, a sunbeam highlighting his brown hair.

While Henrik and his parents live in France, where he is schooled, they made the journey back to Denmark to mark his birthday. 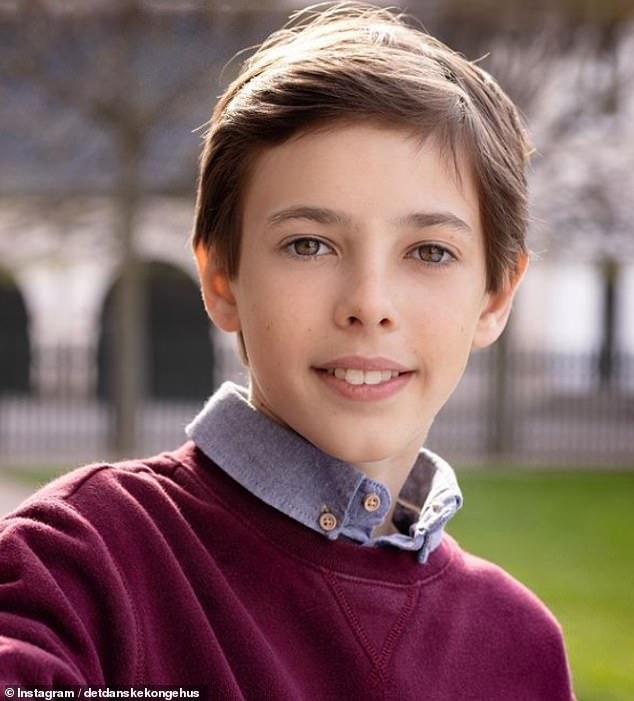 In one snap, the teenager looks quietly at the camera, sat on the steps outside his family’s home in Denmark 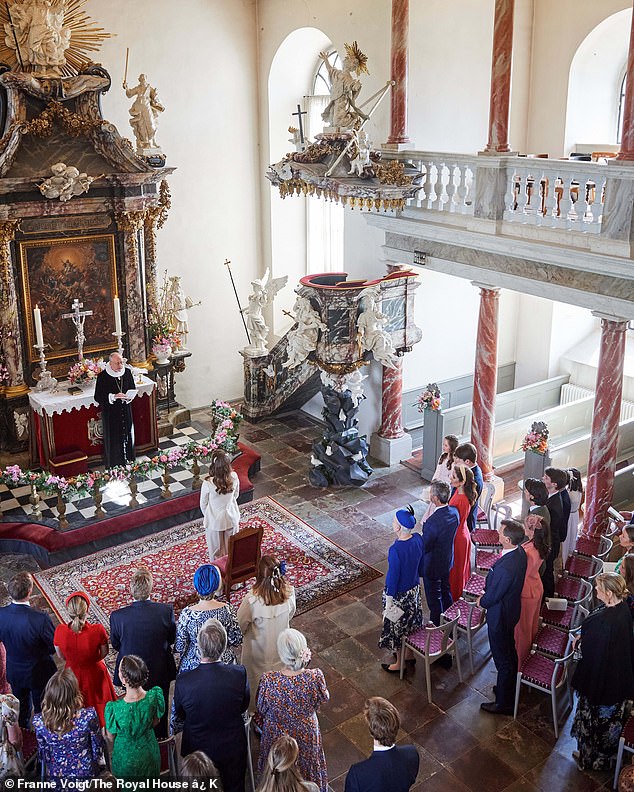 Prince Joachim, Princess Marie and their children stood in the second row during the confirmation of Princess Isabella, 15, last weekend

‘On the occasion of the birthday, it is a great pleasure for Your Royal Highnesses Prince Joachim and Princess Marie to share new photos of the family’s teenager.

‘Prince Henrik, who lives in Paris with his family on a daily basis, celebrates his birthday in Denmark,’ it went on.

Joachim and Marie have travelled back to Denmark on several occasions, especially this year, which marks his mother Queen Margrethe’s Golden Jubilee, marking her 50th year on the throne.

Last weekend, Joachim and Marie were present as their niece Princess Isabella of Denmark celebrated her confirmation day in spectacular style by donning her mother Mary’s iconic white pantsuit and Queen Alexandrine’s pearl and diamond brooch. 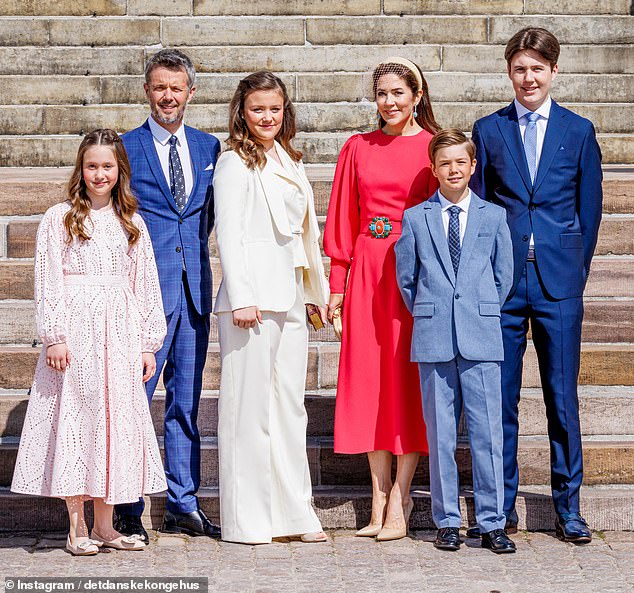 The Danish royal family assembled on Saturday at Fredensborg Castle Church in Fredensborg, Denmark, to herald the special occasion with Crown Princess Mary, 50, and Prince Frederik, 53, joined by their four children Christian, 16, Isabella, 15, and twins Josephine and Vincent, 11.

Hobart-born Mary looked every inch the royal in an amaranth-coloured gown for the event, but it was Princess Isabella in a borrowed Max Mara blazer and brooch belonging to the late Queen that held the attention of her peers.

Even her youngest sister Josephine got involved in the clothes swapping fun by wearing a pink dress once wornby Isabella. The men of the family kept things classy and simple in statement blue suits. 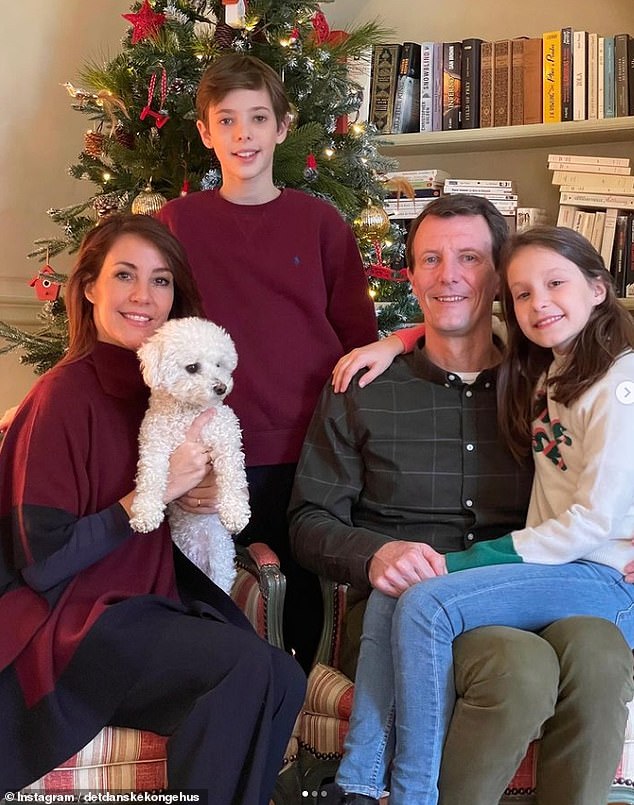 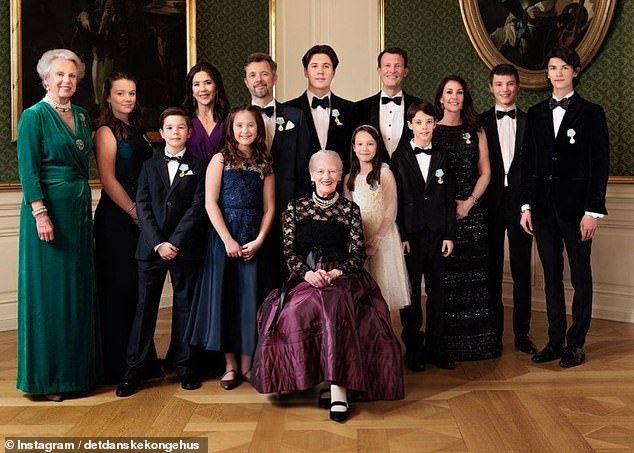 Joachim, Marie and their children marked the Queen Margrethe’s Golden Jubilee in January with the rest of the royal family

The teenage Princess is currently third in line to the Danish throne after her father and elder brother Christian.

‘Over the past 100 years, Fredensborg Castle Church has been used for several Ecclesiastes for members of the royal family.

‘Especially, the church has formed the framework for royal confirmations. Thus it was also in this church that both Her Majesty The Queen and His Royal Highness The Crown Prince were confirmed in 1955 and 1981 respectively and most recently His Royal Highness Prince Christian in 2021.’