State Liberal and Nationals MPs interested in understanding the party’s position 15 months out from the election may have missed the latest polling which appeared on the front of this newspaper on Thursday.

The results, which showed the Coalition has failed to make up any ground during the 18 months of the pandemic, were conveniently left out of Thursday’s news clippings sent to MPs each morning from the office of leader Michael O’Brien. 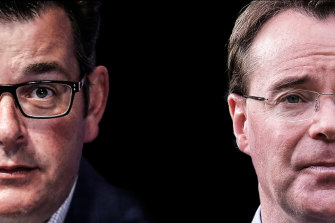 Given the Coalition’s woeful primary vote, it’s little wonder O’Brien didn’t want to provide his colleagues with more fuel to stoke the simmering leadership fire. But the omission had the opposite effect, only sparking increased interest in the results.

Industrious MPs who tracked down the data would have learnt that in the three years since the last election, the Coalition has failed to claw back any support in Victoria, with its primary vote stuck in an election-losing position of 35 per cent.

While it’s no surprise O’Brien didn't want to broadcast the findings, the raw numbers don’t tell the whole story.

While the Liberal vote hasn’t budged, support for the Andrews government is three percentage points lower than it was on election day in 2018.

The survey by Resolve Political Monitor suggests that while Labor is in an election-winning position, repeated lockdowns have taken a toll. Interviews conducted by Resolve exclusively for The Age and The Sydney Morning Herald asked Victorians not only how they would vote but probed the reasons behind their decisions.

People, even those who support the government, acknowledged Labor’s early mistakes in handling the pandemic, but were willing to stick with Labor even if they didn’t support Andrews.

“Considering the circumstances, I think Labor have done pretty well,” one randomly selected voter said. “They’ve done a good job – made some mistakes (some big ones) but they have learnt from them,” said another.

So far, the Coalition has been unable to capitalise on the slide against the government. Instead, these voters are “parking” their votes with independents, meaning both the major parties still have a chance to win them back before polling day. 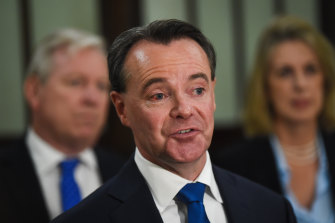 Then there is the incumbency factor.

The poll found Victorian voters have simultaneously drifted back to both the Andrews and Morrison governments in recent months.

Among Victorians, support for the federal Coalition increased from 35 to 39 per cent over the past month, while support for the Anthony Albanese’s Labor dropped from 40 to 33 per cent.

More partisan readers may find such a trend unfathomable, but it reflects a well-established tendency of voters to stick with governments in times of crisis. Even O’Brien’s internal enemies acknowledge this.

While none of this bodes well for O’Brien’s election chances, it is a trend that has seen governments of both stripes overwhelmingly returned to office in Tasmania, Queensland and Western Australia, and offers him an explanation.

The latest poll also shows that while support for the state government remains strong, Daniel Andrews himself remains a divisive figure in Victoria. This is also reflected in Labor’s internal party polling which suggests very high levels of satisfaction and dissatisfaction with Andrews. People love him and loathe him in equal measure.

Interestingly, the latest set of data did offer some fertile policy ground for the opposition to make inroads in coming months.

The survey found most Australians want state leaders, including Daniel Andrews, to stick to the national cabinet agreement to ease restrictions and open up when vaccination targets are met.

In Victoria 62 per cent backed that plan and only 24 per cent said Andrews should go his own way.

Given the rising COVID-19 caseload, Andrews has already shown some resistance to reopen once vaccination targets are met, suggesting case numbers need to be significantly suppressed at the same time.

During an online speech to the party’s faithful on Wednesday, O’Brien framed Andrews as “crab-walking away from agreed national cabinet targets”. The data shows this is a strategy which could work beyond grassroots membership.

Interestingly, that speech also gave some insight into O’Brien’s wider election pitch, revealing a shift to what he sees as the political middle. Defying his internal critics, the Opposition Leader acknowledged that to have any chance next November, the Coalition would need to chase the middle ground.

“At the election, we will be asking people who have voted Labor four elections out of the last five to vote Liberal Nationals,” he said.

“Remember that many of those former Liberal voters who voted Labor at the 2018 state election came back to our party just six months later at the 2019 federal election. These are the people who decide elections.”

He is right. And under his leadership, the Coalition hasn’t lost any support. So far, he has managed to keep the so-called base. He knows that any path to victory will be achieved by attracting voters from the centre, not by lurching further to the right.