How times have changed. It was not that long ago that Prime Minister Scott Morrison was adamant NSW Premier Gladys Berejiklian’s refusal to lock down Sydney despite a new outbreak was the right call. Mr Morrison told Sky News: “My fellow Sydneysiders can feel very confident that if anyone can get on top of this without shutting the city down, it is the NSW government.”

In economic terms, Mr Morrison’s logic was sound. Keeping COVID-19 at bay while keeping borders and businesses open is the best-case scenario. Globally, few cities or regions have managed such a feat. Sydney had led the way, and played a significant role in keeping Australia’s economy afloat. 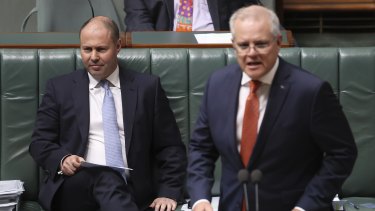 Treasurer Josh Frydenberg and Prime Minister Scott Morrison have both attacked Queensland and WA over the national plan to open up.Credit:Alex Ellinghausen

The passage of time has shown how misguided Ms Berejiklian was to delay locking down, but it has also highlighted the political shape-shifting going on.

If you live in Perth or Brisbane today, going to the office, a restaurant or to a show is not unusual. Students are going to school. Life is relatively free of restrictions. Their economies are humming. Based on Mr Morrison’s previous stance towards NSW, you would think this would get the Prime Minister’s stamp of approval given their success.

There is a big difference, of course. Western Australia has achieved its feat by shutting its border to the rest of the country. The national cabinet – which includes the Prime Minister as well as all state and territory leaders – has outlined a plan to ease restrictions once vaccination rate targets of 70 and 80 per cent are met, but West Australian Premier Mark McGowan and Queensland’s Annastacia Palaszczuk have since distanced themselves from those thresholds.

There is too much politicking on this and some odd logic. On Thursday, Treasurer Josh Frydenberg repeated his comment that “if the borders remain shut and if all states don’t follow the plan, jobs will be lost, businesses will close, the wellbeing of Australians will suffer, our debt burden will increase and our recovery will be slowed”. It’s a strange argument to make against states that, by keeping COVID-19 out, are keeping people in jobs and businesses open, and are not requiring financial assistance from Canberra, which would further inflate the debt.

But there is a bigger reality that all Australians, wherever they live, are having to face. At some point, states such as Western Australia and Queensland will have to open their borders and that will almost certainly mean COVID-19 will enter. Do we accept that, or refuse to acknowledge the inevitable? Do we accept, too, the Doherty Institute modelling that found that if 70 and then 80 per cent of eligible Australians are fully vaccinated we can indeed “live with COVID” because the severity of illness will be so much less?

The Age has some sympathy for Queenslanders and West Australians, but it did not help this week when Ms Palaszczuk threw up a red herring by linking a possible delay to border openings with the safety of children. While no vaccine has been approved for children aged up to 11, the virus has shown itself to be far less deadly in younger people. As well, health experts have warned against panic about children being exposed to it. The increased percentages of children being infected are purely because older Australians are now more likely to have been vaccinated.

The impact of the virus on children was part of modelling by the Doherty Institute presented to national cabinet that included sections on the low rate of infections among children compared with older age groups.

If we stick to the evidence as best we know it, avoid partisan squabbling and get vaccinated as quickly as possible, we have a reasonable chance of emerging from this pandemic to resume some semblance of normal life.