A Melbourne policeman is being investigated over allegations he shared footage and information with his friends about pulling over one of their ex-girlfriends for speeding.

Screenshots of Facebook messages appear to show the policeman boasting: "Show me love 'cause I booked [name redacted] yesterday."

One of his friends replied: "Hahahah f— that’s gold," and another asked if the woman recognised the officer. 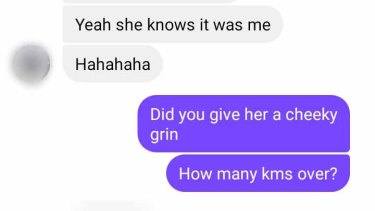 A screenshot of an alleged message between the officer and his friends.

"She didn’t realise at first. Then I’m like, 'Didn’t expect to see you like this [named redacted],' haha," the officer replied, sharing dash-cam footage from the police car showing the rear of the woman's vehicle after he pulled her over.

The constable then messaged "got your back bro" to the woman's former partner.

The woman's lawyers said privacy breaches such as this undermined the public’s confidence in the police force, referring to the notorious example of former AFL coach Dean Laidley, whose arrest photo was sent by an officer to friends before it was leaked and shared widely on social media. 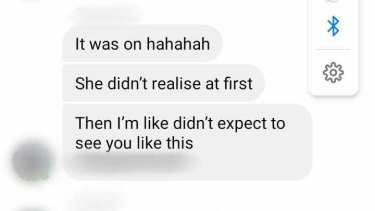 Screenshots of the alleged exchange.

Victoria Police confirmed an internal investigation was under way, saying the force had no tolerance for poor behaviour in its ranks.

The woman, aged in her early 20s, was pulled over in April for driving more than 20km/h over an 80km/h speed limit on the Princes Highway near Officer.

She said she recognised the officer as a friend of her former partner, but did not think much of it until about a week later.

By coincidence, the officer came to her home when police were called to respond to a family violence incident involving another ex-boyfriend.

The woman, who did not want to be identified because of the family violence, said her phone had been smashed in the incident so she used an old phone that she said was still logged in to the Facebook account of her former partner who was friends with the policeman.

"I turned on the phone and I was getting all these notifications," she said.

She discovered the messages about her, and while the officer appeared not to disclose her family violence incident, she said she was worried that if he had shared the information about her speeding fine, he could tell mutual acquaintances about the other incident.

"Not only is it humiliating and embarrassing that he knows what’s going on – I don’t talk about it to anyone – to know that he’s laughing. I was so upset," she said.

She confronted the policeman in text messages and he appeared to admit he told his friends he booked her for speeding, and he apologised. But he said he did not tell them about the family violence. 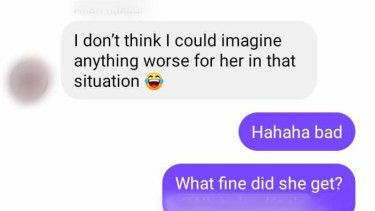 A screenshot of the messages the woman alleges she found on an old phone.

Messages between his friends then show the officer asking if anyone had shared the dash-cam footage.

The woman lodged a complaint with the Independent Broad-based Anti-corruption Commission, which forwarded the complaint to Victoria Police to investigate.

She has now obtained legal representation, with her lawyer, Jeremy King, saying his client planned to launch civil action on the basis of malfeasance in public office.

"This case, in conjunction with the Dean Laidley matter, have raised further concerns about breaches of confidentiality by police," Mr King said. "You have to wonder how often this type of information is being shared by police officers for their own amusement?"

At least 13 police officers and support staff were suspended or transferred after photos of Mr Laidley, who was arrested over stalking allegations, were leaked.

Victoria Police said Professional Standards Command was investigating the new privacy breach allegations made by the woman, and the constable, who is said to be remorseful, had been transferred to other duties.

"Victoria Police has no tolerance for poor behaviour within its ranks,” a spokesperson said.

"We are here to protect the community and want people to have absolute confidence in their dealings with police."

The spokesperson said if any improper behaviour was identified, it would be thoroughly investigated and police involved would be held to account.

The most important news, analysis and insights delivered to your inbox at the start and end of each day. Sign up here.