During her segment on Sky News on Wednesday night, Credlin also said she was collecting evidence for the review being carried out by Sex Discrimination Commissioner Kate Jenkins into Parliament’s workplace culture. 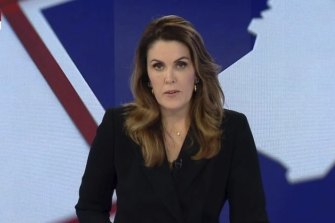 Peta Credlin said on Sky News that she had sacked the Coalition staffer featured in a video performing a lewd act on the desk of a federal MP. Credit:Sky News

Credlin said on Sky News that, years earlier, she had dismissed the staffer for disloyalty and leaking against his boss.

Credlin, who served as chief of staff to former prime minister Tony Abbott, said that after terminating the staffer’s employment, the man backgrounded journalists against her. She alleged that the man called her a “bitch” and said that she was “too tough”.

“That bloke I demanded to be sacked years earlier for disloyalty, for lying, for leaking against his boss,” she said.

“I sacked him and I said he would never be back while I worked in that building.”

The staffer was rehired when Malcolm Turnbull became prime minister, she said, only to be dismissed this week following the publication of the lewd videos.

“The bloke I sacked came back and dozens more like him. Mid-career women, women of ability, lost out in roles to well-connected factional twenty-somethings with not much on their CV of note other than the ability to stack branches,” Credlin said.

“Much of the current mess on the ministerial blue carpet for the Coalition is a legacy from the Turnbull years.

“These are my first comments on incidents in the past. They will not be my last.”

Credlin said she would be “getting out every file note, every document, every bit of paper … I’ll do my best to drive change” in relation to Ms Jenkins’ review.

She sent a message to the three other men in the video, saying: “I know who you are. I see you”.

“The former minister who it is alleged had his male prostitutes delivered to Parliament House by this spiteful gang – signed in and all kept quiet – former minister I see you too,” Credlin added.

She said that while she had never had to deal with an allegation of rape during her time working for Mr Abbott, she would have dealt with it very differently to the way Prime Minister Scott Morrison had handled the issue.

Quotas not the answer

She said that in the case of Brittany Higgins, three women – cabinet ministers Linda Reynolds and Michaelia Cash and Senator Reynolds’ chief of staff Fiona Brown – all “mishandled” the case despite all being female.

“I’m not so sure what they could have done here to improve things,” she said

“Of course I want to see more women in public life but I want them to advance on merit, not gender.”