Christmas parcel deliveries no longer face the threat of strikes after Australia Post’s package shipment business and the transport union resolved an almost year-long dispute over pay and conditions.

The three-year agreement between StarTrack and the Transport Workers Union paves the way for a formal vote by the company’s workers to approve the deal and ends an at-times caustic period of negotiations that saw Communications Minister Paul Fletcher lash union “thuggery”. 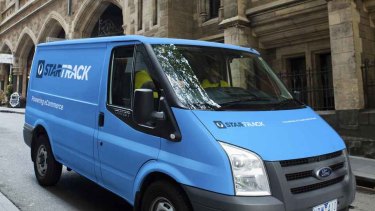 The union representing StarTrack workers has done a deal with the postal company.

It means the only major transport company still holding out against the union’s coordinated campaign of negotiations for new pay deals is the multinational delivery firm FedEx after Toll, Linfox and others made union agreements.

For shoppers, the decision of StarTrack and the union to bury the hatchet means there is one fewer obstacle to online orders arriving in time, though industrial action on Australia’s wharves still looms as a threat alongside supply chain problems globally.

“Settling a fair deal is the early Christmas present StarTrack workers deserve,” said Transport Workers Union national secretary Michael Kaine. “It’s a relief for workers that their job security will be locked in, and they’ll be given fair recognition for slogging it out in depots and in vans during COVID.”

The union said the deal included 3 per cent annual pay rises, with one backdated to September and two more to come, on typical wages between $62,000 and $72,000. That is the same as other Australia Post workers won in a much less contentious deal that their unions and the service signed earlier this year.

However, the transport union also claimed it had won job security protections such as a rule requiring work for existing employees before contracting out and a provision to pay labour hire staff the same as workers directly employed by StarTrack.

Neither side provided the text of the agreement, which is not yet fully drafted, to The Sydney Morning Herald and The Age. Agreements already have a rule requiring labour freight handling workers to be paid the same as regular staff, which is a tool unions use to improve pay for those workers and reduces the financial incentive for companies to outsource.

“Our focus has always been to keep our people safe, deliver for our customers and the community, and create a sustainable future, and we have worked hard to deliver an agreement that provides enhanced job security and an industry-leading wage offer,” said StarTrack spokeswoman Michelle Skehan.

The transport union counts about 2000 members at StarTrack. Mr Kaine, said he was glad the company had reached an agreement.

“We hope this agreement signals a new era of co-operation with StarTrack workers moving forward, which has been missing from the company for some time,” he said.

Mr Fletcher had lashed the TWU’s campaign, saying it was “unconscionable” during the pandemic not to deliver important goods.

Throughout the dispute, Mr Kaine vehemently rejected claims from Mr Fletcher and others, defending the union’s actions as a crucial fight for members’ job security and pointing to the union’s decision to delay its national campaign because of COVID-19 as evidence of its responsibility.