It’s considered a taboo subject: parents who regret having children.

In the Sunday Life article Having a kid is probably my biggest life regret: ‘Wife concurs’, freelance writer Phil Brandel spoke to several parents who feel that way and were willing to admit it. 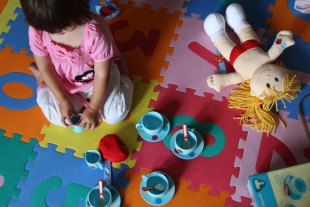 Writer Phil Brandel says it’s an important conversation to have so parents who are struggling can feel supported to ask for help.Credit:Peter Braig

Tracey*, a 32-year-old single mum to a 14-year-old, told Brandel that if she had her time over she wouldn’t have had a child. She said while she feels a bond with her son and certainly doesn’t hate him, she doesn’t enjoy raising a child.

James*, a 47-year-old advertising professional who never wanted kids, said he felt pressured by his then girlfriend – and his family and society – to become a father.

“So we had a little girl and then we separated and now I have her 50/50 with my ex. I feel like my old life stopped when she was born, and I miss it.”

Some readers found these feelings impossible to comprehend or empathise with.

bwana kijana: “What a tragic article. Yes, kids are hard work, and they take over your life. They also teach you how to truly value someone else’s needs above your own. An extraordinary gift that pays back many times over the years ahead, if you accept it in the right spirit.”

SS: “I remember asking a work colleague about this 25 years ago and he said that he loved his kids but if he’d had the chance to go back he wouldn’t have had them. I have since had two kids and still find myself having difficulty grappling with what he said and what I read people saying in this article. For me, raising kids is the hardest thing you will ever do, but also the best thing you will ever do.”

BB: “I found this quite shocking to be honest. I didn’t realise so many people felt this way. I’m afraid I can’t empathise at all — yes, the early years were hard sometimes, but I mourn for them. I look at old photos and videos and wish I could freeze time.”

The Trojan: “Being a parent is hard, sure. But saying you ‘regret’ it means you’d trade them back in … I just cannot imagine someone even thinking that way. Poor bloody kids.”

The parents were criticised for being immature and selfish. Some readers said the regrets were symbolic of the “Me generation”, while others dismissed them as “First World problems”.

Some readers, however, said the parents were courageous for speaking out, and praised the article for tackling the topic. They also raised the different societal and financial pressures today’s new parents face compared to previous generations.

The Real Sydneysider: “Good to see people talking frankly about this issue, because it’s been pushed under the carpet for too long. The main memory I have of raising children is constant worry and exhaustion. That feeling is still with me even though they are in their 20s and 30s.”

Redfox: “This has got to be one of the most honest articles I’ve ever read. I’ve never wanted children, it’s just not me. Glad I didn’t fall into the trap. I feel for the people in this article.”

Curlicued Mango Huh: “People now work longer hours and more days each week and are more stressed and have less family time as a result. Families today need two wage earners to get by, not one. To get well-paid work more have to leave their home and extended family for a larger city. Basically, modern life has become far less conducive to having and supporting children.”

rhubarbfriand: “I don’t regret having my child but I do have empathy for people who feel they can’t cope. Without support it’s incredibly hard with your own needs almost always coming after kids and work. I wonder what options there are to support young families better through the tough first five years.”

Bunny69: “It is considered taboo to not want to have children. And society has looked pitifully on those who grow old without children. It is condescending and uncalled for.”

RnR: “Well, if you feel like this … I feel for you. And want to put my hand up and say I am at least one person in the world who would not judge you for regretting having children. Hopefully there are many more.”

Truly: “And then there’s the mummy club. Women without children are automatically excluded. It’s irrelevant whether the childlessness is chosen or because of inability to conceive. You’re automatically not quite woman enough.”

Brandel believes it’s important to talk about the issue because some people do feel pressure about having kids when they don’t really want them.

“But everybody says ‘you will feel different when they are your own’ or ‘You will never feel love like it’. Sure those comments may be true for some, but is that enough of a reason to do something you don’t really want to do?”

He says by having this conversation “we are saying ‘it’s OK to feel regret’ but that it’s also OK to say ‘no, I don’t want to have children’ without people thinking you’re selfish”.

“We need to remove the stigma and taboo, so that people can open up and say ‘I’m struggling, I need help’,” Brandel says.

The article prompted some readers to share their regrets.

Jittery: “Do I regret having children? So far, no. I regret not doing more with my life before – travelling more, going for long bushwalks, girls’ weekends away, relaxed visits to a winery … you get the picture! I feel limited in who I can have a whinge to about my challenges as a mum, lest I be judged. I sympathise with those who regret having kids who feel like they can’t confide in anyone. Good to know there’s forums out there for that.”

Sandman: “Some 27 years ago on a 12-month overseas holiday from work, we were traipsing around the Greek islands and my wife asked me how sure I was about living a life without kids. Aged 42, I replied: 100 per cent! Look at us travelling around without a worry in the world. I asked her the same question. 90 per cent was the reply. Two years later we had our first of two. 25 years on, I’d not do it again.”

DK: “This is still a taboo topic. I love my kids but as a woman have given up so much for them. I had no real idea of what it would mean to have them. But being a mother is one way of divesting yourself of a financially secure future and a lousy career path.”

Phil66: “I’ve only got one, and regret that I didn’t try harder for a second. Every year is better than the one before, I love watching this little person develop before my eyes. Toddlers are hard work and I would imagine that many of the regrets these people feel will pass.”

sdkane: “The last time I was happy was January 2000. I love my kids, but being a parent was the dumbest thing I have done. My partner wanted them (two … and more), but was never there to discipline and wants a perpetual umbilical cord. Now, as they are adults and still here, is 10 times worse, and our relationship is rubbish … and for what?”

DG: “I have an 18-month-old, never wanted kids, it just happened. I still say I don’t want kids, I love mine, but I still wish I could turn back time and not be in this position. I’m sick of people who say it’s the best thing ever, it’s a blessing blah blah blah … maybe to some, but not all, stop putting your agenda on other people.”

Online readers of The Sydney Morning Herald and The Age made 55,058 comments on 587 stories in the past week.

Most-read by subscribers in the past week

Most Viewed in Lifestyle