A sea of colour has swept across wide swathes of the Blue Mountains just a year on from the huge bushfires as long-dormant pink flannel flowers spring to life.

The flowers, known as bushfire ephemerals because their seeds only germinate after fire, are blooming in formerly burnt landscapes from Katoomba to Lithgow and north to Newnes. 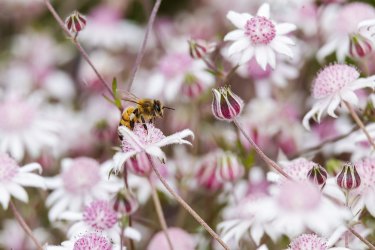 Lots to choose from: A bee lands on a pink flannel flower (Actinotus forsythii) near the Golden Stairs lookout in the Blue Mountains.Credit:Brook Mitchell/Getty

“There’s a mass synchronicity of flowering,” Mark Ooi, a senior research fellow at the University of NSW’s Centre for Ecosystem Science, said. “The pink flannel flowers provide this beautiful contrast” against a backdrop of burnt-out regions from the 2019-20 blazes, he said.

The flower, Actinotus forsythii, is not so much endangered as rarely seen except by those who frequent scorched earth. “You might only see them once or twice in your lifetime,” Dr Ooi said.

The flowers will only last for a few months before they disappear, waiting for the next bushfire to trigger their germination. Similar fire-ephemeral species can be found in Western Australia but also other Mediterranean-type climates such as California and South Africa.

Interestingly, it seems the flowers respond to bushfire smoke to germinate rather than heat.

Tests conducted by Dr Ooi and colleagues to determine how best to cultivate such flowers found the species has “a strong germination requirement for smoke … but no response to heat shock”. 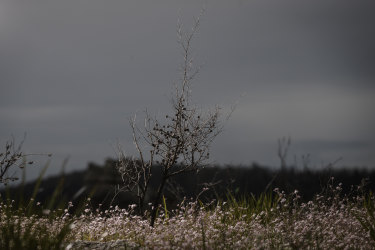 “Dark treatments also had a very strong inhibiting effect on germination, suggesting that seeds need to be near the surface where light can reach to ensure germination,” the researchers wrote in a paper published in the Australasian Plant Conservation journal last year.

Photographs are turning up of the pink flannels in full bloom on citizen science sites, such as those run by the Bushfire Recovery Project at UNSW. Walkers aged in their 80s are among those out collecting seeds, Dr Ooi said.

Researchers are aiming to find out more about the species, including how long their seeds can remain between fire events in a “deep dormancy” before germination.

The smoke-derived chemical karrikinolide is the active ingredient to trigger the plant’s emergence. The lab tests involved creating so-called smoke water infused with the chemical to prompt the germination.

Pink flannel flowers amid burnt trees near the Golden Stairs lookout in the Blue Mountains.Credit:Brook Mitchell/Getty

Other plants with a similar activation after bushfires include grasstrees, or Xanthorrhoea, that send up flowering spears, and Gymea lilies.

While the Sydney basin is home to some 2500 plant species, Western Australia boasts about three times that number.

“They seem to have a lot more fire ephemerals over there,” Dr Ooi said. “We have a few, which is why [the current flowering] is so special.” 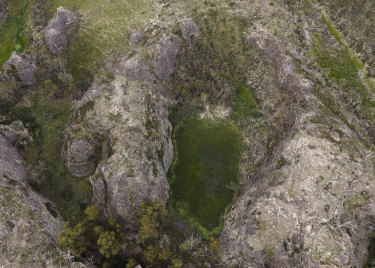 An aerial view of Gooch’s Crater near the Gardens of Stone National Park, with larges patches of pink flannel flowers on display.Credit:Brook Mitchell/Getty

Catch all the day’s breaking news