Premier Gladys Berejiklian has warned that if the number of new COVID-19 cases do not start dropping, NSW will have to introduce tighter lockdown measures.

NSW Chief Health Officer Kerry Chant said there are now 1219 cases in NSW, an increase of 190 new cases since the last update. Dr Chant said she expected numbers to increase as more people arrive back from overseas. 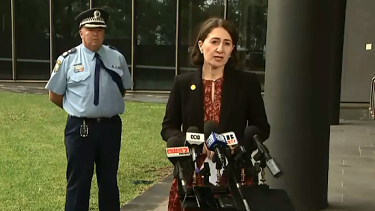 Ms Berejiklian said there are "potentially thousands of people" stranded on ships.

"I do not want a single person to come off a ship, and we have police at our ports this morning, until official protocols are signed," Ms Berejiklian said.

She said she wanted far tighter protocols that went "over and beyond" what currently exists.

She said state and federal governments had to be "in complete agreement" before anyone would be allowed to disembark.

"The position we land on will mean that the state and federal authorities will be in complete lockstep," Ms Berejiklian said.

"We are going to take a very hardline approach in NSW … but we need to really make sure there is no amount of daylight between where the states and federal authorities lie."

The main criteria that health experts are looking at as a "tipping point" for tougher lockdown measures is the level of community transmission of the virus," Ms Berejiklian said.

She said that the state was working "around the clock" to make sure the health system had all the protective equipment needed if the number of cases rise.

Ms Berejiklian said national cabinet had been looking at measurers to help renters and NSW Treasurer Dominic Perrottet was working on measures to protect tenants, which he could unveil as early as today.

Ms Berejiklian said it was promising that NSW had seen a small reduction in the number of cases overnight and it was even more "promising that very few people had died."

But she said it did not mean the state was out of a "critical" situation.

"We say to everyone please take this seriously, we don't want to use police but we will," Ms Berejiklian said.