Mr Turnbull, who introduced the laws in 2017, said he did not intend for the Foreign Influence Transparency Scheme to be used as widely as it has been after he registered himself for speaking at a South Korean-backed forum that was broadcast to the public. 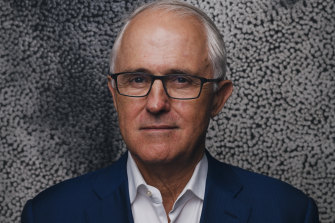 Malcolm Turnbull says the laws need to be reviewed but has urged caution.Credit:James Brickwood

The Parliamentary Joint Committee on Intelligence and Security (PJCIS) will begin its statutory review of the scheme within weeks, and will consider whether to better target the laws to capture more harmful activity by countries such as China and Russia.

Mr Turnbull urged caution in any move to overhaul the scheme, saying the national security laws could be made “non-agnostic” but it would risk failing to capture seemingly friendly countries that secretly meddle in Australia’s affairs.

“We need to have a look at it and just ask whether it is achieving the purpose of greater transparency,” Mr Turnbull said. “Are there arrangements that should be disclosed not on the register? And if so, why? Equally, we should ask whether the legislation’s objective can be achieved with a lighter, simpler regulatory burden.”

The foreign influence scheme, which came into effect in 2018, is intended to capture the lawful activities of entities that seek to exert influence in Australia on behalf of foreign powers, and registering is not an admission of any kind of nefarious activity.

The Sydney Morning Herald and The Age can reveal former prime minister Kevin Rudd’s correspondence to the Attorney-General’s Department last month led to officials asking Mr Turnbull and Gareth Evans to register as potential agents of foreign influence for their participation in the Jeju Forum for Peace and Prosperity. Based on legal advice, Mr Rudd has taken an extremely cautious approach by registering 58 activities and connections including interviews with British public broadcaster the BBC.

Mr Turnbull said the capturing of former cabinet ministers and prime ministers’ speeches at public events “was not intended or contemplated” when he unveiled the legislation in 2018, while Mr Rudd’s register of interviews with the BBC was also “not in my mind” when conceiving of the laws.

He also said the online registration form was “very clunky” and if the government wanted people to register “it has to be a very simple form”.

Mr Turnbull’s former adviser Daniel Ward, one of the architects of the scheme, has called for the scheme to be overhauled by scrapping its “country agnostic” approach. This would involve moving to a “tiered model” in which the conduct of higher-risk countries would be subject to greater regulation than activity from other nations.

Mr Turnbull said his former advisor “makes some powerful points”, but having a “blacklist” could be difficult to administer. He instead suggested creating a “white list” that would include the countries making up the Five Eyes intelligence-sharing arrangement of the United States, Canada, Britain and New Zealand.

“There are countries that generally we would regard as friendly, but are still not above indulging in espionage and meddling,” Mr Turnbull said.

“For me, if I was on the PJCIS I would be wanting to listen very carefully to arguments about country agnosticism and just consider whether the burden of disclosing arrangements connected to, say, the United Kingdom or the United States, is really so great as to warrant making a change.

“The minute you start a non-agnostic approach then whoever is not on the white list would want to be on it.” 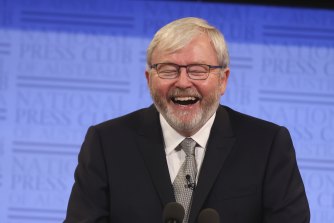 Former prime minister Kevin Rudd has taken a cautious approach, with one of his registrations catching up Malcolm Turnbull and Gareth Evans.Credit:Alex Ellinghausen

In a letter to the A-G’s Department last month, Mr Rudd declared that he addressed the Jeju Forum and pointed out in the last sentence that Mr Turnbull and Professor Evans also had connections to the same event.

Mr Turnbull followed by registering under the scheme but Professor Evans, foreign minister in the Hawke and Keating governments, dismissed the official request as a “joke” in his response on July 20.

Professor Evans told The Sydney Morning Herald and The Age that the legislation was “totally misconceived, beyond redemption and should be scrapped in its entirety”. He said the country’s foreign espionage laws were strong enough to respond to covert attempts to meddle in Australia’s affairs, and overt activities were usually obvious and manageable.

“The basic bottom line is our democracy is robust enough to cope with overt exercises of attempts to influence government actions,” he said.