A tsunami-sized wave of opposition to Netflix’s docu-series Byron Baes really is the coastal disaster the US-owned streaming service never saw coming. But after plunging an already substantial investment into the series – which Netflix’s local director of content, former ABC exec Que Minh Luu dubbed a “no brainer” – the streaming giant is showing no signs of backing away.

Executives including Netflix’s director of public policy Nick O’Donnell flew to Byron Bay on the NSW north coast last week for crisis talks with local stakeholders. O’Donnell had the task of meeting Byron Shire mayor Simon Richardson, who doesn’t have the power to stop the filming of the production but has made no secret of his disapproval. “It’s quite offensive,” he told one outlet. 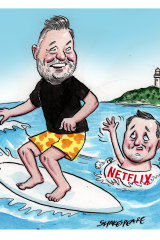 Also on the itinerary? Ballina Shire Mayor David Wright, who seems marginally more supportive of the production given filming of Netflix’s big budget workplace comedy God’s Favourite Idiot starring Melissa McCarthy is under way in his shire. Netflix declined to comment on the outcome of the meetings. Those familiar with the conversations said the streaming service was keen to emphasise Byron Baes′ production vision focused on locals and entrepreneurs rather than the influencer crowd. “They’re not bikini babes,” a source said of the casting decisions. We shall wait and see.

Opening night elephant in the room

Among the attendees on Thursday were former premier Steve Bracks and wife Terry Bracks, University of Melbourne Vice Chancellor and Cambridge importee Professor Duncan Maskell, former investment banker and philanthropist Jane Hansen, the MTC chair, whose handbag for the evening was her husband Paul Little.

Actor Michala Banas turned up to see the results of her handiwork (she is the production’s “intimacy co-ordinator”). Also present were chief executive of the Committee for Melbourne Martine Letts and former MTC chair Terry Moran.

Anyone get the feeling that George Pell’s Prison Journals isn’t wholeheartedly embraced by online bookshop Booktopia?

It might be the only book by a local author for which Booktopia doesn’t have any signed copies in stock. And despite it being released in December, the Aussie website still says the cover is “coming soon” and it takes 10 to 15 days to ship, rather than the standard 1 – 2 days.

The book is the account of the trials of the 78-year-old who was sentenced to six years in jail after a jury found him guilty of sex abuse charges. The verdict was upheld by the court of appeal, but the High Court voted 7 – 0 to overturn his conviction. Cardinal Pell was released a year ago after more than 13 months in solitary.

The blurb sets the tone: “His victory over injustice was not just personal, but one for the entire Catholic Church. Bearing no ill will toward his accusers, judges, prison workers, journalists, and those harbouring and expressing hatred for him, the cardinal used his time in prison as a kind of extended retreat.”

Up to a point, Your Eminence. Cardinal Pell is pretty blunt when discussing the Victorian Court of Appeal judges who upheld his initial guilty verdict. “I spent some hours this afternoon reading the combined hostile judgment of Maxwell and Ferguson. It is a clumsy rerun of the prosecution case. The complainant is judged to be ‘credible’ and everything he says is evaluated in his light. When he is making some bizarre claim, that is judged as evidence of his truthfulness because no liar would be so silly.

“I find it hard to believe two senior judges could be so mistaken.”

Meanwhile it’s a little odd to find Prison Journals part of a promotional campaign from an unexpected source – Qantas. The airline is a prominent supporter of gay and lesbian issues, particularly around the 2017 same sex marriage debate, which Pell vociferously opposed. Nevertheless, Qantas is happy to offer 70 Qantas Frequent Flyer points for those who purchase the tome from Booktopia.

That is more points than the promotion offers for critical books about Pell including Louise Milligan’s Cardinal (56 points), Lucie Morris Marr’s Fallen (47 points), David Marr’s The Prince (33 points). Has anyone told Alan Joyce?

A Qantas spokesman says its deal with Booktopia covers 6 million books on the online shop and the airline is also giving away Frequent Flyer bonus points for titles such as Richard Branson‘s Losing my Virginity (49 points) and the book The Men who Killed Qantas (40 points). That’s got to hurt.