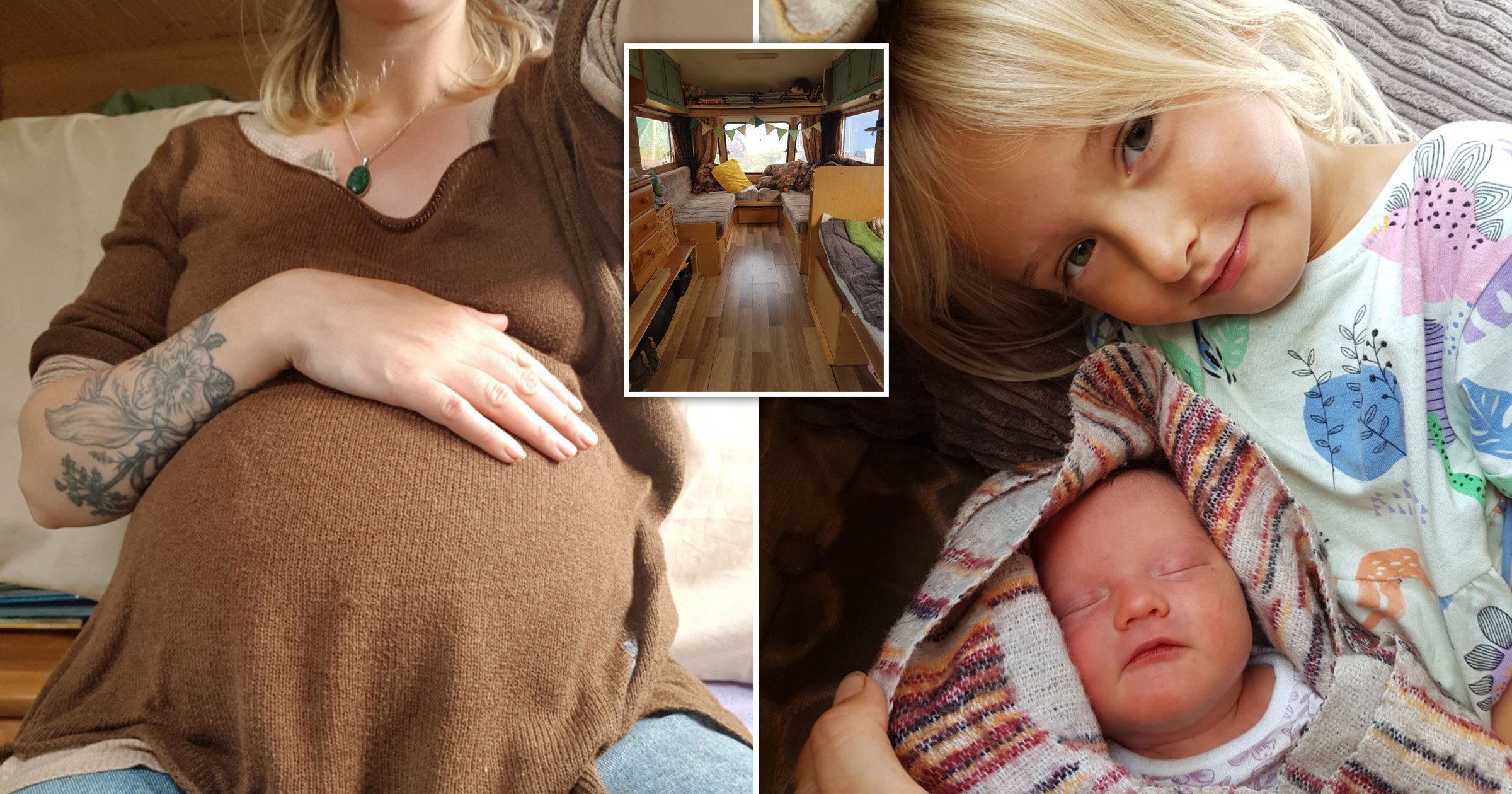 A mum-of-three has shared how she freebirthed her third baby in her camper van without any medical help.

Six weeks ago Chloe Patchett, 32, from Cornwall, welcomed her daughter, Romilly in an unorthodox manner.

Both children were born in caravans that the family were living in at the time.

‘Freebirthing is taking back responsibility for your health and education, as well as becoming more aware of how to look after yourself and your body,’ Chloe said.

‘It’s a different perspective on giving birth. It’s not seen as a medical event. It’s a natural process and you don’t need doctors to be there.

‘I’d heard about freebirthing online, through a few books and my friend had also freebirthed her child. So when I fell pregnant for the first time with my daughter, Ona, I felt inspired and it felt right for me to do it this way.

‘I’d heard so many horror stories about giving birth in a hospital, it just didn’t seem natural.’

While confident in her decision, friends and family did voice their concerns about her choice – but she promised them she would ring an ambulance if anything went wrong.

‘After a successful birth the first time, people had more trust in me the second and third time around and didn’t think I was being crazy or reckless,’ she noted.

Despite freebirthing with all of her children, each were welcomed into the world in different locations.

‘My most recent pregnancy and freebirthing experience went well,’ Chloe said. ‘I didn’t have any scans, I just trusted my body to grow my baby.

‘I didn’t have to prepare at all for the birth.

‘My partner, Carl, was our other camper van with the kids, and they slept through the entire thing.

[I rang when the baby had arrived. Giving birth is a private and intimate experience. I think that being observed during this would be off-putting for me.

‘I would of course be fine with my partner being there as he had been for our first two children, but being alone meant there were no distractions and I could get into the zone.

‘It took around two and a half hours to welcome Romilly into the world.’

After birthing the placenta, Chloe then buried it in her garden.

‘Not having anyone involved means there isn’t anyone there to disrespect your wishes for your birth,’ she explained.

‘It’s also a positive experience for the baby as they are welcomed into a calm and peaceful environment.

‘All of my babies have been born really alert and crying. I immediately place them on my skin and then breastfeed them straight away.

‘It’s a beautiful experience. It’s an intuitive experience instead of needing someone external to monitor and control it.

‘I was able to connect with my body and baby and allow the natural process to occur on its own and to surrender to the process.

‘There is no need for humans to have control over something that should happen naturally.’