Mother left trapped in India with her daughter, six, reveals they were spat on and branded ‘coronavirus foreigners’ as they undertook a 600-mile road trip to escape home to the UK

A mother has told how she was spat on and shouted at before a nerve-racking 600-mile taxi journey to escape from lockdown India.

Thousands of Britons have been left stranded after flights were grounded in India’s nationwide Covid-19 curfew.

Dawn Hardwick, 50, from Leamington Spa, who was travelling with six-year-old daughter, Rosie, managed to flee on a rescue mission arranged by German authorities after finding the doors of the British High Commission in New Delhi closed.

‘The UK response to this crisis has been disgusting,’ she explained. ‘I was told to help myself when I spoke to the British High Commission, and when I called again they put the phone down on me. 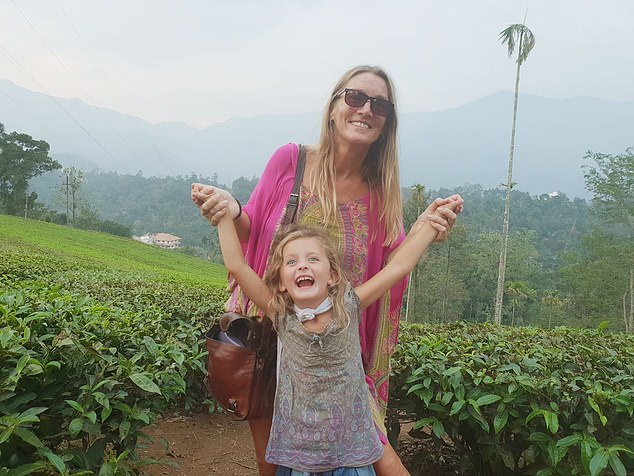 Dawn Hardwick, 50, from Leamington Spa, and her daughter Rosie, six, are frequent visitors to India. Pictured, on a previous trip visiting Munnar 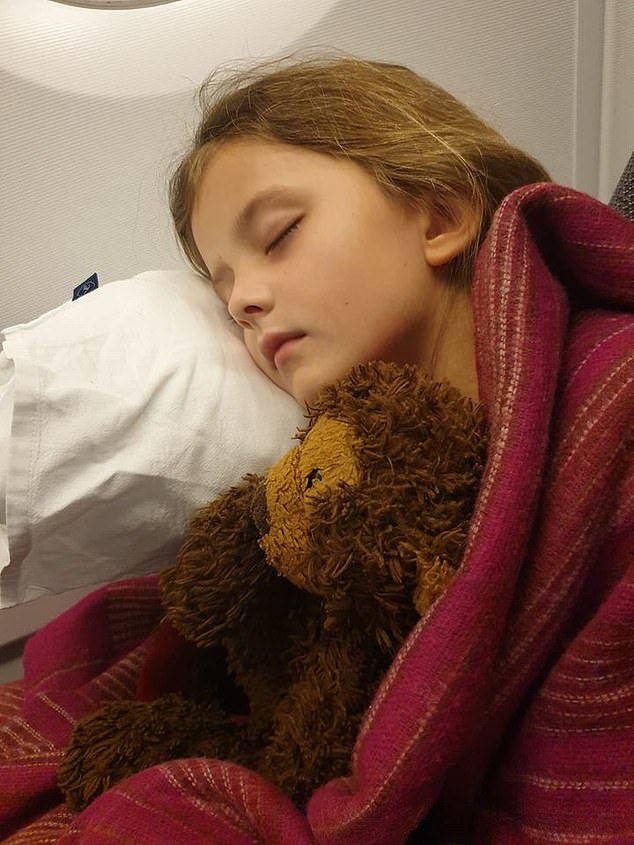 The pair managed to flee on a rescue mission arranged by German authorities after finding the doors of the British High Commission in New Delhi closed. Pictured, Rosie sleeps on a Lufthansa flight rescuing stranded foreigners from lockdown India

‘I was scared, single mum travelling with a child, and I’d still be there now if it hadn’t been for the German Embassy.’

Dawn and Rosie were exploring the town of Jaisalmer, close to the border with Pakistan, when India’s lockdown was announced last on Tuesday last week.

She says the mood quickly turned sour as suspicion fell on foreigners for bringing in the virus.

‘The atmosphere changed in a heartbeat,’ she explained. ‘I’ve been travelling back and forth to India for years and have always felt incredibly welcome.

‘But I for the first time, I really didn’t. I had people shouting in my face, calling us “coronavirus foreigners”. One guy spat at us.

‘It was intimidating and scary but I had to play it down for Rosie’s sake. I laughed it off and told her they were just being silly.

‘We dashed back to our accommodation and I knew we had to get out of Jaisalmer as things felt so tense.’ 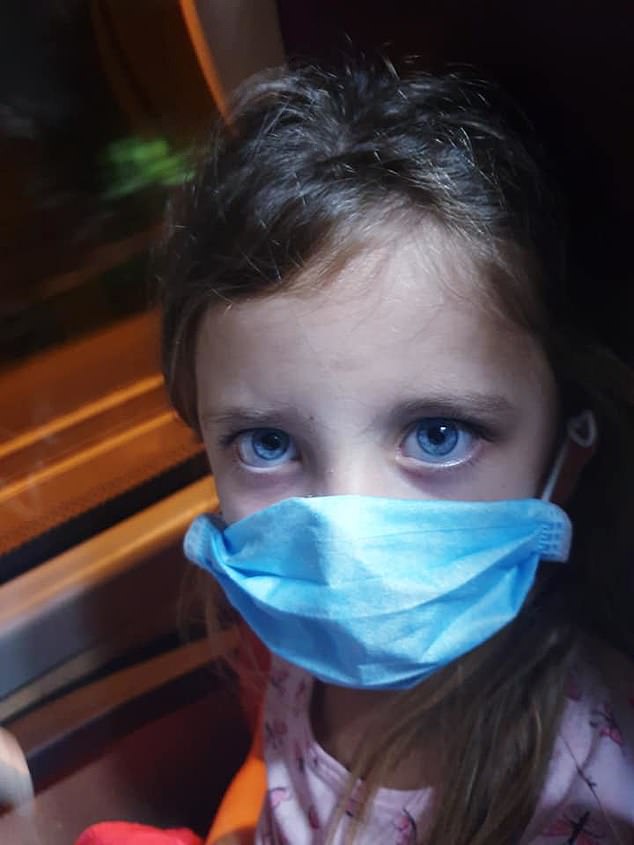 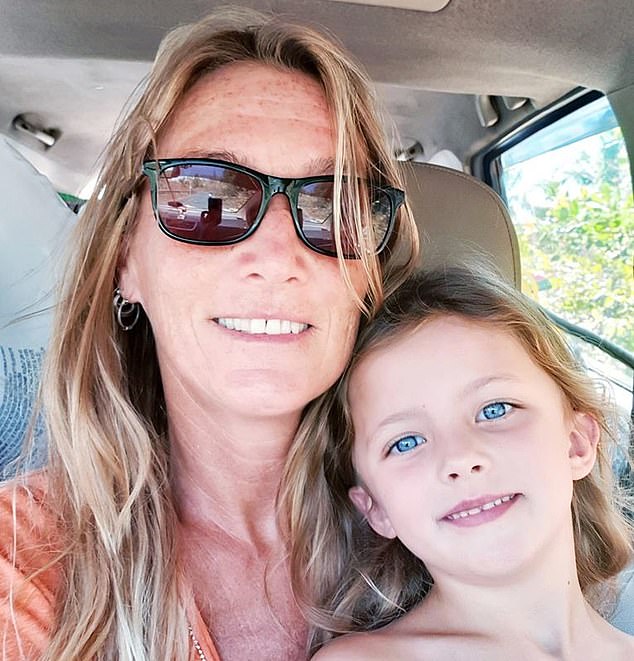 Dawn found a driver to take them to Jodhpur, a five-hour road trip.

‘I found a place to stay but as we walked into reception we sprayed head to toe with sanitiser,’ she said. ‘Then we were ordered to stay confined in our room until our onward taxi the next morning.’

After another five hour drive, Dawn and Rosie arrived in Pushkar. Dawn hoped to arrange flights to Delhi to catch a plane home, but learned domestic jets had been cancelled in the lockdown.

‘Rosie fell asleep and I stood on the balcony and cried over a cup of tea,’ she recalled. ‘I just didn’t feel safe. Things were going from bad to worse.

‘The British High Commission were useless and in the end they wouldn’t even answer the phone to me.

‘In desperation I called the local police station and managed to get a permit that would allow us to travel by road.’

Dawn and Rosie endured a nine-hour taxi drive to take them to Delhi.

‘It was surreal,’ she said. ‘There were hardly any vehicles – just a few military vehicles. Police jeeps and food trucks – and the roads were full of monkeys and cows.

‘I lost count of the number of road blocks and every time we hit one I expected to be turned back.

‘Police were beating people who had disobeyed the curfew with long sticks. I had to keep Rosie hunkered down in the back so she didn’t witness any of it.’

In Delhi, Dawn says the British High Commission was closed and found the airport full of foreigners desperate to return home.

‘Other nationalities had had rescue flights arranged, but there was nothing for Britons,’ she explained.

‘A friend back in the UK with some good connections in India got wind of a Lufthansa flight organised by the Germany Embassy, and when I told them I was travelling alone with a child they agreed to let us on. 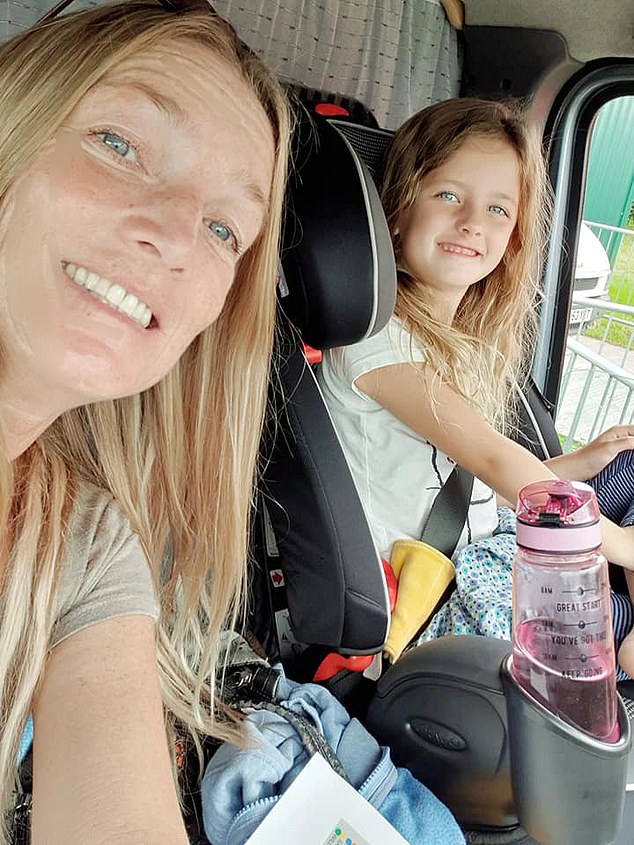 Dawn and daughter Rosie were spat on, shouted at and branded ‘coronavirus foreigners’ as the mood turned sour. Pictured, together 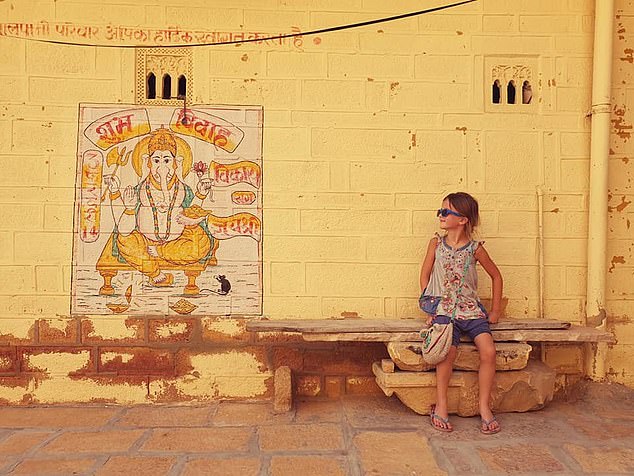 ‘I can’t describe the sense of relief walking into the peace and calm of the embassy gardens to await our transport to the airport. I could have cried.

‘We were looked after so well, greeted warmly and given refreshments. Our coaches to the airport had a military escort. By the time I got on the plane I was absolutely exhausted.’

Dawn and Rosie flew to Frankfurt on Thursday and arrived home late on Friday after a flight to London.

But yesterday (THURS) the British High Commission in Delhi said it was still working on a rescue timetable for the thousands still stranded in India.

Many are stuck in Goa where supplied of food and water have been scarce and police have resorted to brutality to enforce the lockdown.

Dawn added: ‘The British government should be ashamed. They keep saying they’re going to help but they’ve done nothing. It’s too little, too late.’