Rocket baby! Mother gives birth in just 27 SECONDS with a single push after getting up in the night thinking she needed the loo

A mum gave birth in one of the quickest times ever, taking just one push to deliver her baby in 27 seconds.

Sophie Bugg, 29, was 38 weeks pregnant when she popped to the loo in the middle of the night at her home in Basingstoke, Hampshire – only to leave the bathroom with a baby less than a minute later.

Her partner Chris, 32, had to act fast when Sophie appeared outside the bathroom door with the baby’s head between her legs.

With just one big push, baby Millie was born into her shocked dad’s arms and despite her extremely quick arrival, she is doing well. 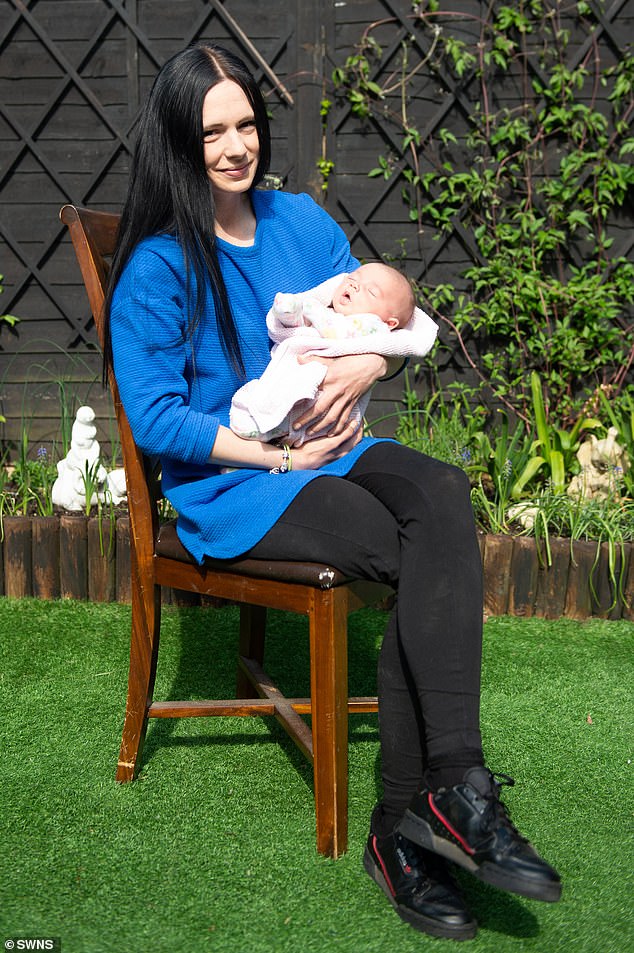 Sophie Bugg, 29, was 38 weeks pregnant when she popped to the loo in the middle of the night at her home in Basingstoke, Hampshire, and gave birth to her daughter Millie in just 27 seconds 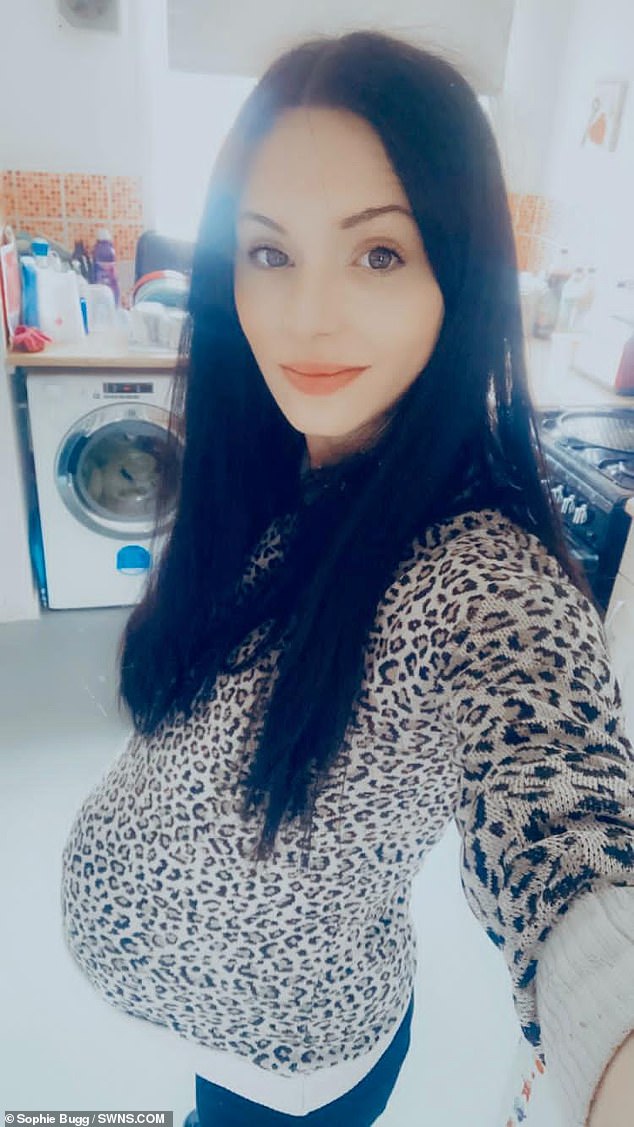 The mother-of-three, pictured while pregnant with Millie, got up to go to the loo and didn’t even realise she was in labour

Full time mum Sophie said: ‘She was ridiculously fast! One moment I’m texting my friend on the toilet and seconds later, I’ve got a baby in my arms.

‘Actually pushing her out from when the lady on the phone told me to push only lasted 27 seconds, it was so fast.

‘I had no pains and my waters hadn’t broken, there was no realisation I was having her at all. It sounds really crude but it just felt like I needed to go for a poo.

‘I had messaged my friend saying I don’t feel great, then put the phone down from where I was sat on the loo and went to get up from the toilet. 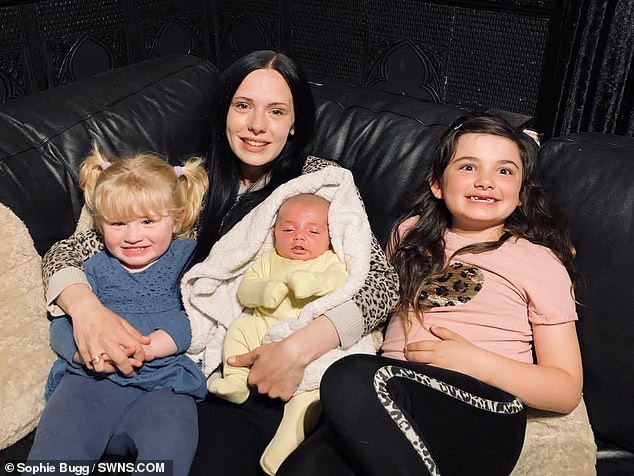 With just one big push, baby Millie was born into her shocked dad’s arms and despite her extremely quick arrival, she is doing well. Sophie with her three Lexie, Millie, and Paige

‘As I went to lift myself up, my body just got that feeling like I needed to push for a poo. So I sat back down, pushed, and as soon as I did that push, I knew it was not from behind!

‘I put my hand between my legs and her head was completely out. I shouted to my partner for help, went from the toilet to outside my toilet door on the top of the stairs, did one push and she was out!’

This isn’t the first time that Sophie has been taken by surprise by her speedy kids.

Back in 2013, the mum of three went to the toilet in the middle of the night and ended up delivering her first baby, Paige, now eight, just 12 minutes later.

Little Paige was born still in her sac, which is why Sophie’s waters didn’t break, and a paramedic was able to pop the sac safely.

Sophie was then booked in for an induction for her second child Lexie, now two, to ensure she was in hospital this time round and gave birth 26 minutes after being induced.

She said: ‘My first baby was quite an experience – you don’t expect anything like that with your first labour, to just be at home and then all of a sudden you’ve got a baby. 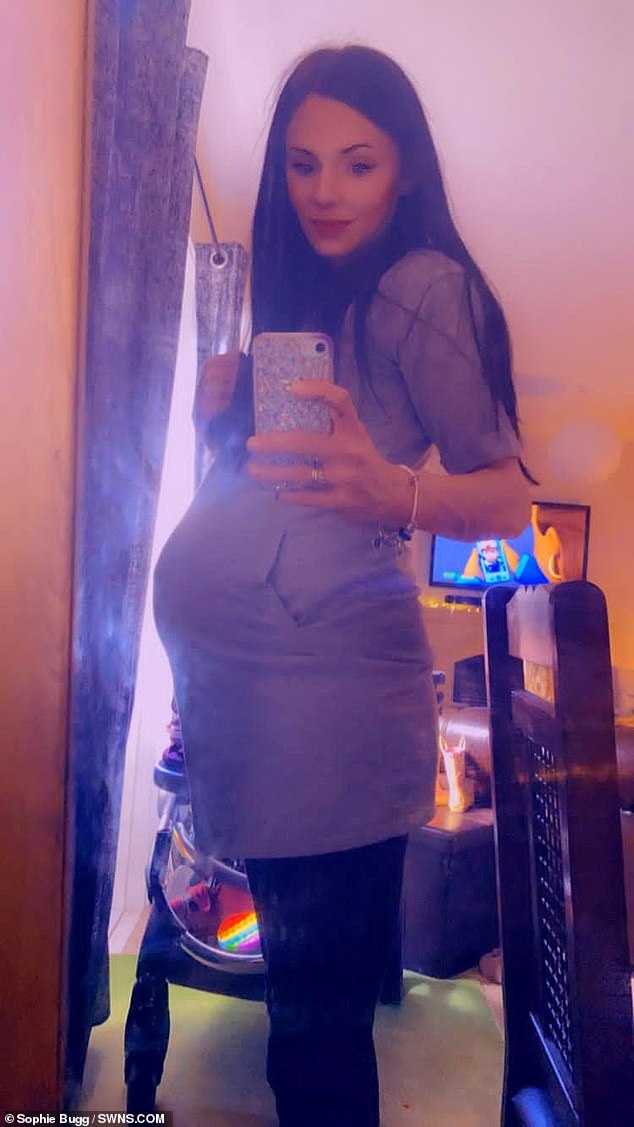 Sophie had been booked in to be induced a whole week before Millie was born. Pictured, Sophie pregnant with Millie 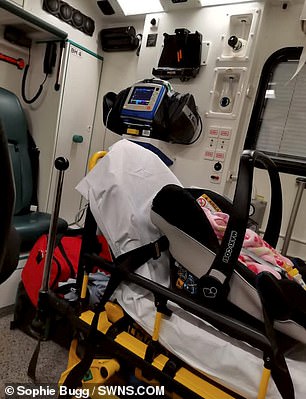 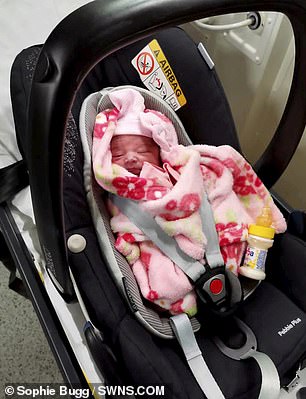 However the cheeky little girl decided to come even earlier and Sophie and Millie were taken to hospital to be checked over. Pictured, Millie on her way to the hospital

‘You don’t know what to expect. You get told all these different things from people like you’re going to have a show, you’ll have waters go, so you’re waiting for these things to happen and they didn’t for me so I didn’t think I was giving birth until her head was out.

‘My second baby, the doctors were so worried with the fact of how quickly I had my first that they had me induced so I was in hospital with my second, which was a relief.

‘But then my third baby had the exact same plans as my first, but came even quicker! I couldn’t believe how quickly she arrived.

‘My body doesn’t give me the signs of labour. My midwife and my consultant told me that I go from zero to baby, I don’t dilate like every normal person does.’

Sophie had been booked in to be induced a whole week before Millie was born but the cheeky little girl decided to come even earlier.

Two days before her planned induction, Sophie woke up in the early hours of the morning on March 23 with the urge to go to the toilet. 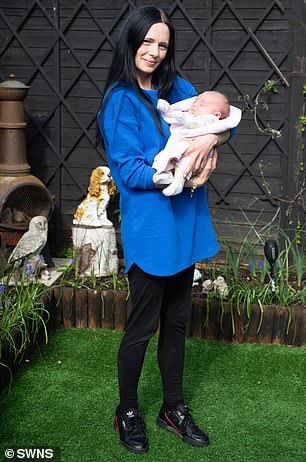 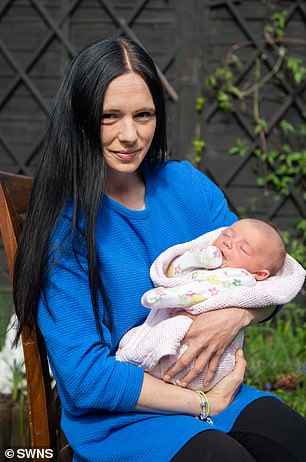 But mother and daughter, pictured at home, were released from hospital after a couple of hours in perfect health 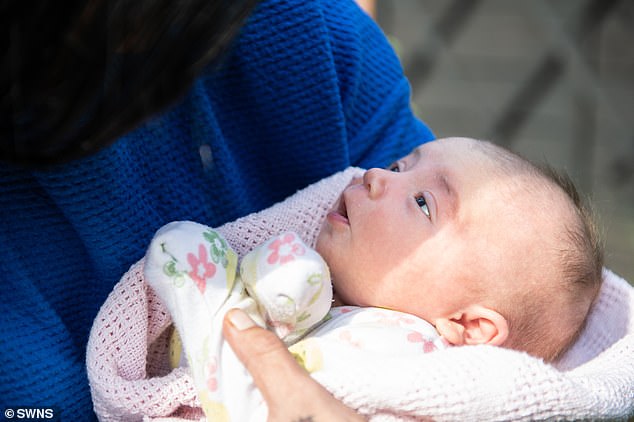 Sophie, pictured cradling her newborn, said she is in ‘disbelief that I ended up giving birth at home once again and even quicker’

She texted her friend to say she didn’t feel well and that she was going to go into the garden for some fresh air but her pal quickly warned her not to in case she gave birth.

By the time her friend’s advice came through on her phone, Sophie had already given birth to her newborn after pushing out her HEAD instead of a ‘number two’.

One more big push outside the toilet door with her panicked partner Chris, who works as a storeman, in front of her and baby Millie was born.

Sophie said: ‘I sat on the toilet, literally did a push and had the feeling that I should feel between my legs because it didn’t feel like a poo.

Why do some women have quick births?

Precipitate labour is when a labour is very quick and short, and the baby is born less than three hours after the start of contractions.

The exact cause of rapid labour is unknown, but women are more likely to have a precipitate labour if they have had one or more babies before or if they have high blood pressure.

However it can also occur in women who are having their first baby.

About two in 100 women whose labours have started naturally will have a rapid, or precipitate, labour.

‘I put my hand down and I just felt her head! It was four in the morning, it was just so unexpected.

‘I was calling Chris’ name as her head came out but so much energy was going into me giving birth, I felt like the lady off of Titanic, shouting ‘help’ but it wasn’t coming out loud enough!

‘I thought he’s not going to wake up but then when I got off the toilet, he was stood there in the doorway so he must have heard me.

‘I just looked at him and said ‘you’ve got to do the rest!’ His face dropped but then the phone came out, he was talking to the paramedics, it all happened so fast.

‘My two other kids both woke up in the commotion as well so I had my eight year old poking her head round her bedroom door asking ‘Mummy, are you ok?’ I’m like ‘yeah, I’m ok darling, just stay in your room for a minute!’

‘I went from sat on the toilet to outside my toilet door on the top of the stairs, did one push and she was out!

‘I asked Chris afterwards if he was alright and he was like ‘yeah, that was mad!’

Sophie remained on top of her stairs cradling her new born with the placenta still inside her for 12 minutes before a paramedic arrived.

The umbilical cord was cut and Sophie and Millie were taken to hospital to be checked over but were released after a couple of hours in perfect health.

Sophie said: ‘I was shocked when I gave birth to my first so quickly but I’m just in disbelief that I ended up giving birth at home once again and even quicker!

‘I had no pain relief with two of my kids and the afterpain with my third was terrible from where I was straining so much because I thought she was a poo. I was left so sore for weeks – I literally felt like a baboon!

‘I hear people’s stories and I know several people who have been in labour for 72 hours and I can’t possibly imagine that!

‘I’ve never experienced that – my longest labour was 26 minutes and I’ve had three children. I do feel sorry for these people who have to go through it!

‘My two friends are both pregnant at the moment and they always say I’m inhuman! They said I’m some sort of superwoman in human form.

‘With Millie, it was actually a really nice experience. Chris is the dad to all three of my kids but it has almost made us closer with the fact that he had to help deliver Millie.

‘It was just me, him and all the kids, so it felt special. It says on Millie’s medical paperwork that she was ‘delivered by Chris spontaneously at home’ so it’s really nice.

‘I’m just so glad I didn’t go out for fresh air – I would have ended up having a baby in the garden all on my own.’