GOLETA, Calif. — Most of the thousands of people who fled a raging California wildfire in the mountains north of Santa Barbara were told they could return home Tuesday as an approaching storm offered hope the flames would be doused.

About 4,000 of the nearly 5,500 evacuees were affected when authorities reduced the size of the evacuation zone.

The blaze had blackened more than 6.5 square miles (16.8 square kilometers) of the rugged Santa Ynez Mountains, but most of that acreage was scorched in its first hours Monday.

The fire was 10 percent contained by Tuesday evening and officials said about 2,400 homes and other buildings remained threatened.

Fire commanders described a fierce battle that saved homes as the blaze consumed brush in an area that hadn’t burned in 29 years.

An infamous 1990 wildfire in the same area destroyed more than 400 homes.

“It’s just a hard, difficult piece of country to fight fire in and the weather is the most extreme anywhere around,” said Jim Harris, Los Padres National Forest fire chief.

Rudy Gruber, 79, watched the smoke and flames from the top of a hill near his house in Santa Barbara.

Despite orders to evacuate, he said he decided not to leave because he didn't think the fire would cross a canyon to his home. Plus, it'd be tough to move his 50-pound tortoise, Amstel.

Even so, he’s been prepared for about a year, packing photo albums, computers and a carrier for his cat Scooter. 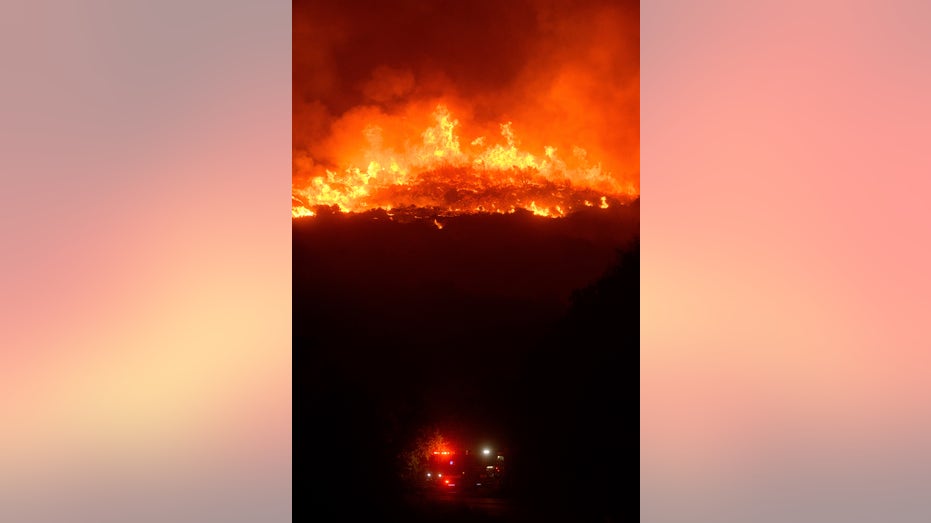 Gruber, who’s lived in the area since 1976, was facing his fifth fire but said he’s only evacuated once, when he saw smoke in his neighborhood in 1978. He didn’t see any this time, so he decided to stay put.

“We’re better prepared than we used to be,” Gruber said. “We’ve gone through it so many times now.”

Helicopters dropped water on the fire during the night, and daylight allowed air tankers to drop long strips of fire retardant to box in the flames.

The fire began in Los Padres National Forest as winds gusted to 30 mph (48 kph) and higher.

Miryam Garcia, 21, and her mother, Norma Ramos, 47, fled their home as flames approached.

“I was just kind of praying that it didn’t get to our house,” Garcia said.

She and her mother stayed overnight with friends and then went to a Red Cross shelter at a community center in Goleta, west of Santa Barbara.

Red Cross official Tony Briggs said 34 people stayed overnight at the shelter, where face masks were being handed out.

Fire officials said as much as an inch of rain was expected to hit the area by midnight.

Gruber said he’s going to visit cousins in Orange County for Thanksgiving and isn’t worried about his house.

“I’m counting on the rain to kind of snuff“ out the fire, he said.

The dangerous cycle of fire and flood is a raw memory for many others in the region.