Former prime minister Malcolm Turnbull says American-led wars in the Middle East have done more harm than good, with the Iraq and Afghanistan conflicts accelerating radicalism throughout the region.

Mr Turnbull backed Joe Biden and Donald Trump’s position to end the “neoconservative agenda of using American military might to remake the world”, but said both presidents made mistakes in the withdrawal. Despite their political differences, Mr Turnbull said, Trump and Biden were “absolutely on the same page” on wanting to end the costly wars, which was “hard to argue with”.

US anti-missile defences intercepted as many as five rockets that were fired at Kabul’s airport on Monday as the United States rushed to complete its withdrawal from Afghanistan. 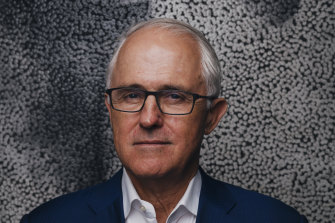 “The whole series of American-led wars in the Middle East have absolutely done more harm than good, there’s no question about that. You can’t gloss over that. Particularly the intervention in Iraq – the big winner out of that was Iran, and it accelerated the radicalisation of much of the Islamic world,” Mr Turnbull told this masthead.

Mr Turnbull’s position differs from other former prime ministers, including John Howard, who said the Afghanistan mission was not a failure because it stopped further attacks on western nations being launched from Afghanistan.

Former Labor prime minister Julia Gillard last week said that the original mission to degrade al-Qaeda was successful and she was “slightly more optimistic” than some commentators on the nation-building work done in Afghanistan. Her predecessor Kevin Rudd has mainly reserved his criticism for the US’s hasty withdrawal, while he has said the consequences for the Morrison government’s delay in launching an evacuation mission was “heart-breaking”.

But Mr Turnbull said when al-Qaeda was dismantled in Afghanistan “they just moved across the border into Pakistan”. While agreeing that many improvements were made in Afghan society, Mr Turnbull said the American-backed government was “widely seen as corrupt, ineffective and wasn’t able to command widespread loyalty”.

Mr Turnbull also said he was “puzzled” by the Australian government’s decision to close its embassy in Kabul in May, saying it left the country with no diplomats on the ground before it had withdrawn all Australian citizens and locally engaged employees who helped its forces during the decades-long conflict.

“I don’t understand why we thought it was too dangerous to leave our diplomats – the diplomats being in a very secure embassy which is bomb-proof, had guards, all the paraphernalia of diplomatic protection – but without having at the same time pulled out, or making arrangements to pull out, other Australians and people with a claim to Australian assistance,” Mr Turnbull said.

“I would have imagined in an environment like that, your diplomats would be the last ones out. I don’t think we’ve had an explanation.

“I’m not offering a criticism, but that is the one thing I don’t follow. Because if you look at the United States and the UK for example, their diplomats were on the last or second-last plane out.”

The Australian government decided to close the embassy after receiving an intelligence assessment from the Department of Defence that found that the security situation in Kabul could deteriorate quickly.

Australia has been criticised by some military experts and former soldiers for what they see as a relatively slow response in processing the applications of Afghan interpreters and other locally engaged workers. In the six years leading up to the fall of Kabul, more than 1800 Afghans who were engaged by Australian forces, and their eligible family members, were granted Australian visas – but there were still hundreds there when the Taliban took over.

In nine days and without an embassy on the ground, Australia managed to evacuate more than 4100 people following the fall of Kabul, ending its rescue operations hours before a terror attack killed 13 American soldiers and some 169 Afghan civilians. The US will withdraw its remaining forces from Kabul airport on Tuesday, two days after American forces launched a drone strike targeting a suicide bomber in a vehicle who was aiming to attack the airport.

Mr Turnbull said leaving behind people who assisted Australian forces was “a moral failure, but it is also going to discourage others from helping or working with you in the future”. The former Liberal prime minister said he couldn’t see a circumstance in which Australian forces would be deployed to Central Asia again.

Mr Turnbull said Trump’s decision to exclude the then-Afghan government from peace negotiations with the Taliban was “shocking” and a “massive vote of no confidence”. He said he understood Biden’s decision to continue the withdrawal from Afghanistan, but said “the execution of it has been very messy, to say the least, and tragic”.

“I think it [the withdrawal] will be seen as less of a debacle in six months than it is today. And the reason for that is the whole spectacle of the withdrawal, the evacuations, the collapse of the government was very, very shocking and confronting. The demise of American credibility is greatly exaggerated, with apologies to Mark Twain,” Mr Turnbull said.

John Blaxland, professor of international security and intelligence studies at the Australian National University, said Mr Turnbull was correct in not laying all the blame on Biden and Trump, saying the Afghan government could not be sustained without ongoing support.

Professor Blaxland said the Australian government’s decision to close the embassy was “shameful”. “It sent a very chill wind through Kabul that had a snowballing effect on morale, the willingness of others to stay and the resolve of the Afghan government.”