Artists painting a large mural of “teal” independent Monique Ryan on the side of an old pub in the seat of Kooyong were forced to down tools late on Friday after the building’s owner insisted he had not given his permission for the artwork.

A teal-coloured mural wrapped around the side of the former Junktion Hotel was emblazoned on Friday with “Vote #1 Doctor Monique Ryan”, a black-and-white painting of the candidate’s face, and the words “Active hope”. 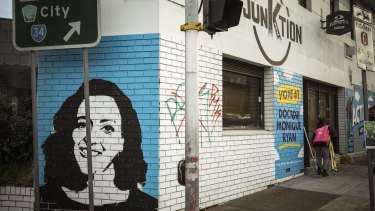 Painters pack up after being ordered to stop painting late on Friday afternoon.Credit:Chris Hopkins

High up above the ground-floor painting is one of Treasurer Josh Frydenberg’s “Keep Josh” digital billboards that cost tens of thousands of dollars per month.

Artists were putting the final touches on the piece at about 4pm on Friday when building owners told them to leave. It will now be painted over. One artist said she had been told permission to paint on the building had not been granted.

Peter Crinis, executive director of JAGA property group which owns the building, said Ryan’s campaign team asked earlier this week if they could paint the mural but his company had not given permission. “We’ve now sent some people to tell them to cease what they’re doing,” he told The Age.

A spokesman for Ryan said an agent working for her campaign had been told verbally that the owners had signed a written agreement to allow the mural. Evidence of this agreement was not presented and owners denied any such arrangement existed. 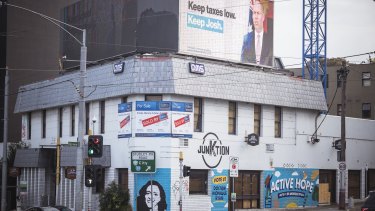 The mural at Kew Junction.Credit:Chris Hopkins

The Ryan campaign spokesman alleged the local Boroondara council had “heavied” the owners into stopping the mural.

The building owner insisted, “Nothing was approved or confirmed”.

“You can’t just go and paint a building without permission from the owner or council. We have to paint over it. It’s unauthorised and we’ll return the building to its original state.”

Ryan posted a photograph of the mural on Friday afternoon, after the painters had been stopped, saying: “A friendly building owner gave us permission to have the walls”.

In response to Ryan’s tweet and the claim of a verbal agreement, Crinis reiterated his position, saying “we did not give verbal or written approval”.

The property owners said they had been approached about the mural by Damien Hodgkinson, a founding director of the Climate 200 fundraising body convened by Simon Holmes a Court. Hodgkinson has also been blamed for incorrectly recording a $100,000 donation from a coal investor to Sydney independent Zali Steggall.

The painting is the latest flashpoint in a months-long ground war in the previously sedate streets of Kew and its surrounds.

Frydenberg will likely spend upwards of $2 million on advertising, including on major intersection billboards, at cinemas during the trailers, and on signs carried on the backs of hired workers.

Ryan has been more focussed on digital ads and smaller corflutes, thousands of which have been placed in front of homes and businesses.

Both candidates have had their material defaced. Frydenberg’s campaign team hired security guards to patrol the streets at night to catch vandals scrawling political messages, swastikas and Hitler moustaches.

Police are looking into a video of a Ryan supporter allegedly vandalising a Frydenberg sign last week. This is the only proven example of a supporter of either of the candidates allegedly engaging in vandalism.

Cut through the noise of the federal election campaign with news, views and expert analysis from Jacqueline Maley. Sign up to our Australia Votes 2022 newsletter here.