Jennifer Lopez and Ben Affleck were married on Saturday in Las Vegas, according to several news outlets and a marriage license that appears in a public records search bearing the names Benjamin Geza Affleck and Jennifer Lopez. 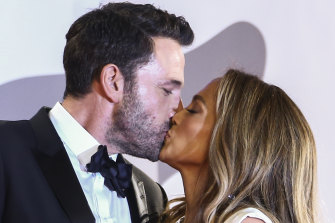 That information was good enough for TMZ, People magazine and Variety to giddily break the news Sunday afternoon of marriage for the famous duo, who announced their engagement in April. TMZ and People claim to have copies of the Clark County, Nevada, marriage license, and a person close to the couple confirmed the marriage to TMZ. People also reported an “insider” had confirmed the marriage, describing the ceremony: “It was super, super small. [Jennifer’s] mum and kids were there. They just wanted to be married, so they got married.”

In a newsletter sent to fans on Monday morning, Lopez confirmed the marriage and signed off with a new name: Jennifer Lynn Affleck.

The couple rekindled their romance in 2021 as divorced parents, to the world’s continued fascination. Lopez, 52, has been married three times – to Ojani Noa, Cris Judd and Marc Anthony – and has 14-year-old twins. Affleck, 49, was married to actress Jennifer Garner, whom he divorced in 2018. They have three children.

When the couple got back together, The Post‘s Emily Yahr wrote of the feelings it stirred up in long-time fans: “Looking back, the cultural phenomenon that was ‘Bennifer’ really did feel like an all-consuming, inescapable storm. The couple could barely go anywhere without being photographed. The lead-up to their ultimately cancelled 2003 wedding was described by one news outlet as ‘a week of media frenzy worthy of D-Day.’ As actress Mindy Kaling – who parodied Affleck in her breakout stage production – reminisced in her first book, ‘Bennifer was so big it was as though two people had never been in love before, and they had discovered it’.”

So imagine everyone’s delight when Bennifer re-emerged from the gloaming after Lopez split with fiance Alex Rodriguez. Lopez announced the (re)engagement in her newsletter and described Affleck’s proposal.

“Did you ever imagine your biggest dream could come true?” she wrote, according to People. “Saturday night, while at my favourite place on earth (in the bubble bath), my beautiful love got on one knee and proposed. I was taken totally off guard and just looked in his eyes smiling and crying at the same time trying hard to get my head around the fact that after 20 years this was happening all over again, I was quite literally speechless, and he said, ‘is that a yes?’ I said ‘YES of course that’s a YES’.”

She later told the magazine: “It’s a beautiful outcome that this has happened in this way at this time in our lives where we can really appreciate and celebrate each other and respect each other. We always did, but we have even more of an appreciation because we know that life can take you in different directions.”

This time around, it now seems the couple has gone through with it. Second time’s the charm, as Affleck suggested in a Wall Street Journal profile in December.

“I’ve had second chances in my career. I’ve had second chances as a human being. Life is difficult, and we are always failing and hopefully learning from those failures,” Affleck said. “The one thing you really need to avail yourself of the opportunities provided from that growth is the second chance. I’ve definitely tried to take advantage of that. I haven’t always been successful, but in cases in which I have, they’ve turned out to be the defining aspects of my life.”