A nearly eight-foot-long alligator attacked a woman who was walking her dog around a small lake in her neighborhood in Palm Harbor, Florida Tuesday, CBS Tampa affiliate WTSP-TV reports. First responders rushed her to a hospital but there was no early word on the condition of the 43 year old.

Pinellas County sheriff’s deputies and a licensed trapper removed the gator believed responsible for the attack.

WTSP says such attacks often increase during gator mating season of May, June and July. All of Florida’s 67 counties have gators.

Vance was nearby when he saw the gator lunge out of the water as the woman walked with her dog along the water’s edge. 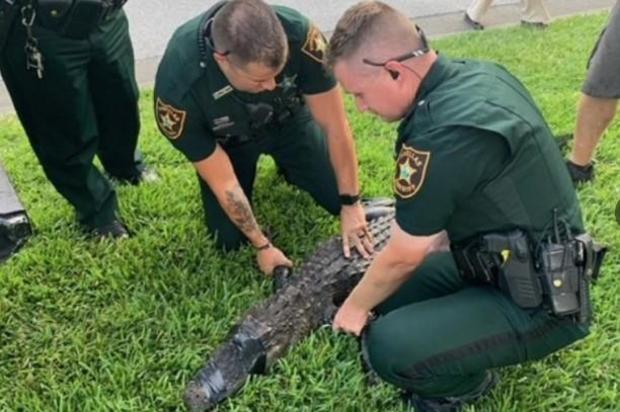 “The gator tried to get the dog but she grabbed the dog pretty quickly. But in turn, she slipped down and the gator got her leg just underneath the knee.”

Vance was first to call 911 as her boyfriend rushed in to help.

“He took off his pants to make a tourniquet. That’s how bad it was. To try to stop the blood,” Vance said.

Amy Pounder, who lives across from the pond, said  people often see the alligator while walking their dogs.

She reported it to management but says with only a faded out warning sign, more needs to be done to educate unsuspecting newcomers to Florida.

“They’re walking around with two-year-olds who are running toward the water and I said, ‘There needs to be more vigilance. We need to have preparation when you move in here no one ever says beware.”

Vance remarked that, “It’s one of those things — you kind know that the gators are there. You see these things happen other people but you never expect it to happen to you, so you just have to take precautionary measures and stay away from the edge of the lake.”

Experts say it’s rare for people to be seriously hurt by gators in Florida — but it does happen.

The Florida Fish and Wildlife Conservation Commission advises residentsand visitors to be especially cautious when walking around water at dawn and dusk, when alligators are most active — and can’t always tell the difference between people and their normal food.