According to reports, Donald Trump could be set to bring some of his adult children to the UK on the upcoming state visit next week. This may include Ivanka Trump, who is an adviser to the US President. The 37-year-old has forged a career as a businesswoman, but currently spends her time carrying out work on behalf of the Trump administration. What is her net worth and salary?

Ivanka Trump does not take a salary for her role as an adviser to her father, US President Donald Trump

The daughter of Ivana and Donald Trump, Ivanka was born into a very wealthy family.

Prior to his political role, Donald was best known for his roles as a TV personality and multi-millionaire.

Meanwhile, Ivana had made her own name as a model and businesswoman.

Having grown up in privilege, in her adult life, the mother-of-three, who is married to her husband Jared Kushner, has had all sorts of job roles.

This includes working in business, such as creating her own line of Ivanka Trump fashion items – featuring clothes, handbags, shoes, and accessories. 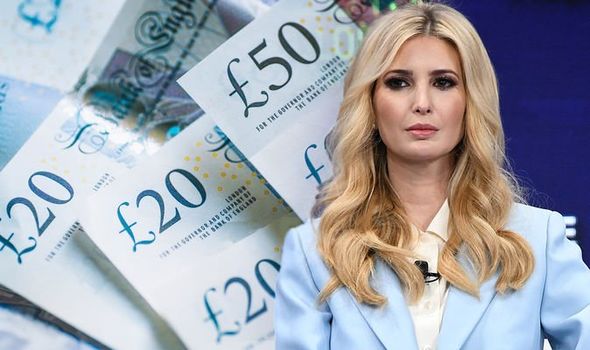 She also landed some gigs as a model, including being featured in print adverts for Tommy Hilfiger and Sasson Jeans.

Ivanka also appeared on TV shows such as The Apprentice, and portrayed herself in one episode of Gossip Girl.

With so many different aspects of work, it won’t come as surprise that Ivanka has a rather large net worth.

Her estimated net worth is $300 million, according to Celebrity Net Worth.

While she spends much of her time working as an adviser to the US President, Ivanka does not take a salary for the position.

Her spouse Jared Kushner, who works as a senior adviser in the White House, also does not get paid by taxpayers’ money.

This was confirmed in a 16-page document which was also shared with the US Congress in 2017 – the release of which has been an annual requirement of administrations since 1995.

The duo were revealed to be two of three people who work for the White House but are not funded via the channels as other staff members.

Are Ivanka and Melania Trump friends? A close-up look at the pair’s friendship.

Ivanka is not, in fact, her real name. She actually shares her mother’s name Ivana.

Explaining why she is known as Ivanka in a 2010 tweet, she said: “In Czech, Ivanka is the baby name for Ivana, like Bobby is to Robert.”

Ivanka was well known to the American public before her father became President thanks to appearances on TV.

She made short cameos on Project Runway and Gossip Girl, as well as becoming a primary boardroom member on The Apprentice with Donald.

Ivanka was raised as a Presbyterian Christian, but converted to Judaism to allow her to marry Jared Kushner.

Ivanka studied with Elie Weinstock from the Modern Orthodox Ramaz School, on the Upper East Side of Manhattan in New York City.

She now keeps kosher and observes the Jewish Sabbath. Ivanka said in the February 2015 edition of Vogue: “We’re pretty observant… It’s been such a great life decision for me… I really find that with Judaism, it creates an amazing blueprint for family connectivity.

“From Friday to Saturday we don’t do anything but hang out with one another. We don’t make phone calls.”

Ivanka ran a fashion line for 11 years, only recently closing it down. She also had a fine jewellery store which closed in March 2017.

Ivanka now focuses on her role as an advisor to the President, Donald Trump.