“If you’re going to treat me with such disrespect don’t bother coming back into work.”

This was the text massage my physio received from his boss of three years after he announced his resignation giving the standard four weeks’ notice. 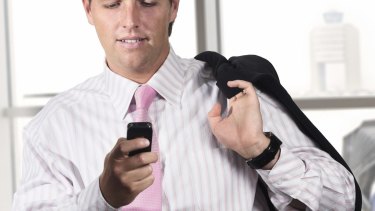 Rather than using text message resignations as a way to have yet another crack at young people, perhaps it’s time to accept that the world has changed and the rest of us need to keep up. Credit:istock

My twenty-something physio was shocked by his boss’ response. He couldn’t see what he’d done wrong. He’d given a month’s notice which, as a casual, was more than he was required to do. He was expecting his boss to be grateful. Instead, he’d been sacked on the spot.

It didn’t occur to my physio that the problem was not the message, but the medium. He’d delivered his resignation over text message.

A few weeks earlier the owner of my local cafe was just as offended one of his staff also quit via a text message. The employee was also 20-something and, from what I could tell, was a kind and considerate person and not the type who would be deliberately disrespectful.

“It’s just so rude,” fumed the cafe owner. “She couldn’t even be bothered to pick up the phone and speak to me. Young people these days just don’t know how to communicate.”

As a Gen Xer who entered the workforce at a time when only the CEO had a mobile phone and email was available only on one computer connected to a pinging dial-up modem, the idea of resigning from a job via a text message does seem unfathomable.

But I suspect that this may say more about me being an old fart than it does about Millennials being rude. After all, the content of these resignations is much the same as anything an older person would say, the only thing that has changed is the mode of delivery.

And hasn’t the mode of delivery changed for almost everything else?

Text messaging has become so normalised as a means of formal communication that government departments and banks use it routinely. Even Centrelink’s Robodebt system uses text messages.

OK, so Centrelink’s Robodebt system is not an example of anything we should be trying to emulate, but you can see why people might be confused about text etiquette. If your own government thinks it’s OK to send automated text messages or emails with potentially life-changing contents, then sending a personalised text message to your employer seems fine.

And it’s not as if remote, text-based work practice is anything new. As a freelancer I have worked for editors and clients for years that I have never once spoken to over the phone. Our entire professional relationship is conducted over email and text messages. If I were to quit one of these arrangements I would send an email.

You might argue that an email resignation is somehow different from a text message. But why? What’s the actual difference? Isn’t it just the same words, only transmitted over a different communications protocol and different carrier service?

Communications technology isn’t the only thing that’s changed in the past 20 years. The workforce has become increasingly casualised and employee conditions have eroded. The bonds between an employee and an employer are weak and flimsy — which benefits the employer but can be a nightmare for employees in terms of job security and lifestyle. The modern-day workplace is hardly a fertile ground for employee loyalty to sprout and flourish.

If bosses are essentially treating their staff with the dispensability of a Tinder date, can we really blame casual employees when they quit their jobs with the equivalent of swiping left?

Rather than using text message resignations as a way to have yet another crack at young people, wringing our hands about the instant-gratification-quitter generation, perhaps it’s time to accept that the world has changed and the rest of us need to keep up.

Let’s face it, if people can end their long-term relationship by changing their social media status, by comparison, sending a text message to quit a job seems like making an effort.

Kasey Edwards is the author of the young adult series The Chess Raven Chronicles under the pen name Violet Grace.