Amid the abundance of abysmal readings and projections from the latest global climate report was one frightening forecast that didn’t make the cut.

In the run-up to the release on Monday of the latest instalment of the Intergovernmental Panel on Climate Change was a leaked prediction that the Six Assessment Report (AR6) would bring forward the time the planet crossed 1.5 degrees by a decade to the early 2030s. 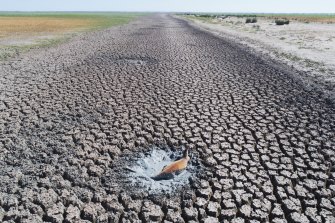 A dying kangaroo stuck in mud in the Menindee Lakes area of far-west NSW. IPCC projections are grim but not quite as alarming as reported before the latest report’s release.Credit:Nick Moir

That forecast was picked up in the Australian and UK media and shared on social media.

In fact, that line was among the projections discussed by some of the 234 researchers involved in compiling the first major update of the physical sciences behind climate change since 2013, but was ruled out during the vetting process.

“It had no basis in the science,” said Malte Meinshausen, one of the IPCC authors who argued successfully for the deletion of the 10-year advance.” It was caught late in the process … and governments would have jumped on it” if it hadn’t been excised.

Professor Meinshausen, who works at the University of Melbourne and is a team member working on the upcoming AR6’s Synthesis Report, said including the decade advance “could have backfired”.

Groups opposed to action to reduce carbon emissions have highlighted flaws in previous IPCC reports. Among the most famous was a claim in a 2007 IPCC report that Himalayan glaciers could melt away by 2035, a statement the UN body later admitted was a mistake.

In an explainer, Professor Meinshausen noted the IPCC’s 2018 Special Report on 1.5 degrees warming stated in its summary for policymakers the world was likely to cross the threshold between 2030 and 2052, if warming trends continue.

That report and the new AR6 report take a consistent line. In a very low-emissions scenario, the best estimate in the latest report out Monday of when 1.5 degrees warming might be reached AR6 is about 2034.

In that 2018 report, the comparable estimate was 2035, which is “exactly the same within rounding”, Professor Meinshausen said in a briefing.

Liam Mannix’s Examine newsletter explains and analyses science with a rigorous focus on the evidence. Sign up to get it each week.