The Cry, an ABC/BBC co-production which aired here in February (it was on in the UK in September; the tape must have arrived via tall ship), is a very good, although not very feel good, TV show.

Set between Glasgow and Victoria's Surf Coast, its non-linear plot is a queue of horrors: there's an abusive relationship, then there's a missing baby, then the baby is dead, then someone else is dead … It contains roughly a dozen depressing twists, like a baker's bag of raisin pastries. 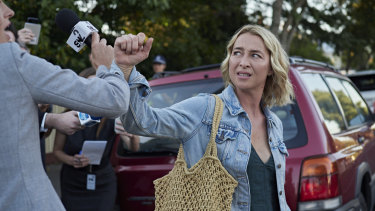 Asher Keddie in The Cry.Credit:ABC

But, for me, the most terrifying part of the series was not any of these melancholic morsels.

In the second episode, the ex-partner of the man whose baby has gone missing, played by Asher Keddie (the ex-partner, not the baby), is identified as a suspect. She is pulled into a police station and asked to explain why, after her breakup, she created an anonymous social media account with which to follow his new girlfriend.

And, I ask the room: is being asked by a police officer to explain your strange social media use not one of the most positively harrowing scenarios you have ever heard?

Of course, this woman's behaviour – which really moves beyond "social media stalking" to just garden variety "stalking" – is definitely at the extreme end of the spectrum.

However, imagine if, after you've spent an hour deep in your colleague's 2017 Egypt trip, maybe even sending a screenshot to another colleague for whatever innocuous reason, that colleague went missing. And there you are, sitting in a Lorne police interview room, trying to justify exactly why you went through all 200 pictures from her Topdeck tour.

Yes, the police would hopefully have some stronger leads, but … it's the principle!

There can be little reason or rhyme to where we end up online; many have succumbed to some slightly strange use of the Internet, especially while getting over a love.

Profiles have been sat on, stories re-watched, new followers monitored. All of a sudden, that tab which lets someone view the likes of people they follow on Instagram has a use. Podcasts recorded by former flames have been listened to, for goodness sake; podcasts about the ASX, and hardstyle music.

Sydney therapist Isiah McKimmie says people can fall into the trap of repeatedly visiting their ex's social media accounts for a few reasons: perhaps they haven't let go, are looking for more information or signs that they might be able to get back together, or are even using their ex's life to feel better (or, it must be said, worse) about their own.

"It's kind of a way we punish ourselves," she says. "We keep ourselves feeling bad about the breakup."

She says although it is a common trap for people to fall into after a breakup, she struggles to think of a legitimate reason for someone to do it, noting that, while it is an anonymous and easy way to stay across what someone you once knew everything about is doing, it can lead to someone "focusing on the other person, instead of [themselves] and moving on".

"You need to be honest with yourself about why you're doing what you're doing," she says. "With that honesty and that awareness we're in a place to make a change in our behaviour."

If you do find yourself sitting on the Instagram profile of a former flame, Ms McKimmie recommends immediately putting the phone down and doing something else or, if that doesn't work, use the phone to call a friend and talk about how you feel.

After watching The Cry, might I propose this standard for monitoring the reasonableness of how someone – a loved one or, frankly, you – use social media after a breakup:

If the Lorne police asked you to explain this behaviour, could you?

Seriously, if a regional Victorian police detective pulled you, whom I permit you to imagine as being played by Logie award-winning Keddie, into a room and said, "Mate, why do you look at what your ex from a year ago likes on Twitter at least once a week?", could you provide a rational response?

Or would you be arrested in relation to the mysterious disappearance of their child?