“People are using cannabis in ways aside from, let’s get high and party,” Ariel Zimman, founder of Portland-based marijuana accessories company Stonedware, told The Journal. “It’s not counter-culture anymore.”

This spring, upscale department store Barneys New York launched a “luxury cannabis lifestyle shop” called “The High End” in its Los Angeles location, where it sells products like a sterling silver pipe for $1,345, a $630 vape pen, a $920 ashtray, and 24 karat gold rolling papers.

While recreational marijuana use is not yet legal in New York, Governor Andrew Cuomo said last year thatlegalizing marijuana is one of his top legislative priorities for 2019. And attitudes to the drug are changing swiftly.Baby boomers who previously demonized marijuana use are now lighting up, often for help with sleep and mental health. And aCBD craze has taken hold across the country, with sellers touting wellness benefits and Wall Street expecting sales of the cannabis compound to be a $16 billion industry by 2025.

I recently took a tour of Edie Parker’s Flower to get a look at the products. Here’s what it’s like inside the new upscale head shop.

Edie Parker, a brand known for its handbags and whimsical home décor, has launched a line of upscale cannabis accessories called Flower, sold in its New York City boutique on ritzy Madison Avenue. 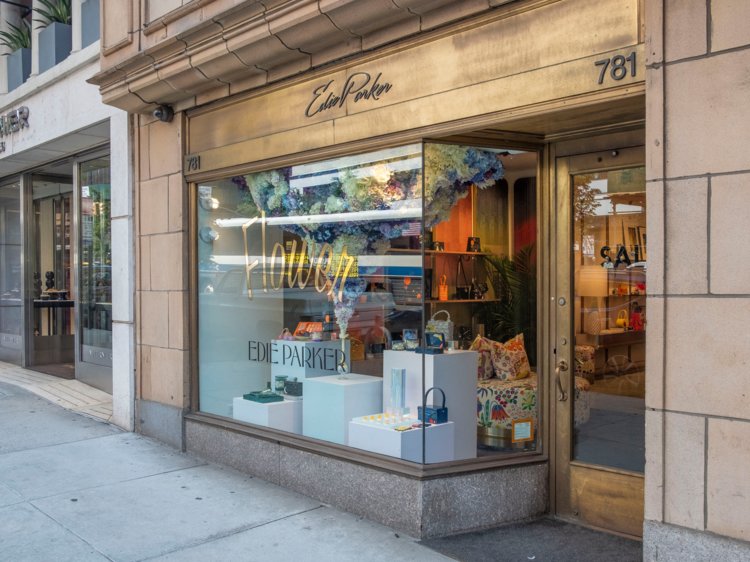 On a recent afternoon, I headed to the Upper East Side to get a look at the new line.

I was surprised to learn that marijuana paraphernalia was being sold on the Upper East Side of all places, which New York City’s tourism website describes as the “leafy home to the city’s elite” and “a place for pastry, pearls and pocket squares.”

Edie Parker, which is known for itshandbags and quirkyhome décor, is planning on expanding its marijuana accessories line to include vape pens and other products, according to founder and creative director Brett Heyman.

The first thing I noticed upon looking in the window was a bong overflowing with a display of faux flowers. 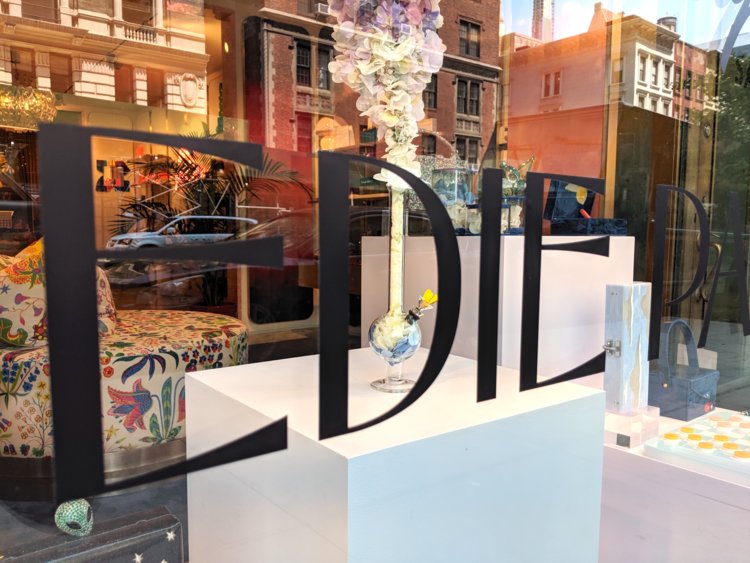 A rather on-the-nose reference to the name of the line, I thought.

Several Flower products were displayed in the front window. Delicate and colorful glass pipes nestled in with coasters, perfume bottles, and other home accessories. 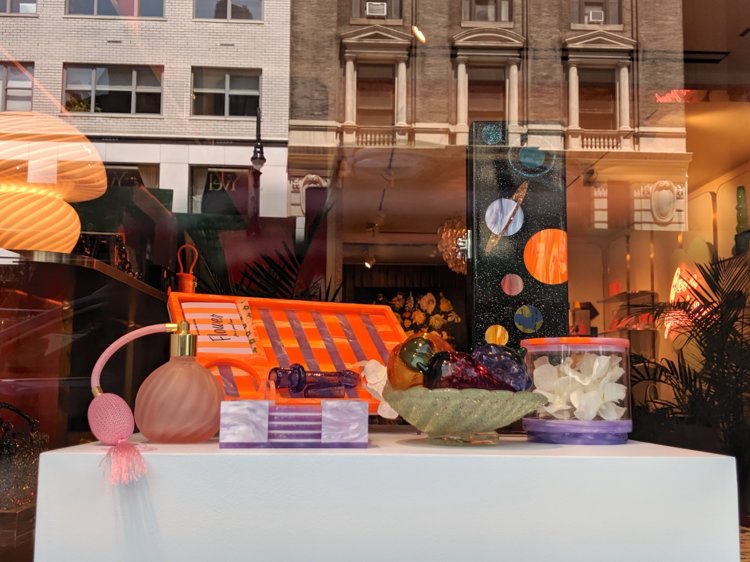 The cannabis accessories seemed to fit right in with the brand’s other fanciful products.

An artful display of mini-bongs, glass pipes, and lighters sat alongside an outer space-themed clutch and more faux flower petals. 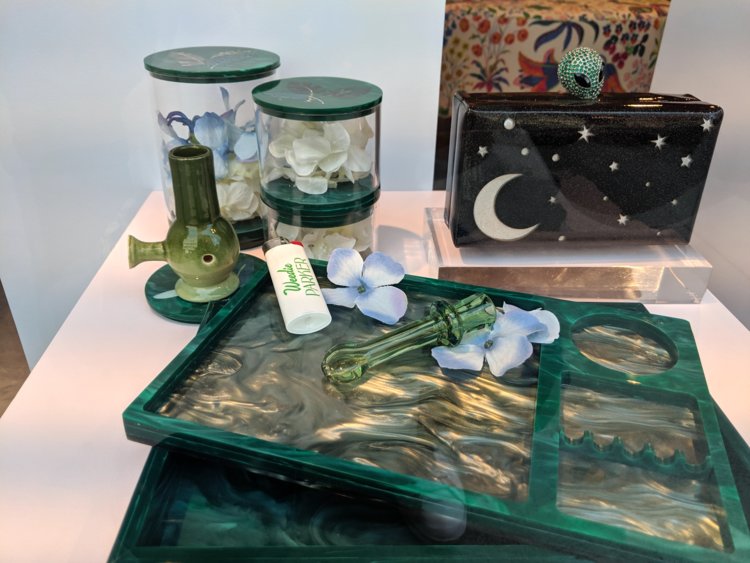 I was somewhat surprised that the cannabis accessories were so prominently displayed in the front window. It was a stark contrast to the neighboring Chanel and Oscar de la Renta boutiques.

From the inside of the store, the flower display expands dramatically out of the bong to reach up to the ceiling. 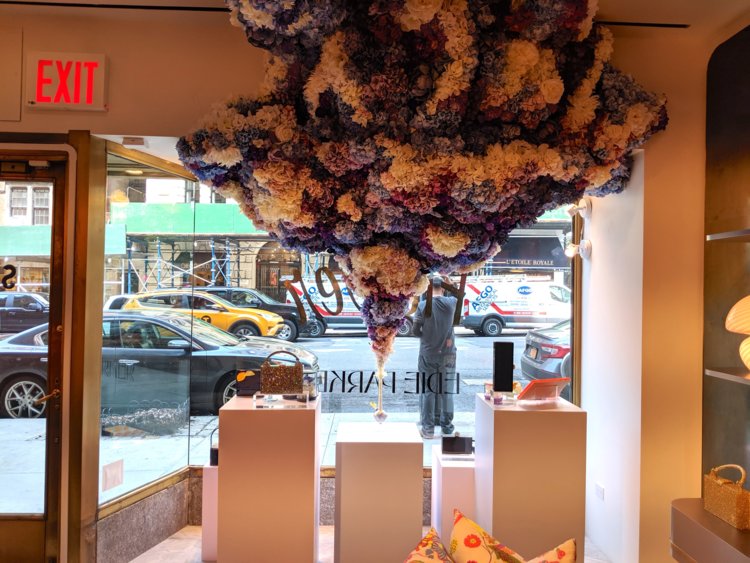 The colorful, whimsical boutique was a far cry from other smoke shops I’ve seen, which are often overcrowded with products and don’t seem to give much thought to design. 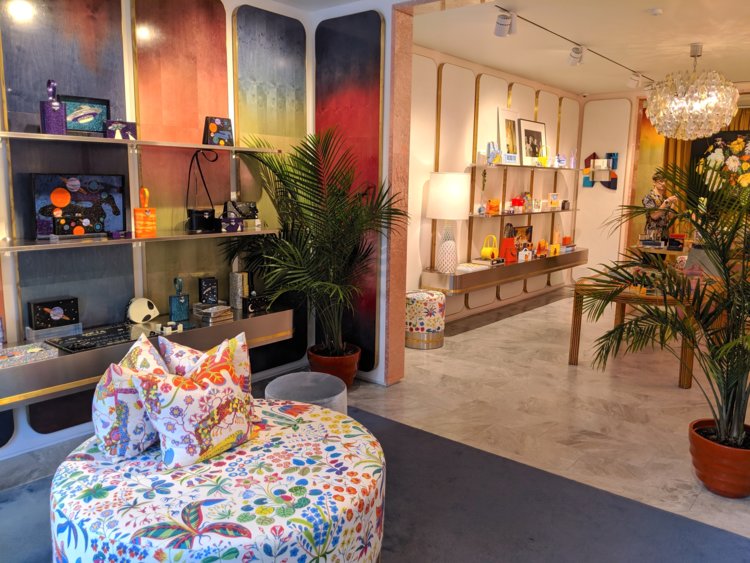 The front half of the store is primarily devoted to handbags and home accessories.

Anchoring the back section of the store is a table displaying the bulk of the Flower line. 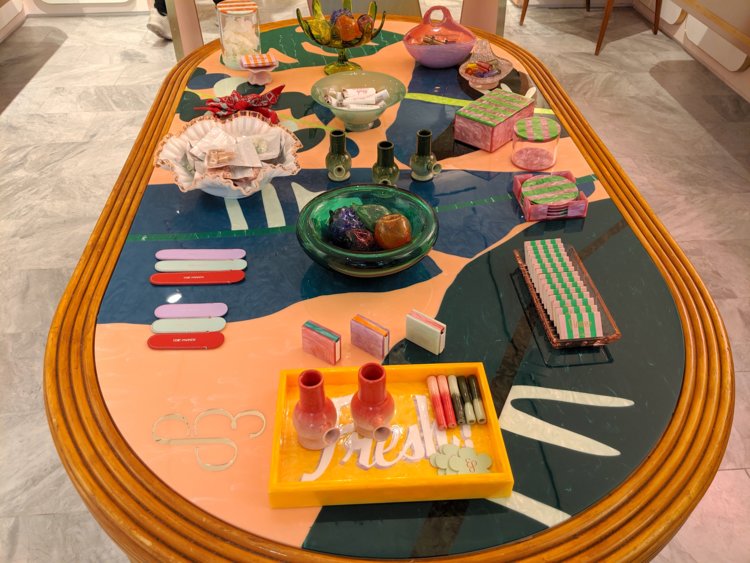 I immediately noticed there were no price tags on anything. A sales associate told me the tabletop lighter (left) is $450 and the mini-bongs (right) are $125 a piece. 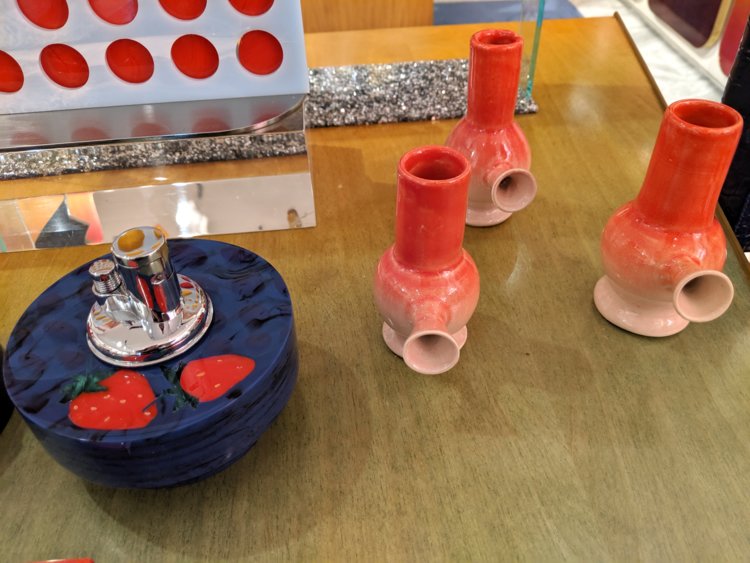 Edie Parker’s founder and creative director, Brett Heyman, told me in an email that none of the items in their home collection have price tags.

“It is simply an aesthetic decision, it has nothing to do with price transparency,” Heyman said. “All of the handbags have price tags inside.”

According to the website, the most expensive Flower product is a $1,095 acrylic “Leaf Go Go Bag,” to carry “your not-so-secret stash,” which I don’t remember seeing in the store.

The Flower line includes hand-blown glass pipes in the shape of various fruits, from strawberries to bananas to a bunch of grapes. 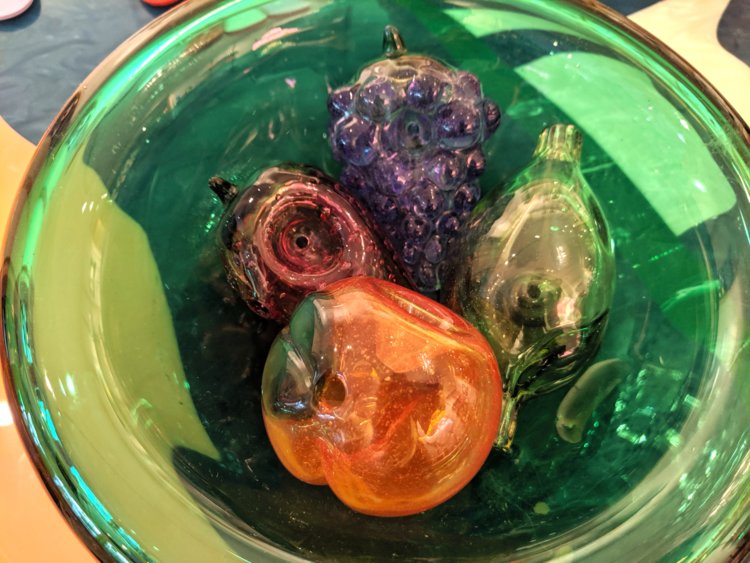 While the entire collection has a playful vibe, these lighters made me laugh out loud. 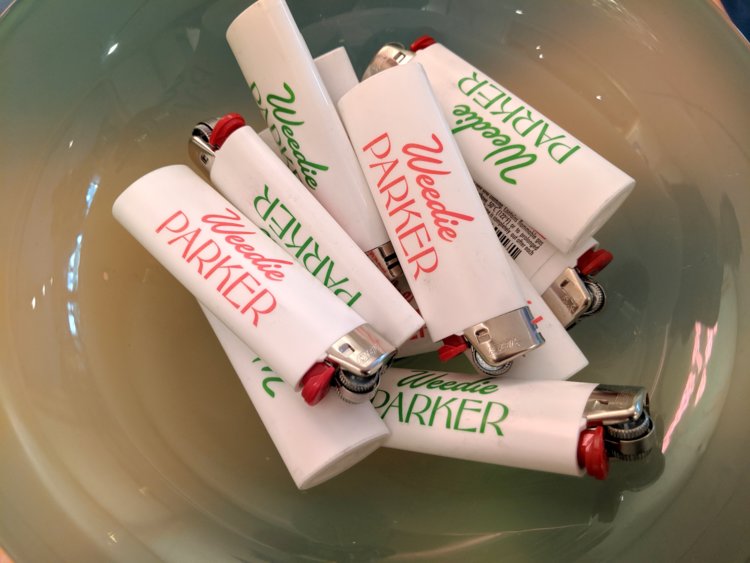 Part of me wished they’d named the entire line “Weedie Parker” instead of Flower.

Heyman said she hopes the Flower products will appeal to “women of all ages who want to have a good time. And hopefully some men, too.” 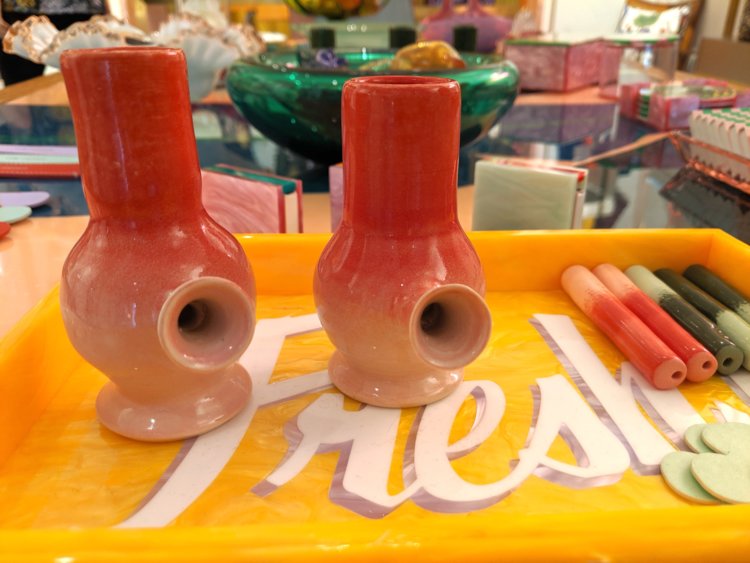 I could certainly see how the design-oriented products — which could almost double as interior décor — would appeal to my own friends. But personally, I wouldn’t pay $125 for a mini-bong unless I was giving it as a gift.

The line will continue to expand to offer vape pens and other products. 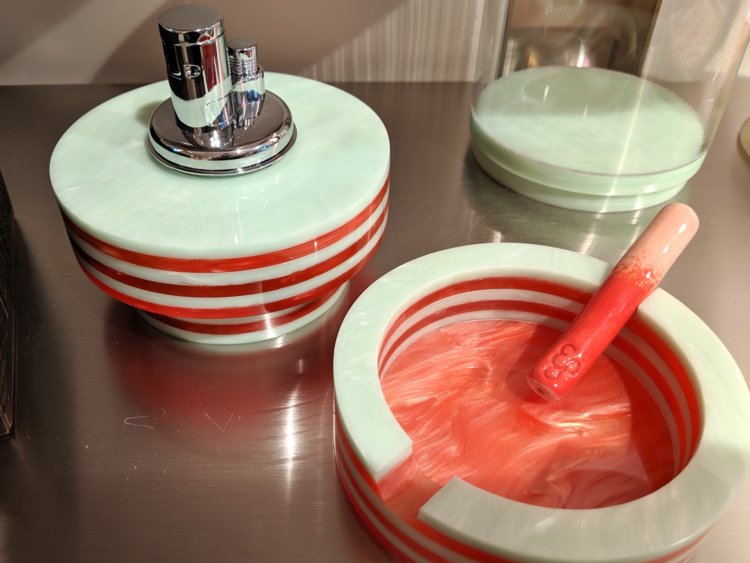 Heyman told me they’ll be releasing “an expanded breadth of lifestyle products, and working on a vape pen and pre-rolls which we will launch in the fall.”

The pre-rolled joints will not be sold in New York, of course, but only in Los Angeles. Edie Parker has also developed three cannabis strains available in Los Angeles through a delivery service called Emjay.

To me, Flower and other high-end (pun intended) marijuana accessories shops are emblematic of how dramatically weed culture is changing in the US. 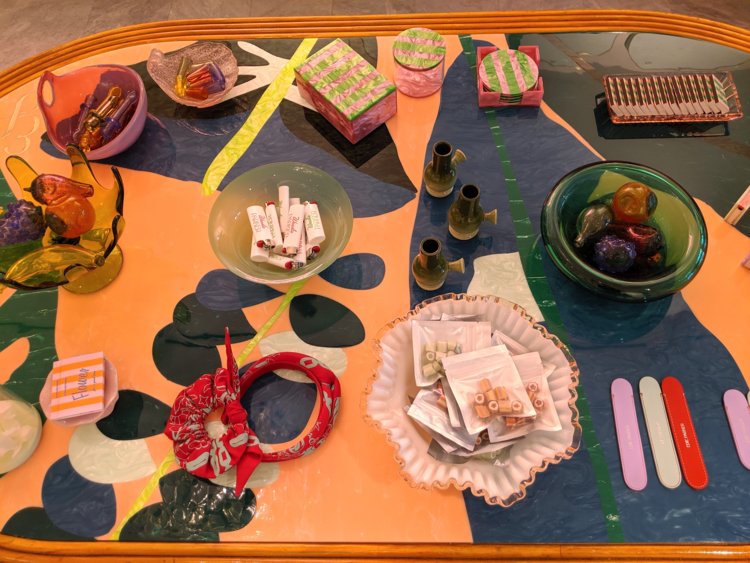 In herWall Street Journal article, Lane Florsheim questioned, “Is stoner culture as we knew it over forever?”

While that question may be up for debate, there seems to be no clearer sign that there’s a major cultural shift surrounding recreational marijuana use than that a luxury brand is marketing it to affluent New Yorkers on the Upper East Side.

SEE ALSO:8 incredible facts about the booming US marijuana industry

DON'T MISS:Here’s what marijuana actually does to your body and brain