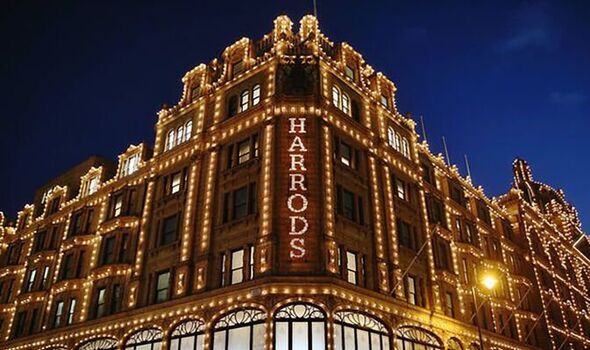 From food halls with delicious treats to shopping floors packed with luxury retailers, the Knightsbridge department store is a destination for countless visitors to the capital. MyLondon’s Jessica Battison braved the May half-term crowds and went for a wander through Harrods to hear what people were chatting about while perusing the shelves of this famous store.

After overhearing some hilarious and unusual conversations, Jessica complied a list of the best things she overheard in the department store as well as some contributions from Twitter users.

The Harrods Gift Shop is a destination for plenty of tourists visiting London, thanks to the department store’s world famous branding.

Filled with Harrods-emblazoned goods from teddies and tote bags to pens and oven gloves, the department store sells every bit of merch you can imagine.

And according to one American tourist: “Everyone needs a London notepad.”

There are £20 teddy bears which left a pair of elderly men struggling to choose between them: “I think the teddies are just so great.”

Even gift-wrapping gets some excited: “I feel like an old woman in here. I love wrapping paper.”

Harrods has plenty of royal-themed gifts which led to an interesting conversation between a group of American teens.

“My sister, she’s obsessed with the Royal Family and she was like get me something with the Queen’s face on it,” to which her chorus of friends responded:”Ewwwwwwww.”

Then there is the food hall and the store’s many restaurants. And on their way out, a young girl tried to convince her unimpressed, empty-handed family: “If you buy it, like once a year, like treat yourself in Harrods, maybe it will be worth it.”

A couple admired a bowl of expensive salad as one said: “Oh that looks nice, we should make it ourselves tomorrow.”

With counters filled with colourful, picture-perfect cakes, one sarcastic Scottish dad pointed out to his Instagramming daughter: “Oh look, a slice of cake! Interesting isn’t it?”

Also in the patisserie section, one lady scoffed to her partner: “We could also just get the M&S one instead of paying that.”

Then as they passed the famous celebrity chef’s restaurant on floor four, a woman suggested: “Gordon Ramsay burger?” To which her partner responded: “I prefer Jamie Oliver me.”

Also on floor four is Harrods’ famous toy section, which during the half-term holidays was unsurprisingly full of wide-eyed children poring over the premium teddies and amazing games selections.

Unable to decide quite what she has always wanted, one young girl ran from shelf to shelf, exclaiming: “Oh! This is what I’ve alwaysssss wanted. Oh but look at this one mum! Wait, and this one!”

With staff on every other corner demonstrating magic tricks and fake snow, one child was rather impressed by a little gadget.

“Can I get it dad?” But their father was not impressed: “No they never work when you get home. They never work.”

Admiring the seemingly endless selection of teddies and dolls, a young girl was doing her very best to persuade her dad: “I need this daddy, do you know why?” “Because you’ve already got so many in your room?” “Well yes, but.”

One child however was more impressed by the price tags: “Wow dad, look at the price on him,” she said as she pointed at a £1,800 giant Bambi teddy.

But across various areas of the store, rang the phrase that’s a nightmare to the ears of any parent: “But mummy, I want that one!”

We also reached out to Londoners on Twitter and received some great responses including:

– Woman to toddler, tugging at her arm in the Chocolate Hall: “Casper! Darling, behave. This isn’t Waitrose!”

– “I used to work there and in training was told someone had called and requested a box of cupcakes be delivered to them (in Saudi, I think…) via private jet. They did it. It was a lesson in how we can and will always give big spenders what they want!,” another said.

– A third person said: “‘I love the story Nigel Havers tells. Trying to convince a fellow actor that one can buy “literally anything” there, he’s challenged to order an elephant. His call to the Pet Department is answered with “Certainly, sir. African or Indian?”‘