Keir Starmer was no longer over a barrel: HENRY DEEDES watches the Labour leader in fight mode at PMQs

Not often in the Commons do you get both Conservative and Labour benches hootin’ and a hollerin’ in unison.

Once in a blue moon does such rare a moment of harmony arise. Yesterday was one such day.

It occurred a third of the way through PMQs, a time when SNP leader Ian Blackford’s face normally beams onto the screens from his luxury Mar-a-Lago on the Isle of Skye to spout his weekly drivel.

The effect is usually akin to rolling a live grenade into the chamber. The mere mention of the Scotch windbag’s name has members scrambling for the exits like a confusion of charging wildebeest.

So you can imagine the scenes when Speaker Sir Lindsay rose from the chair at 12.10pm and, with the affected ruefulness of someone who’s learned his neighbour’s irritating cat has gone awol, announced sorrowfully: ‘We’re ‘avin’ technical difficulties with the leader of the SNP.’ 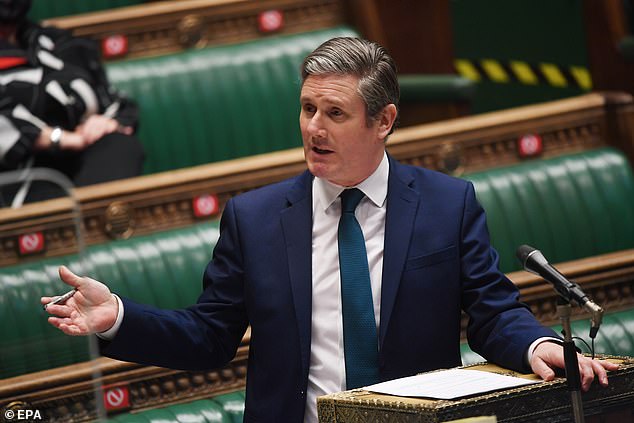 Sir Keir Starmer (pictured) was in a fighting mood in the Commons, showing a ruthlessness lacking in recent bouts

The House erupted. There were cheers and guffaws. Even Sir Keir Starmer allowed himself a little smirk.

As for the Prime Minister, his eyes suddenly twinkled as though he’d just yanked on a one-arm bandit and seen all three cherries pop up. Jackpot! It was the chirpiest he’d looked all day.

For the first time in weeks, Boris endured a testing time from the Opposition leader. Sir Keir focused his questions on the decision to give nurses a one per cent pay rise. It had previously promised them a 2.1 per cent hike in its funding bill.

There was a ruthlessness about Sir Keir lacking in recent bouts. Before the off, he blanked the PM behind the Speaker’s chair. Boris offered his opponent a nod only for Starmer to avert his gaze. Perhaps he couldn’t see him behind his mask, a covering so large it has a touch of the Darth Vaders about it.

For once, Sir Keir had brought along some half-decent jibes. He compared Boris’s measliness toward NHS staff with his odd decision to hand his (now departed) advisor Dominic Cummings a £45,000 pay rise last year.

There was a neat line too about the PM clapping nurses ‘before shutting the door in their face’. He’s also learned to wrestle ugly. At one point, Starmer chided the PM for shaking his head petulantly. Boris was simply gnawing on his pen. Sly. 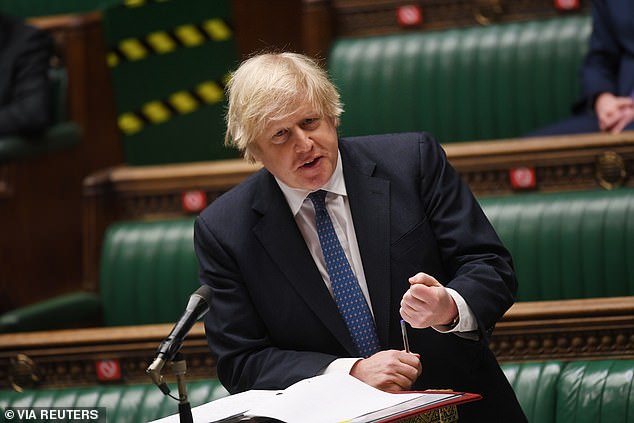 Boris Johnson (pictured) played the NHS issue defensively. The only attack he could muster was claiming Labour had voted against his original 2.1 per cent proposal. In fact, they’d nodded the bill through. Oops

The PM played the NHS issue defensively. The only attack he could muster was claiming Labour had voted against his original 2.1 per cent proposal. In fact, they’d nodded the bill through. Oops.

For weeks, Boris’s had Labour over a barrel, but on this issue they have found a scab at which to pick.

As for the rest of the session, we were back to mundane queries about topics such as dodgy rail links and the resurfacing of the M25.

We ended with Labour’s Jon Ashworth rising to make a point of order over the erroneous remark the PM made about Labour voting against his NHS funding bill.

Boris had already bolted for the door. That high-pitched screech you can hear in the distance? The sound of another government U-turn on nurses’ pay. Just you watch.