Dental heiress, 18, who drives a £31,000 Audi and spends £400 a WEEK on meals out admits she’s ‘scared’ of staying in a static caravan park with a handyman and his family on Rich Kids, Skint Holidays

A rich heiress used to the finer things in life – including £8,000 pieces of jewellery and a £31,000 car to drive – gets a tough wake up call while on holiday with a skint family.

Roumaissa, 18, from London, spends a few days in Norfolk with self-employed handyman Neil and part-time teacher at a school for special needs children Nicky Cope and their three daughters, Grace, 14, and twins Lauren and Charlotte, 13.

Living off the generosity of her father, who owns Africa’s biggest dental laboratory, Roumaissa splashes £300 to £400 a week on fine dining, and spends another £500 a month on makeup, hair and beauty treatments, and clothes.

She also drives an Audi TT, priced at £31,000, courtesy of her father, and owns a £32,000 designer handbag, also gifted by her parent and uncle for her 18th birthday – which Neil observes ‘could pay half my mortgage.’

On tonight’s Rich Kids, Skint Holiday on 5Star, a major culture clash occurs when the heiress meets the Copes, who have been scraping by all year to afford a coastal holiday in a static caravan park by the beach in Norfolk, costing £179 a night for six.

Nicky, who earns just £1,000 a month to support her family, was shocked by how easy Roumaissa’s life appeared – but eventually, the mother-of-three and wealthy teeanger bonded in spite of their very different budget. 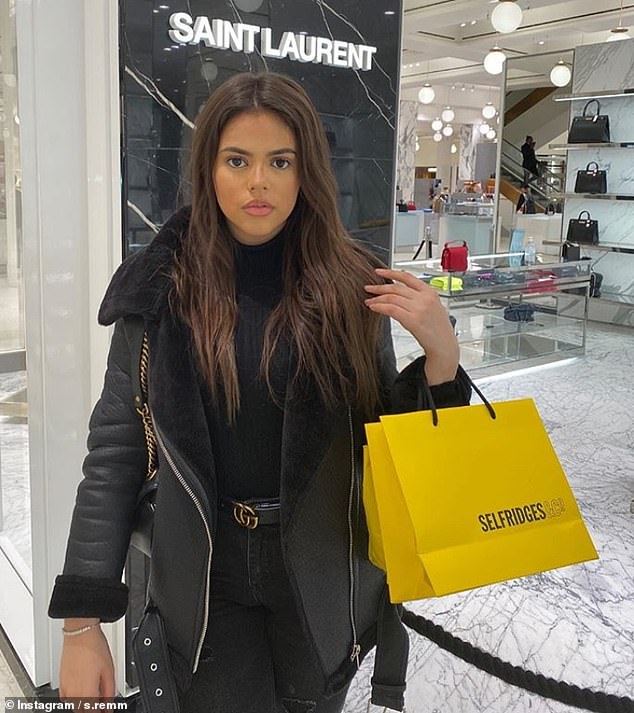 Roumaissa (pictured), 18, from London, is the daughter of a wealthy owner of a dental laboratory who funds her luxury lifestyle. She will gladly spend £9,000 on a Louis Vuitton bracelet or designer handbags 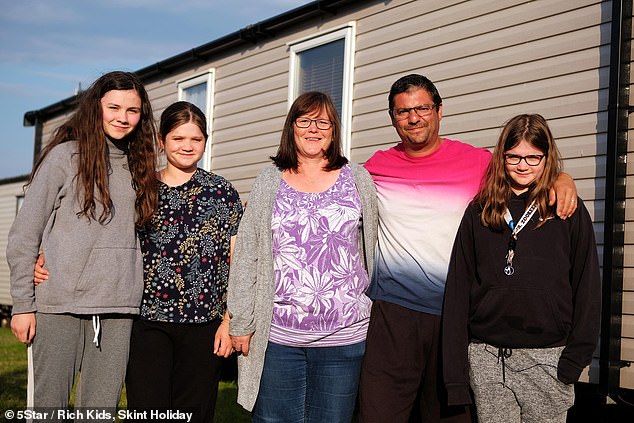 Roumaissa holidays in Norfolk with Nicky and Neil Cope, and their three daughters Grace, 14 and twins Lauren and Charlotte, 13

At the start of the programme, Roumaissa, whose parents are divorced, explains that she can always count on the generosity of her father, who lives in Casablanca, Morocco.

Roumaissa is used to travelling to exotic and lavish destinations on her holidays, with handy ‘top-ups’ from her father, who will gladly pay for her business class plane ticket and top-up her allowance by £2,000 to £3,000 for shopping sprees.

Thanks to her parent, she is able to afford a £8,000 bracelet from Louis Vuitton, several pairs of designer shoes and bags, including a clutch from Gucci, costing £1,300.

When the teenager comes clean about her birthday presents to Neil and Grace, the both of them appear to not believe the level of wealth Roumaissa has enjoyed. 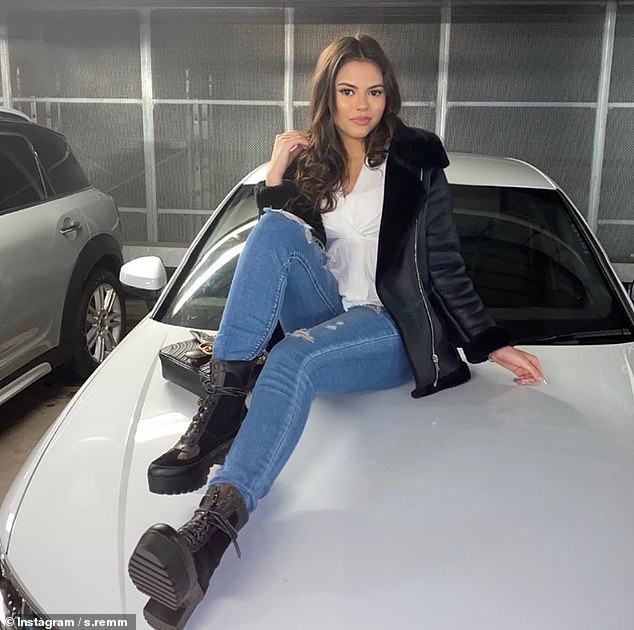 ‘That could pay half my mortgage,’ Neil observes, while soft-spoken Grace simply laughs. ‘That’s blown my mind a little bit,’ the father-of-three later says in an aside to the camera.

Because she never had to worry about when the next penny would be coming from, Roumaissa assumes everyone goes on holiday each year, and is shocked to find the Copes sometimes just stayed home during the summer.

Grace explains to her that she had never been on a plane or left the country because the family preferred to travel locally.

The responsible teen is also taught the value of money by her parents, and earns her allowance by performing chores around the house with her sisters. 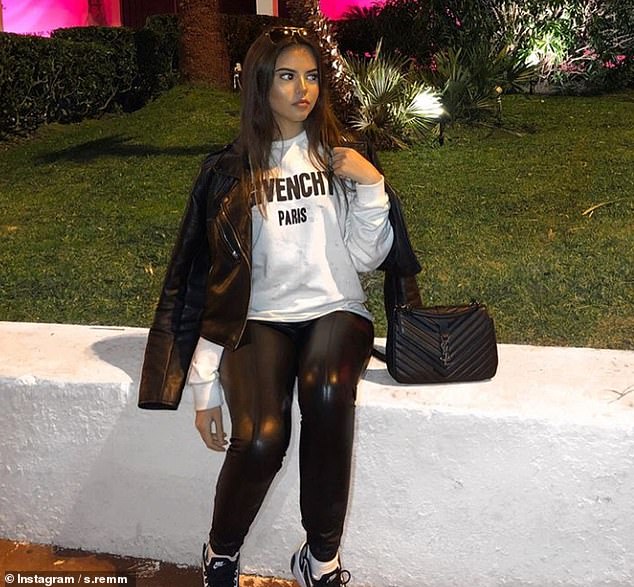 The heiress, whose father buys her business class plane tickets, is shocked to find out not everyone can afford to go on a holiday each year

For Roumaissa, the perspective of spending two to three nights in a static caravan isn’t too appealing, however, she has to adapt to the Copes’ way.

Upon seeing the caravan park, the rich teen asks her driver: ‘I’m scared, can we go back.’

With a lot of wincing and puffing, the wealthy heiress makes her way to the Copes’ caravan, saying she doesn’t know how she feels about staying in a caravan, but adding ‘but I’m gonna be nice.’

‘I never ever thought I’d ever go in a caravan,’ she adds, once settled in her room.

But when a spider crawls on her pillow, her brave face cracks and she jokes she won’t stay in the room because it is ‘infected of spiders probably’

Mother-of-three Nicky is particularly shocked by the heiress’s ostentatious taste for the finer things, asking her if she ever had to worry about anything, given her father funded her luxury lifestyle.

Nicky also struggles with the fact that the 18-year-old took more than an hour to get ready in her first morning, asking her to take less time for the remainder of their stay, so that her daughters can make the most of their holiday. 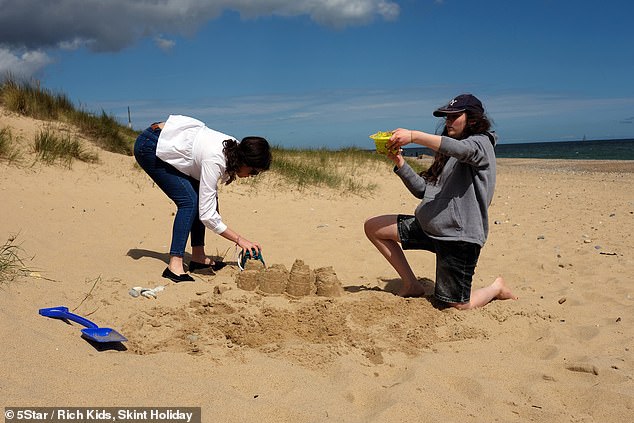 During her stay with the Copes, Roumaissa (pictured) is seen enjoying building sand castles with the eldest, Grace 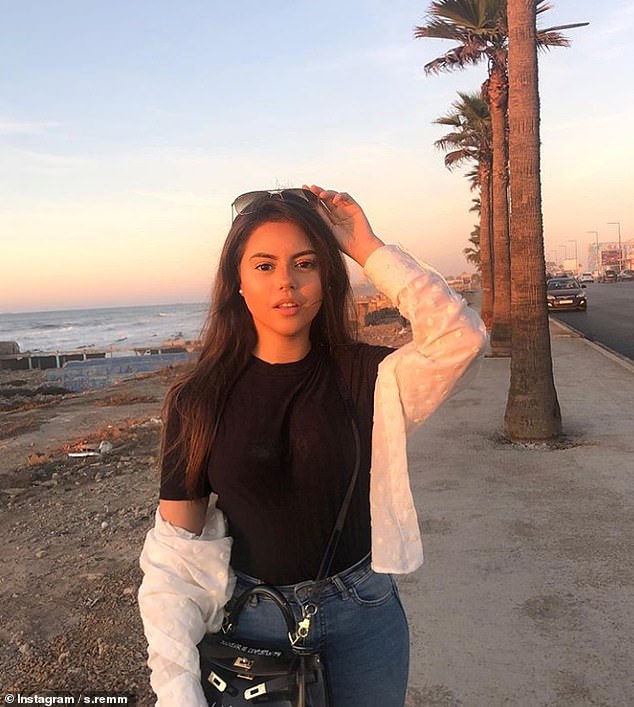 The heiress (pictured) spends £300 to $400 a week on fine dining and £500 on beauty treatments, and her allowance can be topped up by her dad 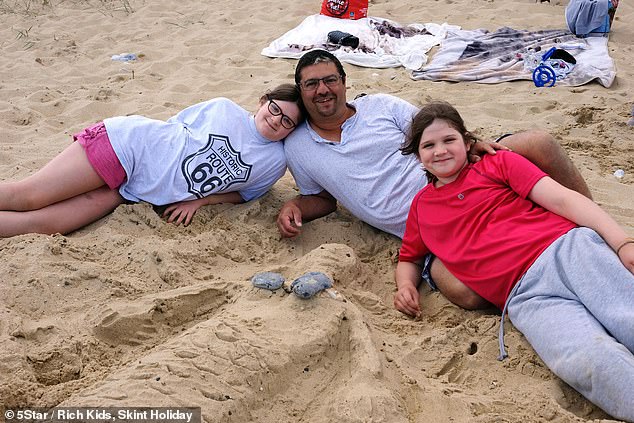 Neil with twins Lauren and Charlotte during a day at the beach with Roumaissa. The family challenges the rich kid to find them an activity and pay for their dinner on a £38 budget

Meanwhile, Roumaissa is woken up to the reality of the Copes’ budget, telling the camera after the family have gone to bed: ‘Nicky told me she earned less than a £1,000 a month, that’s a family of 5 people, I don’t know how they managed to do that.’

After a first day spent celebrating Nicky’s birthday, the second day of the family getaway is spent at the beach, which Roumaissa learned to enjoy.

The girls gather in pairs to have a sand castle building competition, which the heiress makes the most of.

After this first day, Roumaissa is put to the test by savvy shopper Nicky, who challenges her to pay for the family’s meal and activity on a budget of £38 the next day.

After some searching, the heiress manages to book some mini golf with the family for £18, less than half her budget. 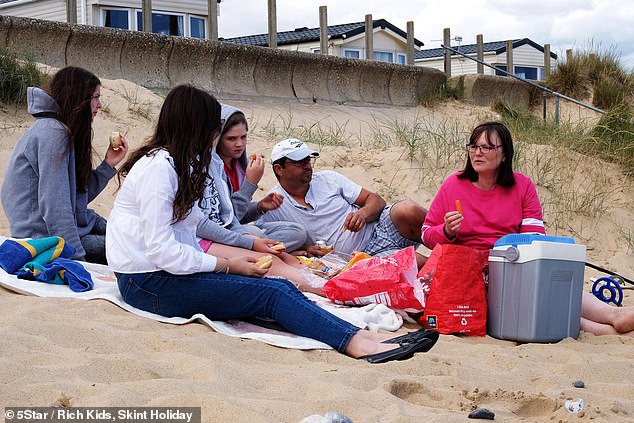 But when it comes to buying the family dinner in a corner shop, the heiress, who is used to shopping at Harrods rather than Nisa Local, loses her motivation and ends up buying ready made meals that she plans to pass as her own.

Nicky and the rest of the Copes are not fooled, however, but their polite compliments push Roumaissa to admit she has not cooked their meals but has simply reheated it.

After their meal, the family heads to the beach and later to the arcades, where Neil and the twins teach her how much fun she could have with just a few pennies.

‘I think I’m good at this,’ an excited Roumaissa says while collecting her slots.

The next day, to thank the family for welcoming her on their holiday, the heiress treats the Copes to a trip to the local zoo, which costs £175.

This includes a VIP activity: feeding the giraffes, which adorable Grace is delighted with.  The heiress, who had been looking forward to going home from the start of the holiday, finds it difficult to part from the Copes.