One reads “Kirk,” others appear to the say “AIDS” and one has a sideways 8 on a headstone — all of them in blue paint.

Austin told KEYE she was horrified to learn the headstone of one her family members was involved.

“My mother is here, I have uncles here,” said Roy Jones who was part of the steady stream of people who came to check on family headstones on Monday. “You wouldn’t want nobody to do that to your family.”

Whatever the meaning or purpose of the vandalism, the city’s Parks and Recreation Department says it was discovered Monday morning.

PARD’s John Nixon said it appears to have been random, adding that a police 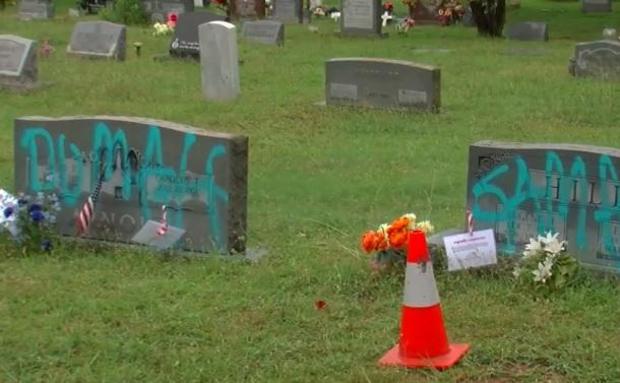 The Evergreen Cemetery was established in 1926 for Austin’s African American community.

Two years later, the city adopted a plan to explicitly segregate African Americans by only offering them city services east of what is now I-35.

Some of the many prominent members of the black community buried at the there include Dr. L. June H Brewer, one of the first African American students admitted to the University of Texas graduate school in 1950 and later an English professor at Huston-Tillotson College. Also, Elmer Akins, a radio announcer recognized as having the longest continuously running radio show in America in 2002 by the Texas Association of Broadcasters. It’s also is the resting place for Oscar Leonard Thompson, the first black graduate at the University of Texas.