Former Treasury secretary Ken Henry has warned Australians' trust in democracy is at risk if the federal government does not build institutions to restore public faith, starting with urgent work on a federal ICAC.

The Coalition has been promising a national integrity commission since late 2018, but has not revealed draft legislation completed in December last year. 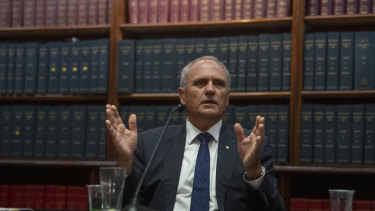 Former Treasury secretary Ken Henry has urged the government to move quickly to set up a national integrity commission.Credit:Louise Kennerley

Dr Henry, who served under both Coalition and Labor governments as secretary between 2001 and 2011, said he believed the government would establish a national integrity commission but that it was not moving fast enough.

"There is a hell of a lot at stake here," Dr Henry said. "You look at the way that social media is used these days. What is that saying? A lot of it is saying: 'we've given up on politics, we're taking makers our own hands'."

Attorney-General Christian Porter has blamed the government's decision not to release the draft legislation on the demands on the public service and ministry created first by the summer bushfires and then the coronavirus pandemic.

Speaking on the ABC's Q+A program on Monday night, Dr Henry said if that was true, it showed the public service was depleted.

"Honestly, when I was in government, the public service certainly would have been capable of producing the legislation and, indeed, establishing such a commission whilst dealing with multiple crises," Dr Henry said.

After departing Treasury, Dr Henry became a corporate heavyweight before losing his chairmanship of the National Australia Bank after a disastrous appearance in the witness box at the banking royal commission that was criticised as arrogant and defensive in 2019. The bank was in the spotlight over allegations, later admitted, it had charged fees for no service.

The experience had taught him that executives ought to speak more openly with their employees about ethical matters and more readily admit failings, Dr Henry said.

And he mused on whether politicians still felt accountable for failings in their ministries, such as the revelations the government had paid $30 million for land worth $3 million near where Western Sydney Airport will be built, even if they were unaware of them.

"Is it even the case today that if a minister misleads the House, that the minister feels obliged to correct the record as soon as is humanly possible, else the minister has to resign?" Dr Henry said.

Labor's Tanya Plibersek was quick to argue standards had fallen during the Morrison government. Liberal MP Dave Sharma said the opposite: ministerial responsibility in his view meant "getting to the bottom" of whatever had gone wrong.